Are there examples of d-regular graphs (i.e. graphs where every node has exactly d adjacent nodes) which are not the 1-skeleton of a simple convex polytope?

New version of the question: is there an example of a d-dimensional "simple" poset, i.e. a collection of k-dimensional "faces" with $k=0, 1, \dots, d$ equipped with partial ordering such that its 1-dimensional skeleton is a d-regular graph, which is not the face lattice of a convex polytope? (Obviously the partial order is to be interpreted as $X < Y$ if $X$ is contained in the boundary of $Y$).

It seems to be that the graph of the previous answer ($K_{3,3}$) cannot be interpreted as the 1-skeleton of a 3-dimensional simple poset.

We can represent the combinatorics of the face lattice of a d-dimensional convex polytope by giving the collection of its facets $F=\{X_1, \dots, X_F\}$ and vertices $V=(v_1, \dots, v_n)$ and representing each vertex as the intersection of at least $d$ facets, e.g. we can write $v_j = (X_{j_1}, \dots, X_{j_d})$ to say that vertex $v$ lies in the intersection of faces $X_{j_1}, \dots, X_{j_d}$. In particular if the polytope is simple, every vertex will be presented as the intersection of $precisely$ $d$ facets. I am only interested in this case, so let me assume that the set $V$ is always a set of $d$-tuples of elements in $F$.

From this data, we can read all the face lattice structure: two facets $X_a$ and $X_b$ intersect in the polytope if and only if there is at least one vertex containing both. Each facet $X_a$ is itself a polytope whose combinatorial data can be presented in the same way, i.e. by listing all the facets $X_b$ intersecting with $X_a$ and all the vertices lying on $X_a$. Clearly we can iterate down to any dimension.

Now suppose you are given a set of data $(F,V)$, and you are asked to understand wether there exists a simple polytope whose face lattice is given by $(F,V)$. You can do a number of combinatorical and topological checks on $(F,V)$: you can compute the euler characteristic and check that is 1, or you can compute all the homological groups of $(F,V)$ and see that they are compatible with those of a convex set. Admittedly, I do not know what is the set of $all$ checks one can do before trying to find an actual convex realisation of the polytope... My question is: is there a counterexample of a set of data $(F,V)$ that meets all these criteria, but is known not to arise from a simple convex polytope?

Another approach that comes to my mind are abstract polytopes which are defined purely in term of posets. Here, I have two explicit 3-dimensional examples from the class of projective polyhedra:

Similar examples can be obtained from all centrally symmetric simple polytopes.

Verification that $G$ is not the edge graph of a $4$-polytope. Consider what the $3$-faces of sch a polytope can be. Any $3$-polytope must have at least four vertices, and if it has exactly four then it is a tetrahedron, so its edge graph is a $K_4$. But $G$ contains no $K_4$, so none of its $4$-element subsets can be the vertices of a $3$-face. If all six vertices were the vertices of a $3$-face, then we would have a $3$-dimensional polytope, not a $4$-dimensional one.

We have now shown that there are at most two $3$-faces in our polytope, which is absurd.

Construction of a regular CW decomposition of $S^3$ with edge graph $G$.

This is the face structure of the totally nonnegative part of the Grassmannian $G(2,4)$. 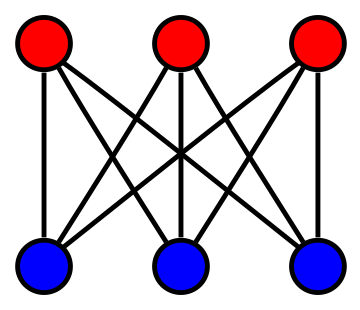 21
Can you determine whether a graph is the 1-skeleton of a polytope?
9
Minimal combinatorial data needed to define a polytope

1
Realizing not-quite-barycentric subdivision of a polytope
8
Classifying two-faces of four-polytopes
4
Simplex in convex polytope, pulling triangulation
2
4D Duoprisms based on nonconvex polygons
8
$f$-vector of simple convex polytope via directions of facets
2
how to get the coefficient of a special term in the expansion of the graph polynomial?
6
Problem with the vertices of a convex quadrilateral on integer lattice
2
What property of ranked poset ensures that it is determined by its vertex-facet incidences?
Question feed