Was Jacobi the first to notice the ambiguity in the partial derivatives notation? And did anyone object to his fix?

As he himself writes:

In order for the partial differentials, of a function which depends on more than one variable, to be completely determined, it does not suffice to provide the function to be differentiated and the variable with respect to which to differentiate; one must moreover express which quantities remain constant during the differentiation.

A longer excerpt can be found here.

Probably many others have made the same observation since then. Vladimir Arnold for instance makes it in a footnote to his Classical Mechanics. But partial derivatives already existed for 100 years before De determinantibus. (With a slightly different notation that has the same problem.)

Q1: Was Jacobi the first mathematician to point out the ambiguity?

In the same article, Jacobi also proposed a fix for the problem: he suggested we write $\frac{\partial z(x,y)}{\partial x}$ for the partial derivative when $y$ is held constant, and $\frac{\partial z(x,u)}{\partial x}$ when $u$ is held constant. This introduces a new problem, since it overloads the notation for function application $f(x,y)$, which already had an established and different meaning at that time.

Q2: Did no one object to the suggestion of Jacobi?

Finally, in many physics textbooks (thermodynamics in particular), the problem is fixed by writing $ \left(\frac{\partial z}{\partial x}\right)_y $ for the derivative of $z$ wrt $x$ when $y$ is held constant.

Q3: Who proposed this fix and when?

An extensive review of the history is given by Florian Cajori, The History of Notations of the Calculus.

Q1: Yes, it does appear that Jacobi was the first to explicitly state this ambiguity.

Q2: The German mathematician Paul Stäckel objected to the suggestion of Jacobi: "This notation is ambiguous too, for the symbol is used in two different meanings, in as much as $f(x, y)$ is another function of $x$ and $y$ than is $f(x, u)$ of $x$ and $u$."

Q3: The Irish engineer John Perry advocated the notation $\left(\frac{dz}{dx}\right)_y$. I reproduce Perry's 1902 Letter to Nature, where he says he learned this notation at school. 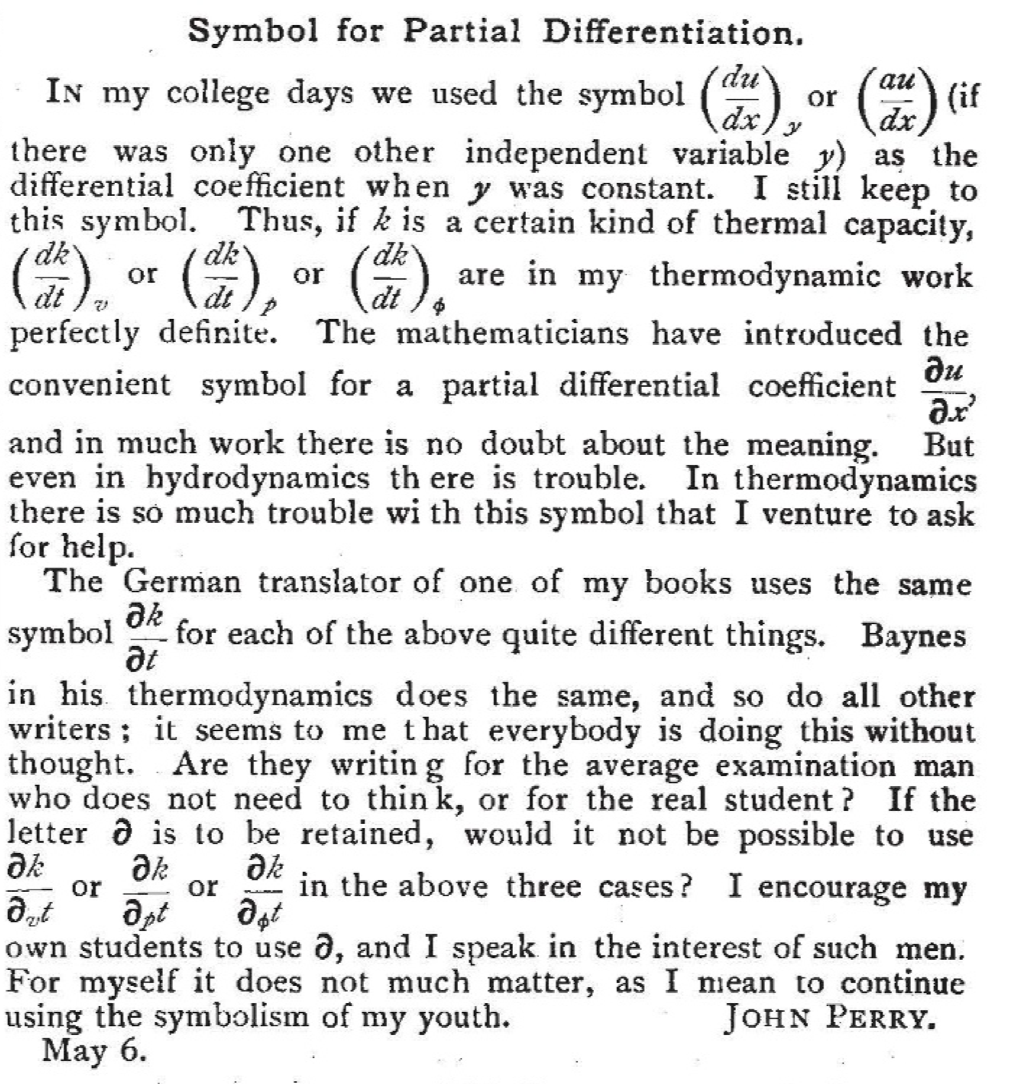 Not the answer you're looking for? Browse other questions tagged ho.history-overview notation differential-calculus or ask your own question.

14
When did the abuse of notation $y=y(x)$ start?
13
history of calculus of several variables
3
How to denote a partial derivative?

15
When was the "arrow notation" for functions first introduced?
1
Computing skewness derivative in terms of variance
84
Has incorrect notation ever led to a mistaken proof?
Question feed