How did Lefschetz do mathematics without hands?

If people think this is the wrong forum for this question, I'll cheerfully take it elsewhere.

But: How did Solomon Lefschetz do mathematics with no hands?

Presumably there was an amanuensis to whom he dictated his papers, and then dictated his revisions. Does history record that person's identity? Was it someone trained in mathematics? Someone we might have heard of independently? Or maybe a series of graduate students?

And what about the research phase, when most of us make a lot of idle notes, come back, revisit, cross things out, etc. Was Lefschetz also dictating all these idle thoughts to someone --- or did he learn to hold them in his mind until he was ready to write a paper? Or something else?

Or did he have some sort of prosthetics that allowed him to write?

I expect there are people alive --- and perhaps active on this site --- who were at Princeton during the time Lefschetz was active, or who have had direct contact with such people. Maybe one of them can answer?

Edited to add: If anybody is tempted to answer that "he used a Lefschetz Pencil, of course!", I've just pre-empted you. 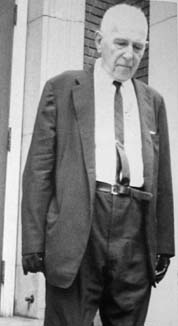 This quote [source] shows how Lefschetz overcame some limitations of his disability: 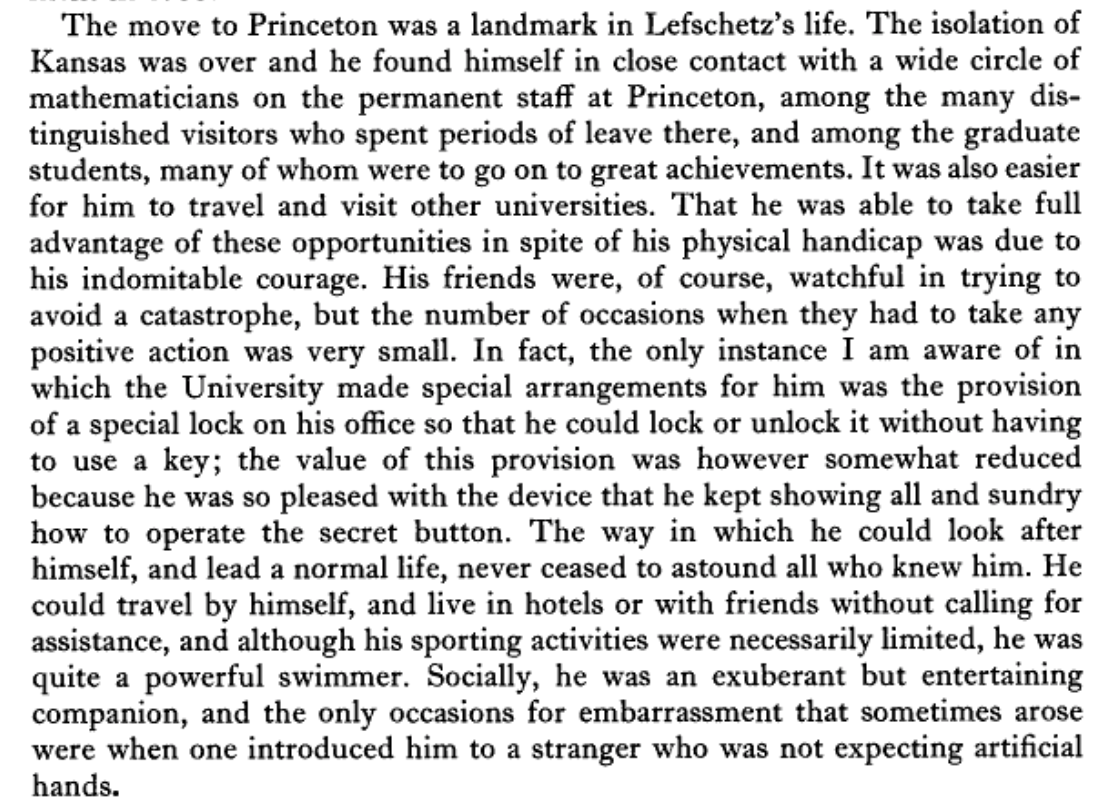 I just found this in Halmos's autobiography: "The natural hands were replaced by a neat-looking pair of wooden hands, covered by gloves. As prosthetic devices they were awkward, but they were good enough to hold a pen or a piece of chalk."

I guess this question can be closed or deleted now

Surely his wife, nee Alice Berg Hayes, deserves much credit. She graduated with a master's degree in mathematics at Clark, with a thesis on "Reduction of Power Determinants". This was where she met Lefschetz, and she received her M.A. on the same day that he received his Ph.D.

Albert Tucker and Frederik Nebeker said in the Dictionary of Scientific Biography:

She helped him to overcome his handicap, encouraging him in his work and moderating his combative ebullience.

of debts which I may never succeed in liquidating to the full...the first is my enormous debt to my wife Alice, my Clark companion. Without her constant and unfailing encouragement through 59 years, 56 as my wife, I would have long since ceased to operate.

Not the answer you're looking for? Browse other questions tagged ho.history-overview biography or ask your own question.

15
When did Grothendieck join Bourbaki?

36
Great mathematicians born 1850-1920 (ET Bell's book ≲ x ≲ Fields Medalists)
91
Pseudonyms of famous mathematicians
11
How quickly did Gödel's Incompleteness Theorem become known and heeded throughout mathematics
21
How did "Ore's Conjecture" become a conjecture?
64
Trichotomies in mathematics
32
Similarities between Post's Problem and Cohen's Forcing
6
What did Zermelo say he was hoping for on the consistency of set theory?
19
Did André Bloch or any other mathematician receive the Becquerel Prize?
28
Who was H. Vogt?
62
Identity of J. L. Rabinowitsch (of Rabinowitsch Trick)
Question feed