Fundamental results in percolation theory are all based on the assumption that the system sizes are infinite, as the spanning/percolating cluster is by definition an infinitely sized cluster that connects the entire system (e.g. end-to-end). However, in reality or at least in simulations, one is often dealing with finite systems, where all percolation related transitions are smeared out. So in order to determine the percolation threshold, one performs a finite size scaling analysis, where for instance the percolation strength (or probability) is computed as a function of occupation probability and repeats this for a range system sizes. Then, it is expected that if the studied systems have been large enough their curves will cross at a common point, which can be taken as an accurate estimate of the threshold in the limit of infinite system sizes.

These systems could be:

Example taken from these lecture notes: 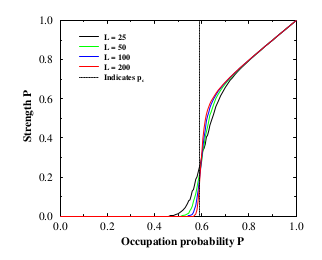 Clearly, these systems have quite different details, but the fact that the same estimation method for determining $p_c$ is expected to hold generally, is unclear to me. I understand that if we take the comparison of system size $L$ and the correlation length $\xi,$ then there are two important regimes:

tdlr: My attempt is to simply understand why this method works for estimating $p_c$ of so many widely different systems and what implies the intersection point, or at least how can we judge if it is going to work for a chosen problem. In many works, one often read "if the systems are large enough..." but I don't understand how large is supposed to be large enough.

In summary, you have a quantity $g$ that depends on system size $L$ through a powerlaw function $F(u_0L^{1/\nu},u_1L^y)$, with exponents $1/\nu>0$ and $y<0$. In the large-$L$ limit only the $L^{1/\nu}$ term matters, that is the "scaling law" and $\nu$ is called the critical exponent. The $L^{y}$ term is the leading order correction to scaling. You perform a Taylor expansion of $F$ in powers of $u_0$ and $u_1$, up to some order $N_0$ and $N_1$, respectively. Then you fit the data to that functional form, with the coefficients of the Taylor expansion as the fit parameters. The result converges to something like the plot below (from the cited paper), and allows you to extract both the critical exponent $\nu$ as well as the critical point. 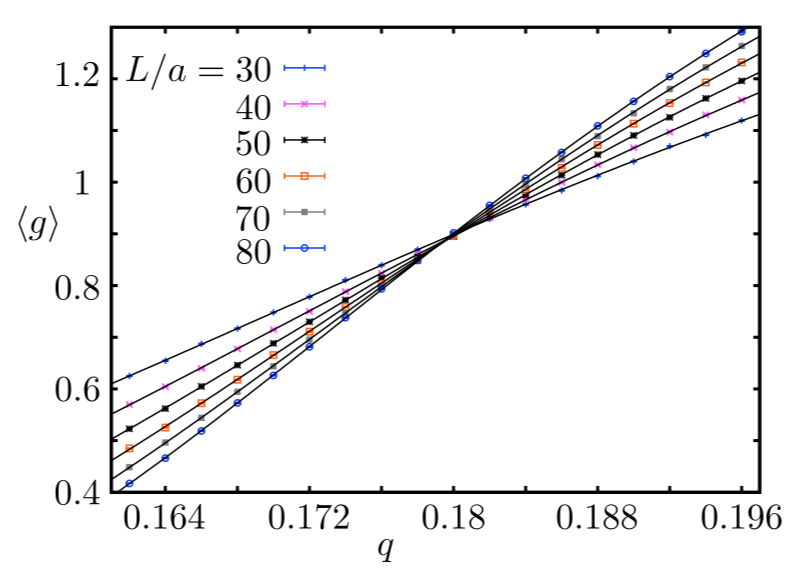 To answer specifically the first question: the functional form of $F$ is chosen such that there is a common intersection point by construction. If you fail to achieve a good fit, it indicates that the system has more than a single relevant scaling variable in the large-$L$ limit. That is certainly possible, but the physics of many phase transitions it that indeed, single-parameter scaling applies. So all microscopic parameters become irrelevant at the transition point, because of a diverging correlation length.

To answer the second question: the finite-size corrections to scaling are included in the fit, and you add higher and higher order terms until you reach a chi-squared value per degree of freedom of unity.

Not the answer you're looking for? Browse other questions tagged pr.probability mp.mathematical-physics statistical-physics percolation or ask your own question.

4
Critical Exponents for Island Mainland Transition (Percolation Theory)
2
Proof and interpretation of the following percolation theory result for $n\times n$ square grid
1
Does there exist any analogous result for site percolation?
2
Generalization: (The "number" of) smaller sized clusters in large random binary matrices follow a descending order. Why?
1
Percolation critical exponent $\nu$ does not depend on neighborhood connectivity. Does this follow from the universality principle?
1
Understanding the wrapping criterion in percolation theory
Question feed