On a corollary of a paper by Colin and Honda

The question is about the last sentence of the last corollary of Stabilizing the monodromy of an open book decomposition by Vicent Colin and Ko Honda. This question is also related to this other question of mine https://mathoverflow.net/posts/330596/edit.

The corollary of the aforementioned article says:

$\textbf{Corollary 3.1}$ Let $S$ be a surface with connected boundary $\partial S$ and let $h:S \to S$ be a pseudo-Anosov automorphism with fractional Dehn twist coefficient (at the only boundary component) greater than $2$. Then, any elementary positive stabilization along a non-boundary-parallel arc $\gamma \subset S$ is pseudo-Anosov.

The vast majority of the proof consists in showing that the stabilization $h'$ is not reducible. Then in the last sentence they conclude that it also cannot be periodic. Hence, by Nielsen-Thurston classification it must be pseudo-Anosov. However this last part is proven as follows in the last sentence of the paper:

To show that $h'$ is not periodic, consider $\delta = \partial S$. One easily verifies that the number of intersections with $a$ (the co-core of the handle used for stabilizing) increases with each iterate of $h'$.

They use all the hypothesis of the theorem to provide a proof for the first part and the way this last sentence is writen looks as if the last part was true in a more general setting.

The thing is that I cannot easily verify that. What I can easily verify is that the number of intersections of $h'(\delta)$ with $a$ is certainly $2$ (without using that $h$ is pseudo-anosov. I can also produce examples (see the edit below) of a periodic automorphism with connected boundary which, after a suitable positive stabilization, becomes a periodic automorphism aswell. So, in order to prove the last part we need to use that $h$ is pseudo-Anosov at some point, or the part on the fractional Dehn twist coefficient maybe. But it is not obvious to me why there are no relations in the surface that "un-wind" the twisting induced by the stabilization as in the examples that I can produce.

The rest of the question is an example that I claimed I could produce. It serves as a counter-example to Michael Lin's answer and it also serves as an example that the hypothesis on $h$ must be used. Also, since I have drawn some pictures, I hope this questions gets some more attention.

The monodromy of the $A_2$ singularity $x^2+y^3: \mathbb{C}^2 \to \mathbb{C}$ consists of the composition of two right-handed Dehn twists around a "parallel" and a "meridian" of the torus as in the picture (that I quickly made) below that I just made. The monodromy is the composition of the right-handed Dehn twist around the blue curve and then around the green curve. You can see this in the paper of A'Campo for example or in any introductory text to Picard-Lefschetz theory. That this monodromy is freely periodic of order $6$ follows from the observation that a representative of the monodromy is $(x,y) \mapsto (e^{\pi i}x, e^{2\pi i/3}y)$. 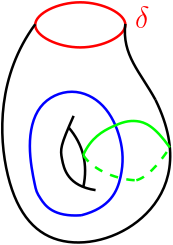 Losely speaking: in Singularity Theory "adding a Morse point" is more or less the same as "stabilizing". The singularity $x^2 +y^3$ "consists" of two Morse points. That is, after a generic perturbation it deforms to two Morse points. Also, its Dynkin diagram is the graph consisting of two vertices joint by a segment. Again, for more details on this, follow A'Campo's paper.

The description of the monodromy is the composition of a Dehn twist around the blue curve, then the green curve and then the yellow curve (observe that the last two Dehn twists commute since their support is disjoint) This part can also be deduced from A'Campo's article. That the monodromy is freely periodic follows from the same reasoning as before. For instance, a representative is $(x,y) \mapsto (e^{\pi i}x, e^{\pi i/2}y)$. Which has order $4$.

You don't have to use any of the hypotheses on $h$. $a$ is the co-core of the band, which intersects the twisting curve $\gamma$ exactly once, so $|h'(\delta) \cap a| = 1$. Examining the image of $\delta$ under iterates of $h'$ the along the band, you can see that the action of $h$ doesn't do anything (is the identity) and the Dehn twist causes $\delta$ to run along the band an additional time.

1
What does it mean for two natural numbers to be *approximately equal*?