Is there an intuitive geometric proof of this, that in particular explains why you drop 2 coordinates, as opposed to 1 or 3 or ...? Or even some heuristic that explains the 2?

I already know reasonably slick probabilistic proofs of this result, including a version for $\ell_p$ norms when $p$ is an integer and you project onto the first $n-p$ coordinates (using the right distribution on the $\ell_p$ sphere, which is not surface area except for $p=1,2$), but as far as I can see they just make it look like a coincidence that things turn out this way. (And as far as I know, maybe it is.)

One viewpoint, which is a bit gauche for your construction but valid, is that the general result is a corollary of Archimedes' theorem, that the projection from a 2-sphere $S^2$ to an interval $I$ is measure-preserving. Whether or not you view it as a coincidence, Archimedes' theorem has an important generalization. Namely, $S^2$ is the simplest example of a projective toric variety, and the coordinate projection is its toric moment map. The moment map of any projective toric variety is measure preserving. For instance, the moment map from $\mathbb{C}P^n$ to the $n$-simplex shows you that the Fubini-Study volume of the former is $\pi^n/n!$. You might also recognize this as the volume of the unit ball $B_{2n}$. There is a simple symplectic map from $B_{2n}$ to $\mathbb{C}P^n$ which is 1-to-1 in the interior and quotients the boundary to $\mathbb{C}P^{n-1}$. (I learned/realized these facts in an old discussion with Doug Ravenel and Yael Karshon.)

So you could say that the original relation has a good explanation in complex and symplectic geometry, and that the explanation has been disguised a bit in real geometry. Moreover, that 2 arises because $\dim_\mathbb{R} \mathbb{C} = 2$.

Turning around the same ideas than previously exposed (I am not sure there exist two fundamentally different arguments), let me give a rough geometric proof.

Assume you project the uniform measure on $\mathbb{S}^{n-1}$ on $\mathbb{B}^{n-k}$. To compute the density of the projected measure with respect to Lebesgue measure, you have to take into account two factors :

I find myself very confused by all this, and I suspect I must be missing something very important, and I am hoping someone (Greg?) can set me straight.

The Archimedes projection that has been mentioned several times is very different---it is the projection of $S$ to the right circular cylinder $C$ tangent to the sphere along its equator. I agree that this is measure (i.e., area) preserving. (Who am I to argue with Archimedes?) On the other hand, the projection mentioned by the OP is dimension reducing so we seem to be comparing the area of a region with length of its projection.

Now the projection of S onto I can't be measure preserving can it? First of all it doesn't seem to be dimensionally correct. Consider for example a small spherical cap of radius $r$ centered at $(0,0,1)$. To first order its area is $\pi r^2$. However, its projection is the interval $[-r,r]$ which has length $2r$. How can these quantities be proportional? Even worse, if we apply a rotation, the area of the spherical cap stays constant, but the area of its projection varies wildly.

It sounds to me like I must be somehow misinterpreting the original question, but I haven't been able to re-interpret it in a way consistent with its wording.

In a comment Mark Meckes asked about an argument to reduce the $n\geq 4$ case to the $n=3$ case. Let $n\geq n'\geq 3.$ A smooth function on a convex set $B$ is constant if and only if the restriction to every $B\cap S,$ where $S$ is an $(n'-2)$-dimensional affine subspace, is constant. At least intuititvely, this means the pushforward measure on $B^{n-2}$ from the projection $S^{n-1}\to B^{n-2}$ is uniform if and only if there is a uniform conditional distribution for each $(n'-2)$-dimensional subspace. But fixing such a subspace corresponds to restricting to a scaled version of $S^{n'-1}\to B^{n'-2}.$ This implies that the results for $n$ and $n'$ are equivalent.

Caveat: I gloss over constants, but it still holds.

Consider the basic case of projecting the 3-d sphere $S^2$ onto $B^1=I$. Let's answer the question what is the probability of a point (x,y,z) having z value between z and z+dz. If we use spherical coordinates, we have $\sin(\varphi_1)=z$. The probability of a "belt" is its area. The area is the width $d\varphi_1$ times the circumference of a circle at that "latitude" $\varphi_1$ which has radius $r=\cos(\varphi_1)$:

But since $\sin(\varphi_1)=z$, taking differentials we have $\cos(\varphi_1)d\varphi_1=dz$. Intuitively, this is because the width of the belt has an angle with respect to the z axis, so for example close to the pole a small segment in z produces a very wide (though short) belt, in a way that just cancels out.

If $n \neq 3$ this probability now is dependent on $x_1$. But if we reduced it not to a single coordinate $x_1$, but to a shape which has the same density as a function of $x_1$ we could have a uniform distribution over that shape. The ball $B^{n-2}$ has precisely this density as a function of $x_1$. If we don't reduce the dimension by 2, but by something else, we would not have the right density for each belt in $x_1$. If you think about it, for reasons of symmetry if it holds for $x_1$ it follows that it's uniform on the ball, but I'm not going for a full proof here.

These are the closest illustrations I could find. 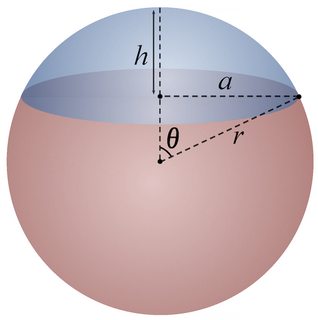 Not the answer you're looking for? Browse other questions tagged pr.probability mg.metric-geometry geometric-probability or ask your own question.

19
Anti-concentration of Bernoulli sums
2
Countably many random vectors and related problems.
8
Stochastic Covering Number of a Convex Set
6
maximal distance of nearby iid unifrom random variables
4
Distribution of the individual coordinates of a uniform random vector on a high-dimensional sphere
5
The square modulus of coordinates of a uniformly chosen point in complex projective space is uniform in the simplex
2
Volume computation using probabilistic approach
10
Marginal density of uniform spherical distribution
5
Probability of gaps between coordinates of a random point on the sphere
Question feed