Third differential in the homology AHSS

I need some guidance in identifying the third differential in the homology AHSS for $\Omega_{\ast}^{\text{Spin}^c}(X)$ in degrees $\leq 4$. 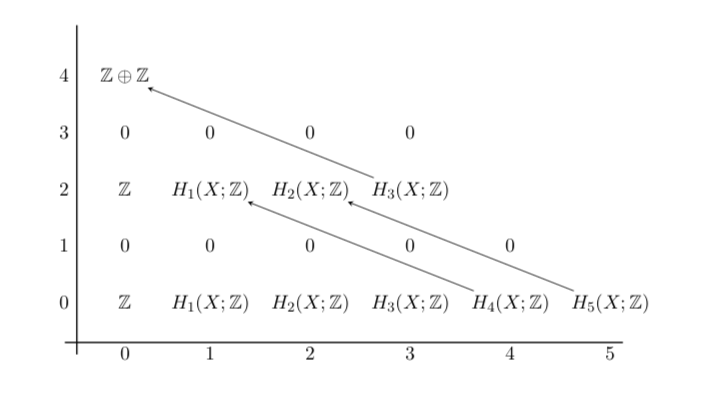 Can I conclude something akin to the cohomology AHSS (See here) where the first non-trivial differential is a stable cohomology operation? what bothers me is that having to deal with integer coefficients homology I don't have (in general) a perfect pairing with cohomology where the linked question would apply.

Is there an isomorphism in low degree homotopy group for $M\text{Spin}^c$ (I'm thinking of something like $M\text{Spin}$ is weakly homotopy to $ku$ up to degree $7$.) We could leverage this to compute the AHSS, but I can't find much online.

Any comments/observations are really appreciated! Thanks a lot!

The realification map $BU \to BSO$ lifts through $BSpin^c$, because the first Chern class provides an integral lift of the second Stiefel-Whitney class. Calculating with the Serre spectral sequence for the homotopy fiber sequence $K(\mathbb{Z}, 2) \to BSpin^c \to BSO$ I get that $H^*(BSpin^c; \mathbb{F}_2)$ agrees with $\mathbb{F}_2[w_2, w_4, w_6, w_7]$ in degrees $* \le 7$, so that $BU \to BSpin^c$ is $6$-connected after $2$-completion. (I have not checked this against other sources, so caveat emptor.) It follows that $MU \to MSpin^c$ is $6$-connected, also after $2$-completion. Hence $Spin^c$-bordism agrees with complex bordism in the range of degrees you say you are interested in, and the Atiyah-Hirzebruch spectral sequence for $MSpin^c_*(X)$ agrees with that for $MU_*(X)$, after $2$-completion, in vertical degrees $* \le 5$. (Do you care about odd primes?)

Not the answer you're looking for? Browse other questions tagged at.algebraic-topology spectral-sequences cobordism or ask your own question.

16
On the wikipedia entry for Borel-Moore homology
5
When does a cohomology class induce an isomorphism between homotopy groups?
16
Cohomology class of the group extension from a principal bundle
6
References for properties of Atiyah-Hirzebruch Spectral Sequence for a spectrum $X$ and generalised homology theory $MSpin_*$
11
Understanding Homology Operations and how to compute them
10
$\pi_{2p^kn - 1}(P^{2n+1}(p^r))$ contains a $\mathbb{Z}_{p^{r+1}}$ summand
3
Fundamental group of twisted loop space
Question feed