Are there two deformations of a wire loop such that neither can pass through the other?

My 10-year old son asked me this simple question, and I've been unable to answer it.

Suppose we start with two (unlinked) circular wire loops (maybe different sizes), and allow both to be continuously deformed in three-dimensional space, the only constraint being that different parts of the loop mustn't touch. The two loops can be deformed in different ways.

Is it possible to do so in such a way that neither of the loops (now considered rigid) can be passed through the other by rigid motion? Consider the wire to be one-dimensional; the definition of 'passing through' permits the two loops to touch (as is obviously necessary in the case of two identical circles), but not to cross each other.

For a formal definition of 'passing through', suppose the two loops are A (fixed) and B (moving). If there is a point on B that traces a path C through space as we move B, such that C is a closed loop that is linked with A, then we say B has passed through A.

Edit Joseph O'Rourke has given an interesting example where the wires are 'interlocked'. So I'd now like to add a condition to exclude this situation, and say that, prior to the 'passing through', the wires must be separated (occupying different sides of some plane).

Edit Experimenting with garden wire, inspired by some of the comments below, I came up with a configuration that may work: 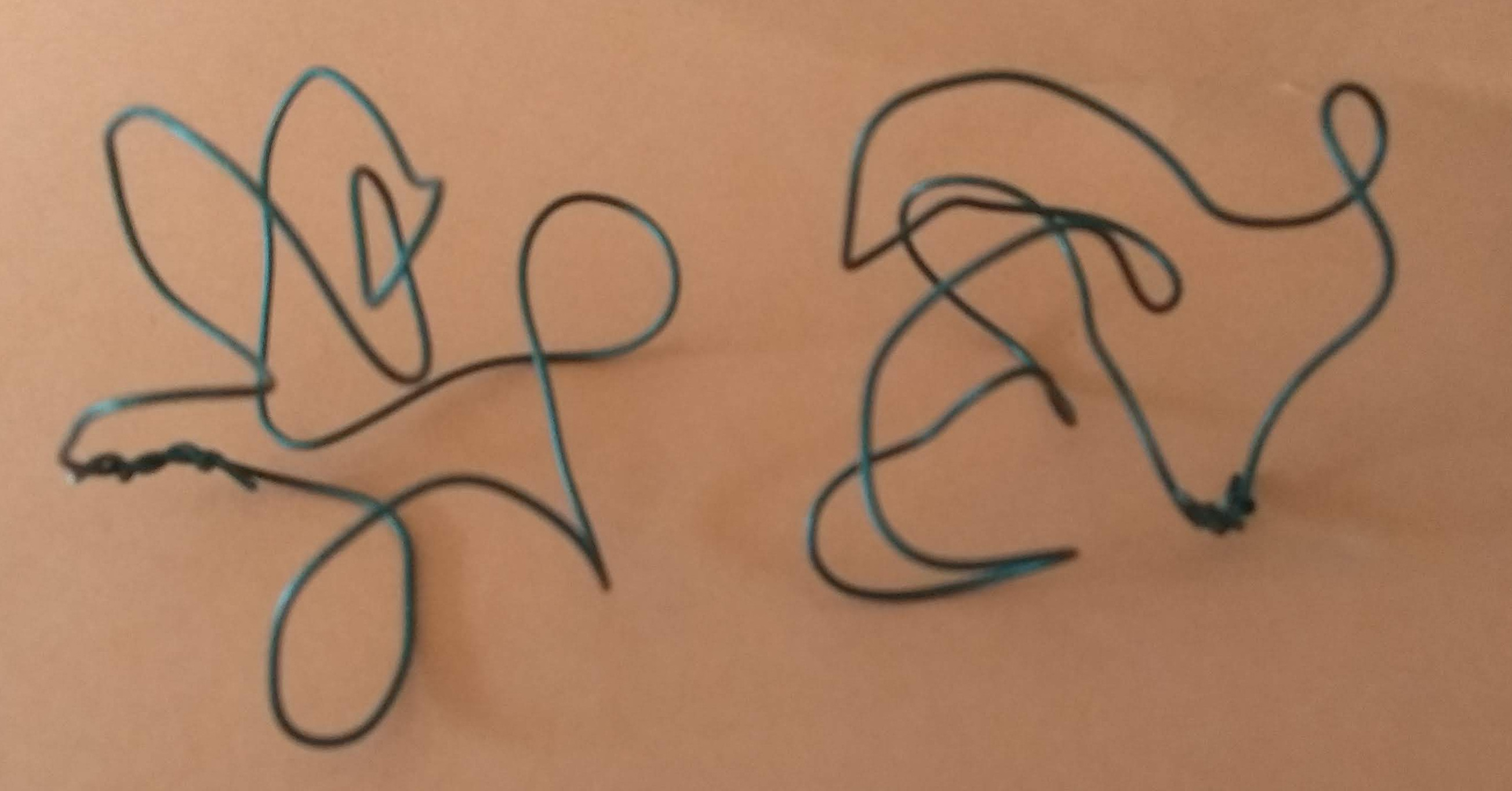 But even with this I am not certain. Ideally I'd like a simple provable example. In particular, could there be an example where both loops are planar?

I think there are quite a few examples. Here is one that is the tip of a family of ideas.

I'll start by describing a slightly more pliable definition of what it means for one loop to pass through another. This can be done without too much technical detail, as we are moving our loops with rigid motions.

The loop $L_1$ passes through $L_2$ (once) if, in the family of loops, any point on the spanning disc $D_1$ intersects the spanning disc $D_2$ transversely exactly once (through the motion). To make this definition fully general you'd need to bring in some transversality theory, but let's ignore that detail for now. 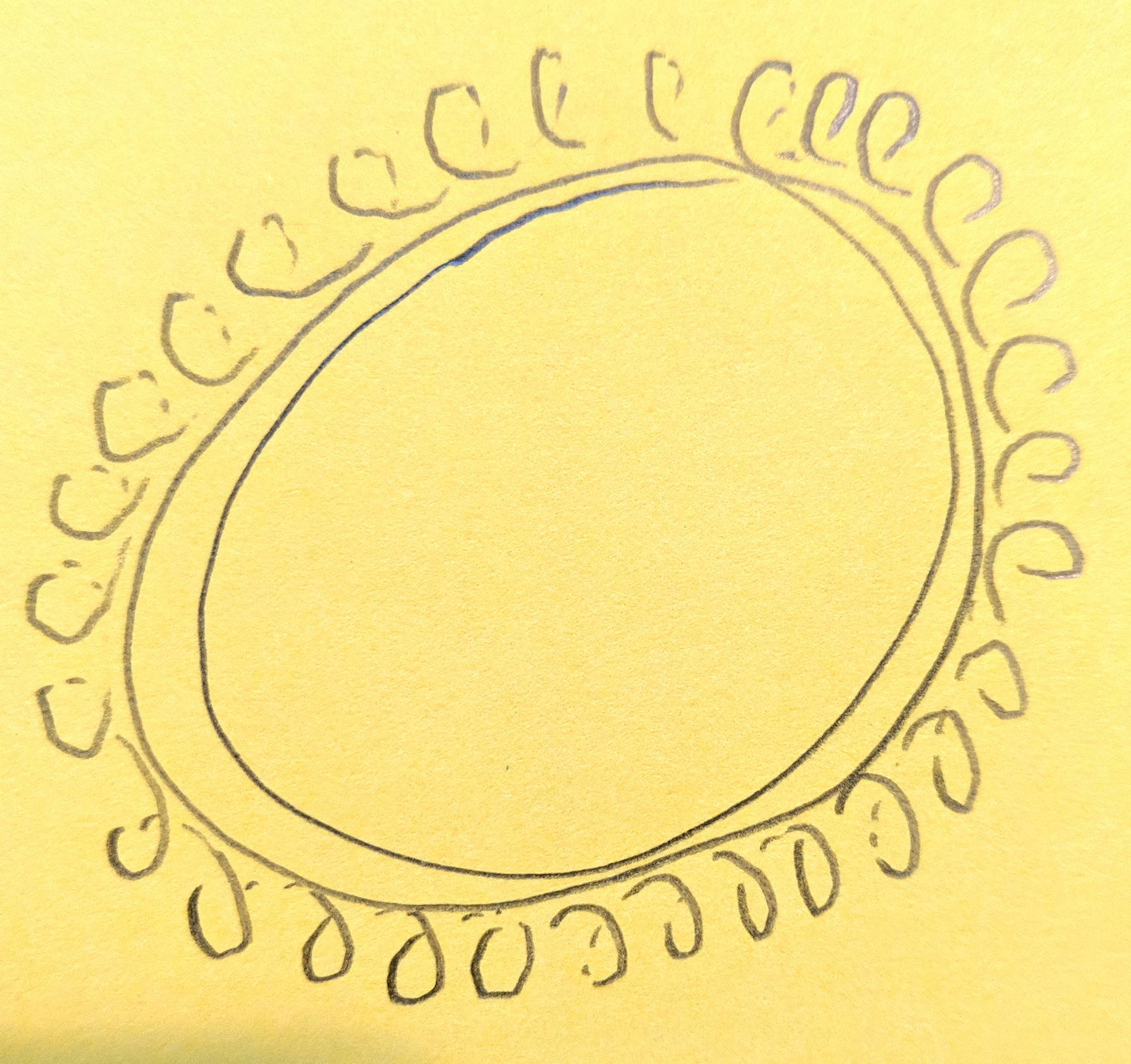 If you think about the rigid motions that put the loop $L_1$ so that its centre is on the spanning disc $D_2$, they either force $L_1$ and $L_2$ to intersect, or they link.

I hope that makes some sense.

It is relatively easy for even flexible chains (rigid links joined by universal joints) to be interlocked—cannot be separated to $\infty$—(although not easy to prove they are interlocked). 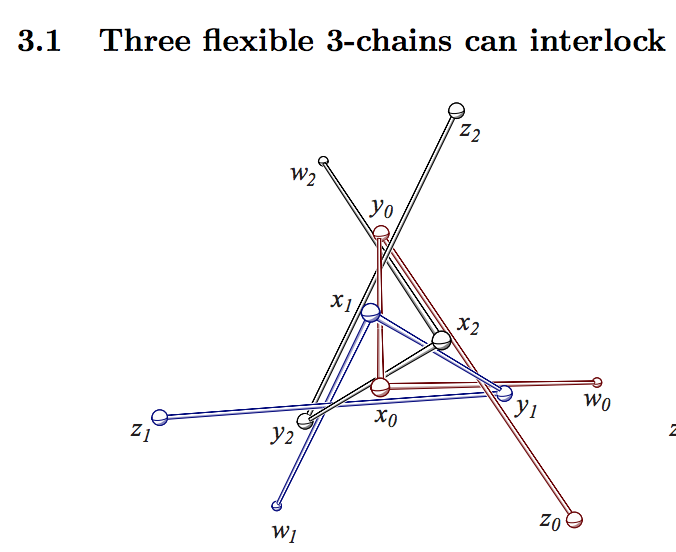 So it is even easier to arrange for two rigid chains to interlock.

One could reform the "wire loops" into thin ellipses, and treat them as 1D wires bent into the forms of the interlocked linkages displayed. Finally, expand one of these "wires" to a loop enclosing the other nearby wire. Then we have a way-overboard proof that two rigid loops can interlock, and so neither can pass through the other.

I think the job can be accomplished with two non looped wires. Wrap one in a coiled loop with (say) five turns or more, so it forms a small near circle. Then use the other wire and wrap it around like you are gift wrapping a donut, except you only have ribbon and do not want the color of the donut to show. Arrange this second wire so that both ends are on the outside of the torus.

Wait ! you say. If we are dealing with wires, can't one take the end of the first wire, poke it through the wrap, and with five or more rotations free the inner wire from the enclosing torus? I admit that maybe you can. So to defeat that, use Gabe K's twist idea to form the inner coil. Now any rigid motion to pass the inner wire through has to rotate the circle outside the enclosing torus.

I've decided to weaken the problem to allow a proof to become more clear, and to make more rigorous the notion of "pass through". Let a deformed loop be given a soap bubble, a surface much like a minimal surface with the loop as boundary, but we use it to help define the notion pass through. If an object such as a probe comes from elsewhere and deforms the bubble by epsilon, the bubble breaks, and the probe is said to have passed through the loop. I assert without proof that whatever reasonable notion is present in the original problem, it implies this notion of pass through.

Now for step one. Take a wire loop and bend it around a pipe, and then give it a bubble which is shaped like the pipe. (I know this is not quite minimal as a surface in differential geometry, but it should still help.) The part of the bubble that touches the pipe is the inside, and the other side is the outside. If I have two such bubbles, I can't break one with the other by placing the insides together: I have to rotate one to pierce the other. Now the idea is to build a shape where this does not happen.

As before, bend the loop into a thin ellipse, then wrap it several times around a one inch pipe, and leave the ends tucked on the outside away from the pipe. Take the other and make a torus wrap around it with inner diameter 3/4 inch and outer diameter 1 3/4 inch. Make sure the ends of the torus loop stick out away from the circle.

Now the only parts of the loops that can get close to one another are like two insides. We can change the inner and outer diameters so that no penetration of epsilon/2 is possible without deforming either loop further.

It would be interesting to see if the (differential geometry version of the) minimal surface version also holds.

5
What is the smallest diameter ring a non-convex polyhedron can pass through in 3-space?
6
Untangling entwined rigid chains in 3-space
14
Can a tangle of arcs interlock?
7
Can a tangle of arcs interlock in plane?
10
Tangled random triangles: One giant component?
19
Simple connectedness under a metric undistortion condition: on a tricky point in an argument of Gromov
10
How many small dots can be drawn in a region such that no three are “collinear”?
Question feed