Mathematics of imaging the black hole

The first ever black hole was "pictured" recently, per an announcement made on 10th April, 2019. See for example: https://www.bbc.com/news/science-environment-47873592 .

It has been claimed that state-of-the-art imaging algorithms were an enabler for this historic success. Does anybody care to describe the difficulties, and (quite certainly non-trivial) mathematics that went into this effort ?

The difficulty of VLBI (Very Long Baseline Interferometry Image) reconstruction is that the inversion problem is highly-ill posed, there are many images that explain the data. The challenge is to find an explanation that respects our prior assumptions about the “visual” universe while still satisfying the observed data. Bayesian approaches are generally employed for that purpose, in CHIRP machine learning is used to automatically identify visual patterns --- obviating the need for hand training of the algorithm.

A key technical innovation is a way to correct for the delays in the signal received from the various telescopes. The delays are difficult to predict, since they depend the local variations in the speed of the radio waves through the noisy atmosphere. CHIRP adopts an algebraic solution known as phase closure to this problem: If the measurements from three telescopes are multiplied, the extra delays caused by atmospheric noise cancel each other out.

One test case that shows the resolving power of CHIRP, compared to a competing algorithm (BU) is shown below (taken from the MIT paper). Notice how CHIRP is able to resolve 2 separate, previously unresolved, bright emissions in the blazar OJ287. 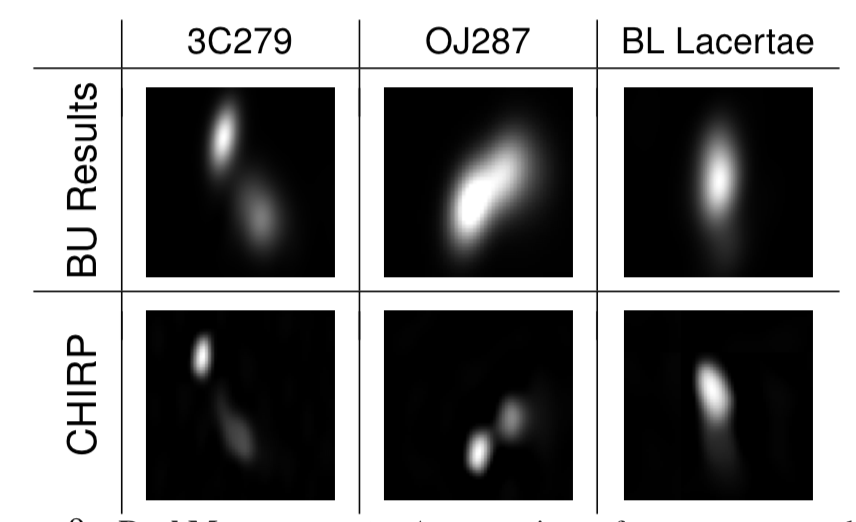 $^*$ UPDATE: This statement must be qualified, as stated by the lead author, Katie Bouman: “No one person or algorithm made the image. It was actually made by combining the images produced by 3 separate imaging pipelines, leading to a more powerful result than we could ever achieve with any single method.”

Not the answer you're looking for? Browse other questions tagged signal-analysis inverse-problems machine-learning image-processing popularization or ask your own question.

13
Mathematics for machine learning
1
Estimating the derivative of a noisy, non-uniformly sampled function
23
Mathematics TV clips
14
Switching from pure mathematics (e.g. geometry) to more applied areas (e.g imaging) after Ph.D., as postdoc and chance of getting such a postdoc?
2
Choosing the order of Tikhonov regularization of an inverse problem
9
When is a mapping the proximity operator of some convex function?
Question feed