What makes Graph invariants so useful/important?

What makes Graph invariants so useful/important? If I were trying to create a useful graph invariant, what principles should I follow?

My understanding is that they allow one to isolate and study specific properties of graphs algebraically or to classify graphs up to isomorphism (although, it seems to me that canonical labellings are the right tool for this).

However, important graph invariants are constructed from counting proper colorings of a graph, for an appropriate definition of proper. A priori, why do we know that those graph invariants isolate and study specific properties or is there some other key motivation for graph invariants?

If you want to decide “is graph $G$ isomorphic to graph $H$?” then easily computed invariants like number of vertices might easily tell you no. If they fail then you can try harder. But invariants are useful for more than deciding isomorphism.

The girth (length of the shortest cycle), chromatic number, clique number all seem pretty useful. A canonical labeling won’t get you very far toward determining what they are.

As far as how one would create a “good” graph invariant, I think that isn’t the right thing to ask. Instead, start with a question you find interesting and see what invariants it leads to.

You might start with a question like “when can a graph be drawn in the plane without edge crossings?” Which is itself an attractive invariant. Then you could be drawn to thinking “well, all but one with up to 5 vertices...” and end up with the useful but not obvious idea of graph minors which turn out to be widely useful.

In some cases we also might want to know if there are or could be graphs which have a certain mix of invariants such as regular of degree $r$ with $n$ vertices. Then the invariant “number of edges” is $\frac{rn}2$ which tells you that $r$ and $n$ can’t both be odd. That is a basic example but there are spectacular results obtained by considering the distinct eigenvalues and multiplicities (a negative or non-integer multiplicity says “no way!”)

LATER Since you ask, here is an example of my claim that the invariant arises from a question. Map coloring leads to Problem: show that every planar graph enjoys the (invariant) property of having a proper $4$-coloring. This leads the one to define the chromatic function $P(G,c)$ as the number of proper colorings of the given graph $G$ with $c$ colors to show $P(G,4) \gt 0$ for planar graphs. Once you start to investigate there is the perhaps unexpected discovery that $P(G,c)=p(c)$ for a polynomial $p=p_G(x).$ By that time the chromatic polynomial seems well motivated and finding that $p(-1)$ counts acyclic orientations just ups the ante. Read Wikipedia for details.

There are intervals of the real line which can not contain any zeroes of a chromatic polynomial ( for example $(0,1)$ and $(1,\frac{32}{27}]$ ) and also some intervals which can’t do so for a planar triangulation of a sphere. Alas, no one has shown algebraically that $4$ belongs to such an interval.

Two classes of graphs with bounded treewidth are the Halin graphs and pseudoforests: 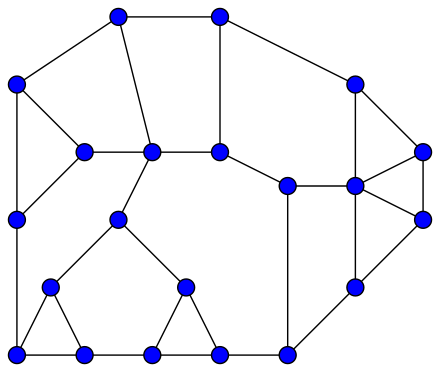 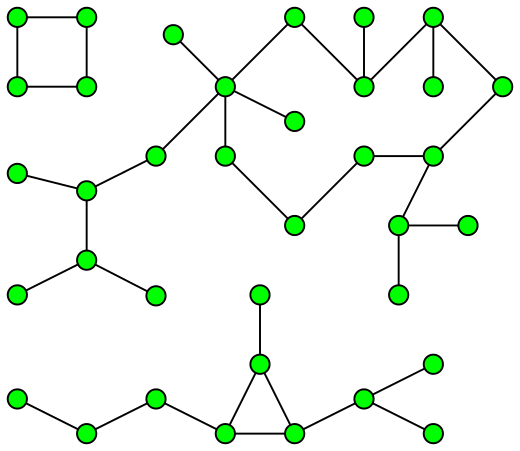 Canonical labellings are hard to find and to handle. This is why one neeeds invariants, so that one can have statements like “all graphs having such and such invariants are so and so”.

23
Complete graph invariants?
1
What graph invariants are fast to compute?
14
What are some useful invariants for distinguishing between random graph models?
7
Graph homomorphisms and line graph
9
On the use of Weisfeiler-Leman refinement in Babai's GI proof
12
Chromatic number of the plane and phase transitions of Potts models
3
Graph isomorphism by invariants
Question feed