The Question in its original form has been answered, but there is a follow-up, see the end of the post.

A border-strip is a skew Young diagram that does not contain a $2 \times 2$-box. A border-strip with $n$ boxes can be encoded as a binary string of length $n-1$ by starting from the lower left corner and writing $0$ for every right step and $1$ for every up step, see the example below. 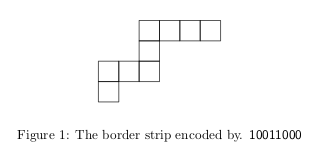 UPDATE: My supervisor was able to prove an even stronger assertion. Suppose that we have a skew diagram $\lambda/\mu$ of size $n$, that is, $|\lambda/\mu|=n$. Then

Here, the height $\textrm{ht}(\lambda/\mu)$ is the number of rows that $\lambda/\mu$ touches minus one. So the height of the border-strip in the Figure is $3$. He used the suggested Proposition 7.19.11 in Richard Stanley's Enumerative Combinatorics Volume 2 and the Murnaghan–Nakayama rule. It is not hard to see that this implies the original Conjecture (note that border-strips given by $\epsilon$ and $\epsilon'$ have the same height). However, I think it would be interesting to know if the equality above could be proved by a more straightforward, combinatorial argument.

What you're talking about are the "$q$-ribbon numbers", and there is a lot known about them. For a good explanation, see Section 2 of "0-Hecke algebra actions on coinvariants and flags" by Jia Huang: https://arxiv.org/abs/1211.3349v2.