Given $k$ girls, they are given $kn$ balls so that each girl has $n$ balls. Balls are coloured with $n$ colours so that there are $k$ balls of each colour. Two girls may exchange the balls (1 ball for 1 ball, so each girl still has $n$ balls), but no ball may participate in more than one exchange. They want to achieve the situation when each girl has balls of all $n$ colours. Is it always possible?

If yes, this implies the positive answer to this question, which I find quite interesting itself.

I think I may prove it when $\min(n,k)\leqslant 3$, but already for $3$ there are many cases to consider.

First off, let me reformulate the problem. I call edges of $G$ black. Let $K_{k,n}$ be the complete graph on the same partite sets $V_1, V_2$, whose edges I will refer to as red. Let $H$ be the superposition (i.e. gluing of identical vertices) of $G$ and $K_{k,n}$. The graph $H$ is a two-colored graph, where each vertex has as many incident black edges as red ones. Hence, $H$ can be decomposed into a collection of alternating cycles (where the color of edges along each cycle alternate between black and red).

Theorem. The graph $H$ has an alternating cycle decomposition into 2- and 4-cycles.

Proof. Let $D$ be an alternating cycle decomposition of $H$ with the maximum number of 4-cycles. We will show that in $D$ there are no cycles of length $>4$. Assume that such a cycle $c$ exists.

Continuing this process we will get an infinite series $(T_k,b_k)$, where the size of $T_k$ grows, which is impossible. The contradiction proves that cycle $c$ does not exist, and thus all cycles in $D$ have length $2$ or $4$. QED

For the algorithmic solution, i.e. reducing the problem to an ordinary matching problem, the following idea helps:

After having put aside the correctly filled boxes the girls need to find a matching from the balls in the buckets to empty boxes that are labeled with such a ball's color.

if a perfect matching exists, then its edges define the pairing for exchanging pairs of misplaced balls that renders each girl with balls of all $n$ colors.

Assume that all balls are in boxes and each girls has put as many balls as possible in a box that is labeled with a ball's color and then puts aside the balls and boxes where the ball's color matches the boxes label.

That leaves every girl with a maximal set of boxes whose labels do not match the color of the contained ball. Now we built a directed graph that is induced by arcs from all balls of color $c$ to all boxes with label $c$.

The solution, provided existence, corresponds then to a collection of vertex disjoint directed cycles that covers all vertices, which in turn correspond to the labeled boxes.

Another reformulation of the problem. Call the matrix $\bigl( \begin{smallmatrix}+1 & -1\\ -1 & +1\end{smallmatrix}\bigr)$ and its negation a tile. Suppose we are given a $k\times n$ matrix $M$ of natural numbers such that the sum in each row is $n$ and the sum in each column is $k$.

I think it is straight-forward to see why this latter version is equivalent to the original question.

One aspect of exhanging the balls a girl initially has with balls from other girls can be interpreted as an assignment problem, namely matching the balls a girl has with the colors (depicted as squares) of the balls she receives; that aspect guarantees, that the girl has balls of all colors after the exchange: 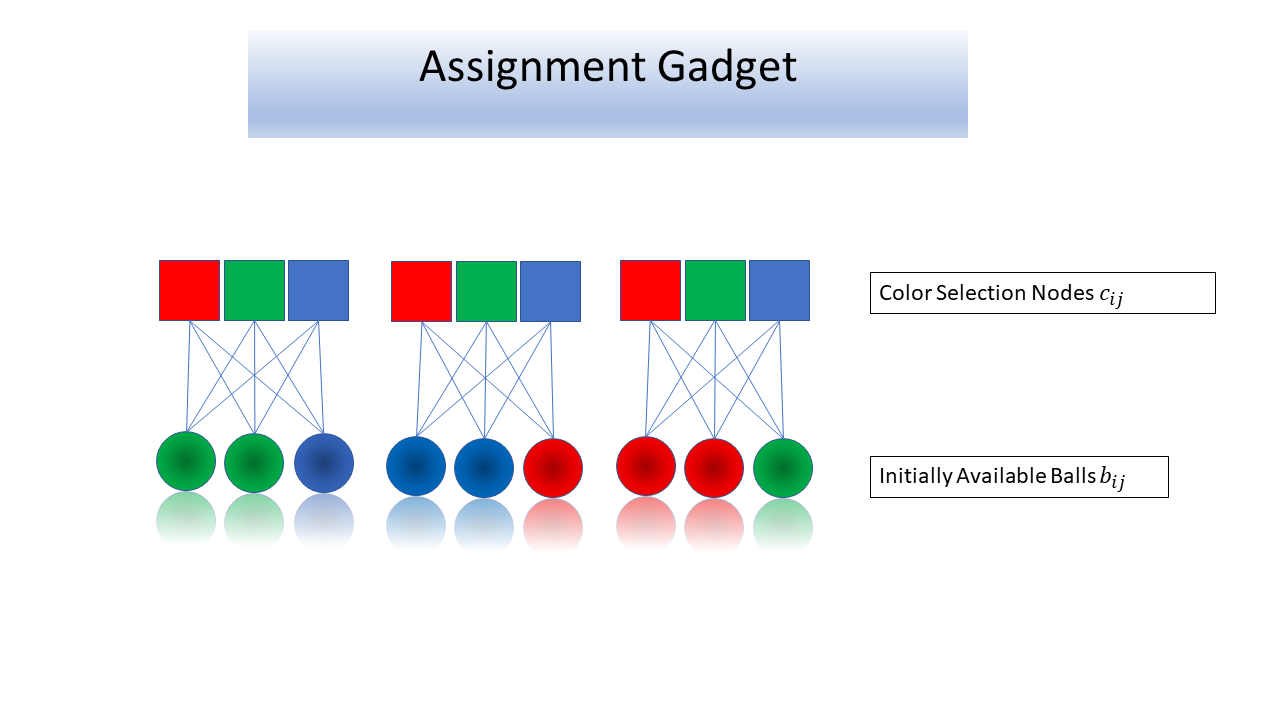 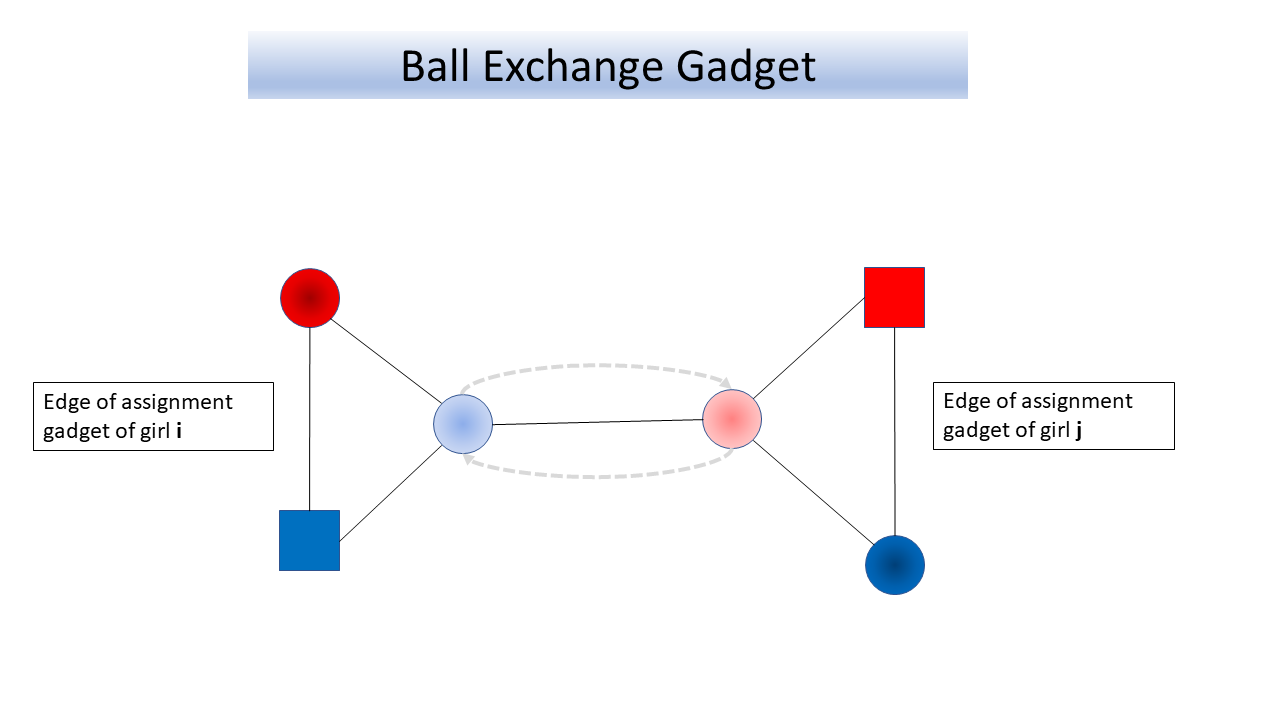 letting girl $i$ initially have balls $b_{ij}$, of which the color can be determined by evaluating by checking $\mathrm{color}(b_{ij})$; letting further $c_{ij}$ denote the color of the ball, against which ball $b_{ik}$ is exchanged.

7
permutations and involutions in binary arrays

2
Colourings of Graphs with extra conditions
7
Perfect matching in a vertex-transitive hypergraph
1
What is the cardinality of the family of unlabelled bipartite graphs on n vertices?
3
Building graphs as unions of disjoint edges
4
Counting the number of $(d_v,d_c)$ regular bipartite graphs
2
Existence of bipartite subgraphs satisfying degree and edge cardinality constraints
1
A combinatorial identity on even spanning subgraphs in the Erdös-Renyi random graph with relations to the Ising model
Question feed