Is this kind of “Gerrymandering” NP-complete?

[I posted this on Math Stack Exchange about two weeks ago, but didn't get any reply, so I'm trying it here.]

Consider the following simplified form of "Gerrymandering": You have $n^2$ squares arranged as an $n\times n$ matrix. Each square is marked with either $0$ or $1$ which means a "voter preference" for one of two parties. The task is to divide the set of squares into $n$ subsets of the same size $n$ such that one of the parties, say $1$, has the majority in more than half of the regions - if that's possible at all. The main geometrical restriction is that each region has to be connected in the sense that two squares are connected if they share a whole edge (and not only a corner). 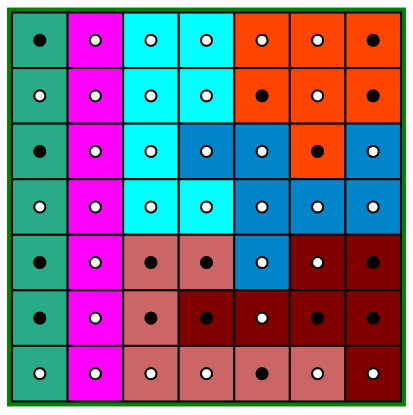 I wrote a backtracking algorithm to solve this problem which essentially tries all possible ways of assigning connected regions. It works, but it of course gets much slower as $n$ increases. I was wondering if this problem (or some variant of it) might be NP-complete. I would think, though, that to be able to find a polynomial-time reduction of a known NP-complete problem to this one, this problem has to be a bit more general. Obviously, there are various ways to generalize it:

I would want to keep the connectedness restriction, though.

I searched the web to find similar problems but wasn't really successful; maybe I didn't use the right words. I found some results about the math of Gerrymandering, but they are about different (and more complicated) problems. I also tried to find known problems that are obviously related to this one, but so far to no avail. So my questions are:

Yes, this problem is NP-hard. Before we start, notice that it doesn't matter that we want a majority, instead the desired number of districts could be a part of the input. This is because somewhere neatly separated from the rest of the square/rectangle we could place many voters for ourselves with which we can claim any fixed amount of districts. Therefore, the problem I study also has a parameter $k$ which denotes the districts we need to win.

I will sketch a reduction from Planar Monotone 3-Sat problem, which was shown NP-complete in M. de Berg and A. Khosravi: Optimal binary space partitions for segments in the plane. Here the goal is to decide the satisfiability of a conjunctive normal form (CNF), where each clause contains at most 3 literals, all of which are either negated, or all unnegated, along with a planar embedding of the incidence structure in the following way:

• Each variable corresponds to an interval node in the horizontal line $y=0$; these intervals are pairwise disjoint.

• Each clause corresponds to an axis-parallel rectangle node; these rectangles are pairwise disjoint.

• If a clause contains only negated (resp. unnegated) variables, then its rectangle is entirely contained in the $y < 0$ (resp. $y > 0$) halfplane.

To reduce one such instance, we will have to realize the embedding of the underlying graph. This is achieved as follows: For each node (variable or clause), we put about $n/2$ voters in its vicinity. The edges are drawn to be far enough from each other so as they don't interfere. An edge of length $L$ is divided into $L/n$ parts and $n/2$ voters alternate with $n/2$ non-voters. This will allow us to reach one node from another in an edge. Note that we can put each $n/2$ voters of the edge in a district each, so these won't influence the number of districts. Instead, we set the parameter $k$ such that we win if we can also include each $n/2$ voter group of the variable and clause nodes in a winning district.

This is the end of the sketch. Below is a very simple example of how this voter-grabbing is realized. Note that this is 1-dim instead of 2-dim. District boundaries are denoted by | while the (imaginary) node and edge boundaries are denoted by a comma. In this example the variable x was set to, say false (it went towards left), so the voter from its right could be grabbed by a clause.

variable x up to, edge can be this long, clause with x

Note that we didn't check many details, like whether we can ensure that all districts without a voter can have area exactly $n$ etc, but these should not pose a great issue, and the length of this answer is already significantly above a usual Mathoverflow post...

This is somewhat complementary to domotorp's existing answer, explaining the first paragraph in more detail. 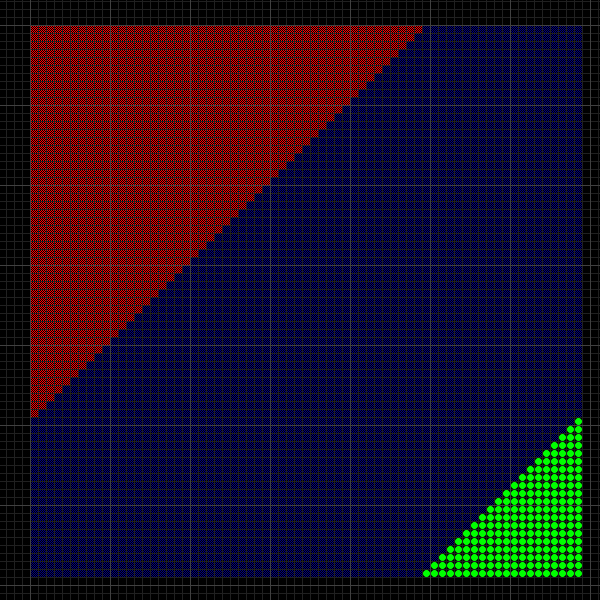 We'll put the 'interesting' part of the problem entirely in the green lower-right triangle, and just use the upper-left triangle for storing extraneous A-squares.

Consequently, it suffices to show that we can embed our favourite NP-complete problem as an instance of the following problem: 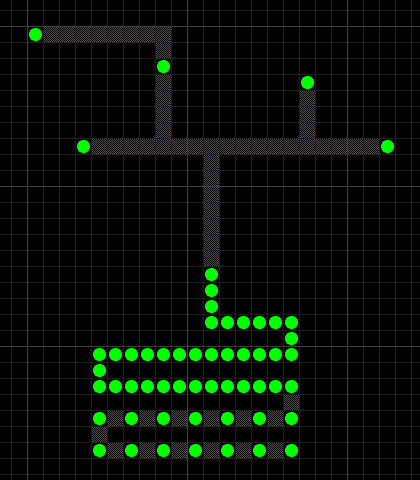 We attach the chicane at the bottom to the lowermost point, solely with the purpose of ensuring that there are $m$ A-squares (shown in green) which need to be engulfed in a polyomino using at most $m - 1$ B-squares (shown in red). The chicane packs the desired number of A-squares into a region with side-length $O(\sqrt{m})$, sufficient to ensure that the problem comfortably fits into an $a \times b$ rectangle with $2(a + b) \leq m$.

Not the answer you're looking for? Browse other questions tagged reference-request algorithms computational-complexity recreational-mathematics np or ask your own question.

8
Is this problem solvable in polynomial time?
17
Is #k-XORSAT #P-complete?
7
Is pattern recognition NP-complete?
23
What is the complexity of this problem?
5
Periodic sequences in symbolic dynamics
6
Is there an efficient algorithm to check whether a matrix is symmetrizable using only permutation matrix?
8
Is this problem on weighted bipartite graph solvable in polynomial time or it is NP-Complete
2
Minimal Support Solutions of a Linear System (Dissertation)
4
What arguments do exist against defining completeness in NP using injective Karp reductions?
Question feed