I would like to know if the fundamental group of the connected component of a knot space could be non commutative. I am specially interested in the case of $\mathbb{R}^3$, $\mathbb{S^3}$ or some other $3$-fold. All the examples I know result to be commutative (torus knots in $\mathbb{S}^3$, the space of unknots…) but I don't find an argument to prove (or disprove) this in general. I am also curious to know (if the previous question was maybe too hard) if this known at least for the space of long knots.

There is a fairly clean statement about which components of the "long knot space" have abelian fundamental group.

This is what I call the "long knot space".

So you can work out the answer in this case, as well, although it will require a bit more leg-work.

As you've noticed, for the unknot, torus knots, and cables of torus knots, the fundamental groups are abelian. In general, the fundamental group of any component of $K_{3,1}$ has a finite-index subgroup that's a product of pure braid groups. So step one: how do you avoid non-abelian braid groups? Answer: in the satellite decomposition, at no stage can you have a connect sum of three or more knots.

Okay, but if you limit yourself to such "restricted satellites", how do you stay with abelian groups?

As has been noted, the fundamental group of hyperbolic knot components is abelian (free rank 2) in $K_{3,1}$.

But you get some interesting things if you take, for example, the Whitehead double of an invertible knot, like a torus knot. That component has the fundamental group of the Klein bottle cross a circle. A very nice non-abelian group.

If you take a hyperbolic satellite operation with $n$ input knots, the fundamental group of that component has the form

Where $A$ is a homomorphism from $\mathbb Z$ to a fairly simple automorphism group of the product $A_1 \times \cdots A_n$. The groups $A_1, \cdots , A_n$ are the fundamental groups of the components of the satellite (input) knots in the satellite operation.

So if the input groups $A_1, \cdots, A_n$ were all abelian to begin with, you would get a non-abelian semi-direct product if and only if the homomorphism $A$ acts non-trivially on the product.

This happens if and only if the "pattern link" has a symmetry group that is incompatible with the symmetries of the satellite knots. Rather than write it out as a formula, let me give some examples.

Example 2: Whitehead double of a non-invertible knot, the homomorphism A is trivial.

Example 3: The thing I call the "Borromean satellite operation" 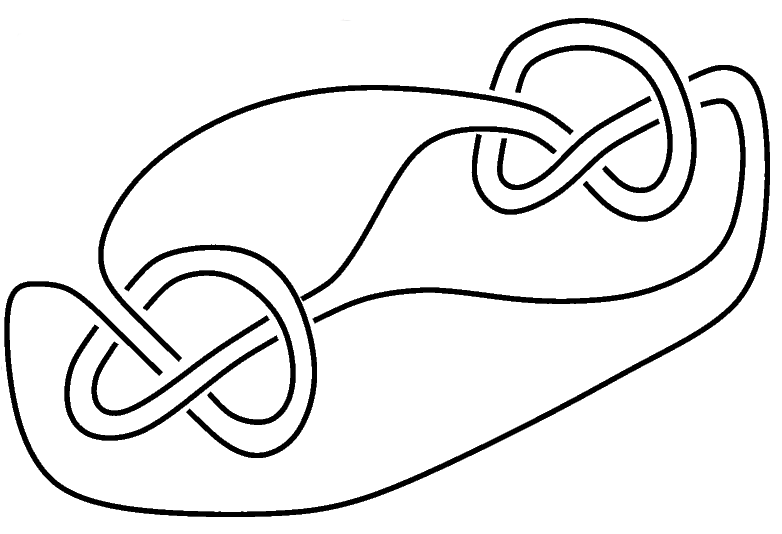 In this picture the borromean rings are the "pattern". The two trefoils are the satellite knots.

In the pictured case, the homomorphism factors through a faithful rep $\mathbb Z_4 \to Aut(A_1 \times A_2)$. Both $A_1$ and $A_2$ are $\mathbb Z$. The automorphism in this case would rotate the rank-2 lattice $\mathbb Z^2$ by $\pi/2$. If the satellites were distinct invertible knots (say a trefoil and a figure-8) then the homomorphism would factor $\mathbb Z_2 \to Aut(A_1 \times A_2)$ and it would act by inversion on the individual factors, i.e. it would not interchange them. [Technically I think I need to modify that image slightly, this is what might be called a "twisted" Borromean satellite operation, and I should change that to the un-twisted version]

My paper called "An operad for splicing" covers these kinds of issues in the most detail.

So a recursive "closed form" answer is that you get an abelian group if and only if: (1) when you do a hyperbolic satellite operation it must have "restricted symmetries" where the satellite knots themselves have abelian groups (in the sense of spaces of knots -- perhaps I should say "motion group"). And (2) you are never allowed to take a connect-sum of three knots. And (3) if you take a connect-sum of two prime knots, they must be distinct and those prime summands must have abelian motion groups.

This is the quick answer. If you're comfortable with the language in the splicing operad paper I can be more specific. And of course, the start of the induction operation for the above "closed form" is that torus knots and hyperbolic knots have abelian motion groups. I failed to mention cabling operations -- on the level of the fundamental group that is cartesian product with $\mathbb Z$, so it preserves abelian-ness.

Yes, the fundamental group may be nonabelian.

For the purpose of this question, we may largely move freely between the spaces of long knots and knots in $S^3$:

1
Space of all topological knots (tame and wild)
8
Are there any very hard unlinks?
9
Torus knots in Euclidean space -- a symmetry argument
3
First cohomology of the space of long knots in ℝ⁴
5
Euclidean symmetries of torus links in R^3
53
How to add essentially new knots to the universe?
7
Fundamental group of the space of smooth embeddings of $S^1$ into $\mathbb R^3$
2
0-framed smoothly slice knot that can be obtained by blowing down successively a link of unknots
Question feed