Due to some needs, I have to compute all the eigenvalues of A.

(Note: I don't care about eigenvectors)

And by some manipulation that is omitted here), I finally found that, the eigenvalue of A can be calculated based on a intermediate results of its sub-matrix: J.

However, one of my colleagues challenged me , said: "For large systems, a dense matrix, even if smaller than the actual state matrix, can lead to numerical problems. It is preferable a larger but sparse matrix. "

Well, I have doubt on his comments/critics on my special case.

Yes, it is true that matrix A is "relatively" sparse, but the sparse pattern is not as usual as we often see in a symmetric, sparse matrix. Note that, here , both A and J are non-symmetric. (Most literature/books discuss sparse algorithm mainly towards symmetric matrix.)

Also, I search on Google for some literature, and find that, for symmetric, sparse , matrix, there exist some specially designed methods (sometimes towards special cases though, e.g. for tri-diagonal cases) which can obviously beat symmetric, dense/non-sparse matrix). However, I don't see any literature exactly/explicitly support my colleague's comment for general case,i.e., non-symmetric, dense matrix.

The sparse pattern of A matrix is shown as follows: 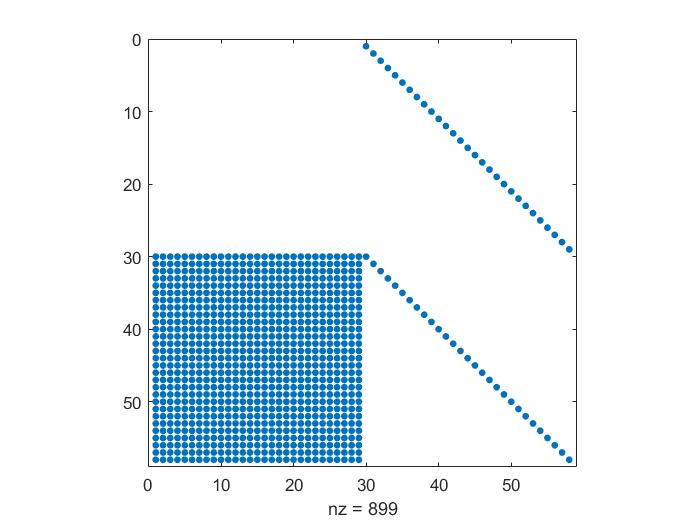 The remark of your coworker is only valid if you significantly increase the number of non-0 entries in your halved matrix.

I presume you used a form of Schur complement trick to halve the size.

And if you wrote it down one would have seen that the number of non-0 in the result only went down. Thus, it could only make it faster to compute eigenvalues.

If you take the transpose of the matrix, which has the same eigenvalues, and you divide by $w_0$, you get the (block) companion matrix of a quadratic matrix polynomial with $n \times n$ coefficients. Using an algorithm designed for such problems may save time.

Not the answer you're looking for? Browse other questions tagged algorithms computational-complexity eigenvalues matrix-theory numerical-linear-algebra or ask your own question.