is this a modular form of some kind?

I suspect that the function

may be some kind of modular form. It looks like a weighted theta function, but is not exactly an harmonic theta series.

Plotting this function in the complex unit disc suggests a modular behaviour. There is a real zero around $-0.3$, and other zeros inside the disc.

The formula above has an hidden symmetry, because summation over all negative integers would give the opposite function.

Does it appear in the literature ?

I am also interested in the expansion around $q=1$, where there is a pole. But this would be another question.

The answer below by Somos is interesting, but it only tells us that another resembling series (with alternating signs) is a modular form. It is not possible to pass from this modular form to $F(q)$ by just changing $q$ to $-q$.

Trying to follow the suggested track of Eichler integrals for modular forms of half-integer weights and quantum modular forms, one auxiliary question is now whether the following is a modular form:

Here the sum can also be taken over $\mathbb{Z}$, so this is rather similar to a theta function...

EDIT: ... and in fact is equal to the difference

EDIT: Here is a picture 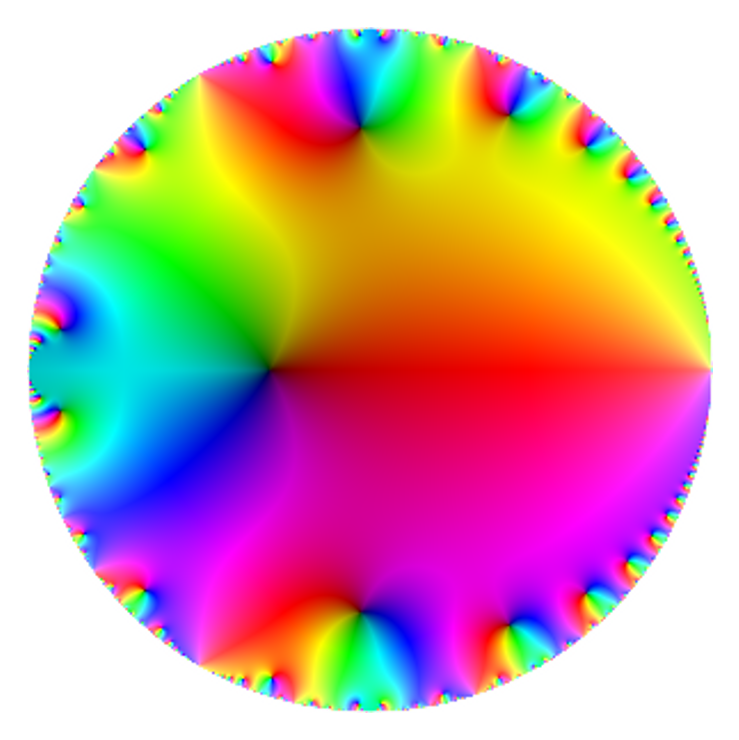 The OEIS sequence A198954 has your q-series as its generating function. It is noted in the entry that

The reference this comes from is listed as

Not an answer, just a long comment. I had often wondered whether the superficially similar series

has any modular properties. My motivation was that the formal "Borcherds transform" (excuse the vulgarity) of this series, up to a power of $q$, would be the MacMahon function

in the same way as the Borcherds transform of the standard $\theta$-function is the Dedekind $\eta$-function (essentially just delete the linear $n$ in both formulas above).

On the other hand, the MacMahon function is claimed to have some kind of exotic modularity properties in an old physics paper of Cardy (Operator content and modular properties of higher dimensional conformal field theories, Nucl. Phys B366). Unfortunately I could never make head or tail of the discussion there.

15
Is there an approach to understanding solution counts to quadratic forms that doesn't involve modular forms?
3
Modular form with pole of infinite order
6
Twisted modular forms of half-integral weight
26
Is there a "Langlands philosophy" reason for the fact that the L-function of the Jacobi theta function is (almost) the Riemann zeta function?
3
Index one weak Jacobi forms and weakly holomorphic modular forms?
Question feed