Reidemeister showed that just three basic moves (which manipulated crossings) were needed to test whether two knots were equivalent or "ambient isotopic." Suppose we expand the class of topological objects to permit self-intersection, as here: 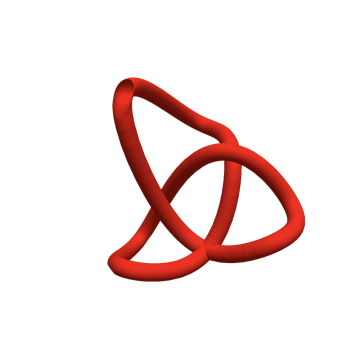 The notion of ambient isotopy applies to such objects. What is the smallest class of moves that guarantees one can transform such an object into any other ambient isotopic object?

I suspect the Reidemeister moves need be augmented by fairly trivial moves passing segments above or beneath the intersected crossing, but how would one prove that?

These objects are called spatial graphs. A set of Reidemeister moves for them was found by Kauffman; see

Not the answer you're looking for? Browse other questions tagged knot-theory or ask your own question.