What about $\tau_g ?$ Is there any theorem corresponding to curvature dealing with torsions as well? Like in normal plane ( since $ \dfrac{dB}{ds}= -\tau_g N ):$

And what about the product of extreme $\tau_g's ? $ Does a corresponding scalar $ "T " $ also remain constant in isometry?

The question is about conditions for existence of an isometric twisting invariant $"T"$ gleaned from this geometrical analogue just as Gauss curvature $K$ is a bending invariant.

The statement needs to be improved to remove vagueness of expressing torsion. I request your help to refine the question and point to an answer to the extent it makes sense in this context. And please suggest references also.

I have tried to represent ( a rough sketch.. shall improve it) the two parameters in bipolar coordinates together. Motivation for bipolar plot representation of curvature/torsion tensor view is.. to work on a prospect to build premises that if $K$ invariance is true then $T$ invariance must consequently be also true...and a twist invariant $T$ that rank with $K$ would be found/identified.

I mean we should be able to formulate for a surface of revolution of constant torsion product T.

T=K in magnitude as geometric mean of segment lengths as shown in rough sketch.. but its definition is drastically different. Can we have a formulation (and views if possible) of any example of a surface of constant P with parametrization obtained by integration of an ODE with arbitrary constants in two or three twisted stages where individual principal geodesic torsions multiply to same product P? The answer to such question for constant K is well known.

I wonder if topic of Spinor Bundles is relavant here. 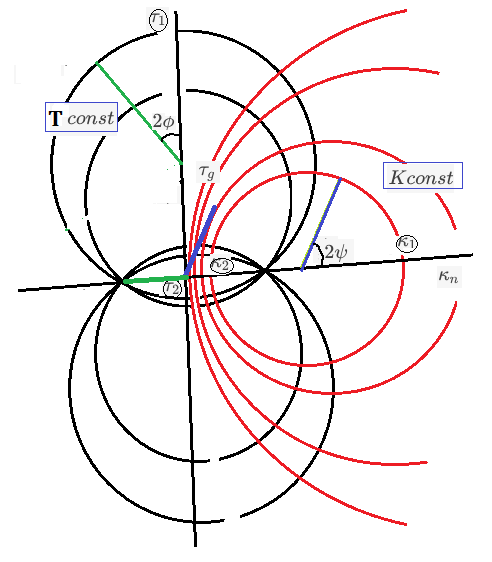 Any nonconstant scalar invariant $T$ depending on the values of $\tau_g$ in the various directions at a point is not invariant under isometry. Compute that $\tau_g=(k_1-k_2)\sin \psi \cos \psi$, so maxima and minima are from directions perpendicular to the principal directions. If nonconstant as a function of $k_1,k_2$, any invariant $T=T(k_1,k_2)$ will determine (along with the isometry invariant Gauss curvature) the squared mean curvature, as these are the elementary symmetric functions of $k_1,k_2$ (up to constant multiples). But the squared mean curvature is not isometry invariant. In fact, because all real analytic metrics on surface are locally embeddable isometrically in Euclidean 3-space, any isometry invariants can only depend on the intrinsic geometry. If an invariant is rational in highest derivatives it is expressible (by a theorem of Weyl, I think) in the Gauss curvature and its covariant derivatives. I don't know a good reference, though, so I hope someone will help with that. Anyway, we aren't missing any invariants in surface theory.

Not the answer you're looking for? Browse other questions tagged dg.differential-geometry or ask your own question.