A problem of four conics

I found a remarkable theorem of four conics as follows some years ago. But it has no proof; I am looking for a proof:

Theorem: Take three conics. Suppose that each of them touch a fourth conic at two points. Then remaining pair of common tangents intersect at three collinear points. 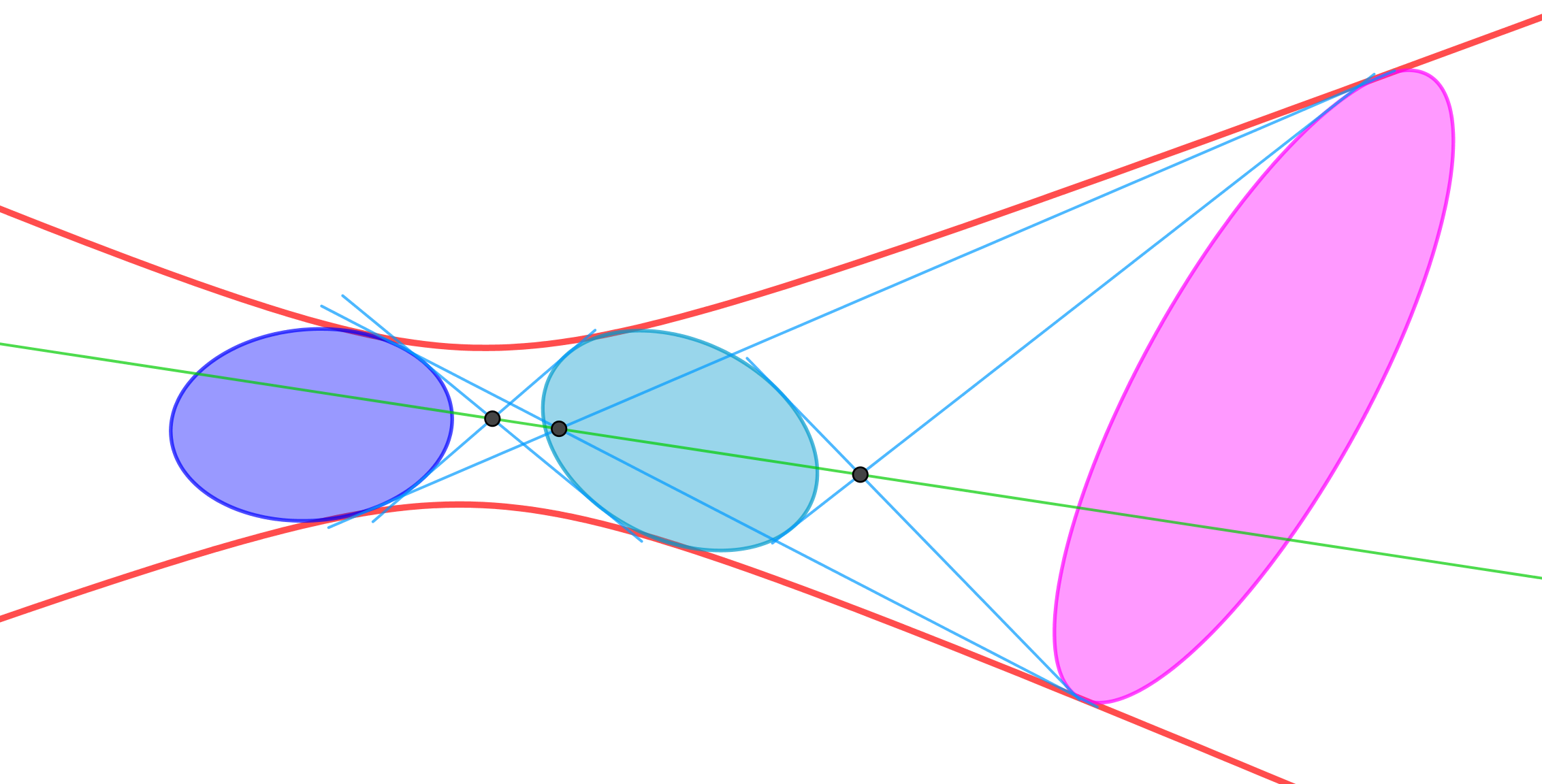 This is a consequence of the Double Contact Theorem.

The dual theorems are stated as follows. If three conics are such that, taken by pairs, they have couples of common tangents intersecting at three distinct points on a line (that is not itself a tangent to any of the conics), then (a) the conics have this property in four different ways, and (b) the conics all have double contact with a fourth. And, conversely, if three conics each have double contact with a fourth, then certain of their common tangents intersect by pairs at the vertices of a complete quadrilateral (Evelyn et al. 1974, p. 22).

Your observation is the last sentence of the quote above. This is all proven in The Seven Circles Theorem and Other New Theorems by Evelyn et al. The proof is a couple of pages which I won't reproduce here, manipulating equations of lines and conics and their pencils to get the desired result. A hardcore synthetic proof would have been more satisfying, but equation chasing may be more efficient.

The six tangents form a hexagon, so the tangent intersections are on a Pascal line, and the vertices of the hexagon would lie on their own conic.

Update: The theorem goes back to at least 1863, because it can be found in Salmon, Conic Sections, Art. 306, pg 267: "Or, three conics, having each double contact with a fourth, may be considered as having four axes of similitude. (See Art. 117, of which this theorem is an extension.)"

Not the answer you're looking for? Browse other questions tagged mg.metric-geometry projective-geometry plane-geometry curves conic-sections or ask your own question.

4
A new theorem in projective geometry
9
A chain of six circles associated with a conic
8
Three homothetic centers are collinear
3
When do two lines and three points determine exactly two conics? Exactly four?
1
Midpoints of three segments are collinear associated with the Pappus configuration
2
Yiu's equilateral triangle-triplet points
4
Is it a new method to construction of a conic, how can prove?
10
Geometric construction of the fourth intersection points of two conics
14
Is it a new discovery on conic section?
1
Thirteen-point conic and four-point line, are they new?
Question feed