Since I can't explicitly compute the intersection points, I'm wondering if there is a way to express the same 2D orient calculation in 3D using only the original points. If there are 3 edges striking the triangle that gives me 9 points in total to play with. Assuming what I'm asking is even possible (using only the 3D orient tests), then I'm guessing that I'll need to form some subset of all the possible tetrahedra between those 9 points. I'm having difficultly even visualizing this, let alone distilling it into a formula or code. I can't even google this because I don't know what the industry standard terminology might be for this type of problem.

One thing that occurs to me: Perhaps if I could fit non-overlapping tetrahedra between the 3 line segments, then the orientation of any one of those that crossed the plane would be the answer I'm looking for. Other than when the edges enclose a simple triangular prism, I'm not sure if this sub-problem is solvable either.

Any ideas how to proceed with this?

I am answering this on both MO & SO, expanding the comments I made on MO.

My sense is that no computational trick with signed tetrahedra volumes will avoid the precision issues that are your main concern. This is because, if you have tightly twisted segments, the orientation of the triangle depends on the precise positioning of the cutting plane. 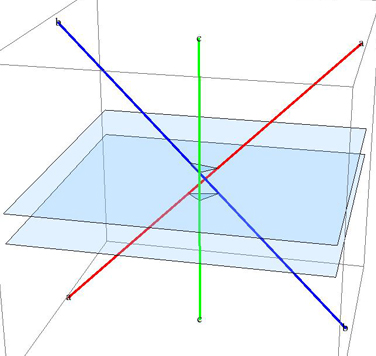 In the above example, the upper plane crosses the segments in the order (a,b,c) [ccw from above]: (red,blue,green), while the lower plane crosses in the reverse order (c,b,a): (green,blue,red). The height of the cutting plane could be determined by your last bit of precision.

Consequently, I think it makes sense to just go ahead and compute the points of intersection in the cutting plane, using enough precision to make the computation exact. If your segment endpoints coordinates and plane coefficients have $L$ bits of precision, then there is just a small constant-factor increase needed. Although I am not certain of precisely what that factor is, it is small--perhaps 4. You will not need e.g., $L^2$ bits, because the computation is solving linear equations. So there will not be an explosion in the precision required to compute this exactly.

have you tried Chapter 5 of Real Time Collision Detection by Christer Ericson?

Not the answer you're looking for? Browse other questions tagged mg.metric-geometry computational-geometry simplicial-volume or ask your own question.

4
How can I efficiently determine which side of a line segment is internal to the polygon?
43
two tetrahedra in R^4
3
Find longest segment through centroid of 2D convex polygon?
4
Intersection of Polyhedra
1
Sampling uniformly from all possible line segments of a given length that fit inside a container
5
Ascertain properties of a new kind of rectilinear-convex set
1
Number of distinct points in an n-dimensional tetrahedron
2
Intersection of sphere with triangle containing moving vertices
5
On two centers of convex regions
Question feed