How to visualize the Microsupport of a Sheaf?

I am looking through Persistent homology and microlocal sheaf theory to learn a bit on barcodes. They are require the notion of a microsupport of a sheaf, looks like it could be a rather concrete geometric object. In order to study this particular notion of "barcode" they require microlocal sheaves and derived categories.

The reference book of Kashiwara-Shapira Sheaves on Manifolds has a through general discussion, but now it's hard to extract only the relevant parts to this one application. As for the barcodes paper they say

(p. 2) The main goal of this paper is to describe constructible $\gamma$-sheaves on $\mathbb{V}$

Before we do any of that, we try to understand the notion of microsupport for a sheaf.

And I think we need slightly more, the notion of a $\gamma$-sheaf:

So it seems in order to learn this particular theory of barcodes, we need to understand microlocal sheaves a bit better (and I do not). However, there is also other points of view:

I'd been hoping for months that someone would come along and answer this question: every time I encounter the definition of microsupport, my brain responds with a flash of anger followed by a protracted period of profound sadness. I hope that someone with a deeper understanding of this material will eventually descend from the heavens and show us a better way than the following.

Start with simplifying everything until it starts to look ridiculous. $\mathscr{F}$ is not a complex of sheaves in the derived category, but rather a single sheaf (which, if you are addicted to complexes, you can think of as being concentrated in degree zero). And rather than taking values in the category of $R$-modules for a hideous ring $R$, let's just assume we are dealing with vector spaces over a nice field ($\mathbb{Q,R,C} \ldots)$. I'll assume that you can "visualize" things like the cohomology $H^\bullet(U;\mathscr{F})$ for open sets $U \subset X$ --- this is already difficult unless you are used to thinking of sheaves in terms of their leaf spaces.

What we know for certain is that the microsupport $\text{SS}(\mathscr{F})$ lives inside the cotangent bundle $T^*X$. If you'll allow me the usual conflation of a vector space with its dual (through an inner product structure), then we can try to visualize microsupports in the tangent bundle. This contains all pairs $(x,v)$ where $x$ is a point of $X$ while $v$ lies in the tangent plane $T_xX$. If you flatten everything out by passing to a local chart around $x$, the picture is something like this: 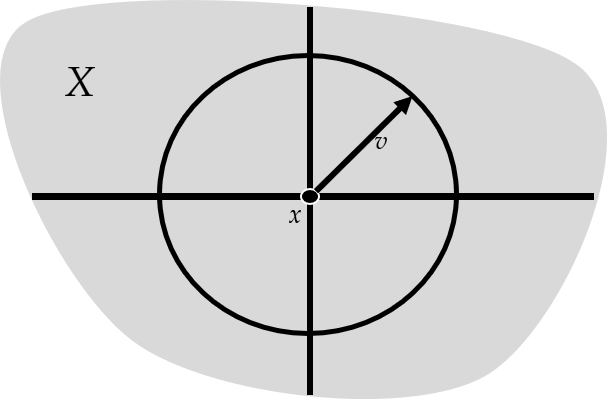 The important point is that $v$ describes a half-space in the usual manner, consisting of all vectors in $T_xX$ whose inner product with $v$ is non-negative; and intersections of open sets $U$ around $x$ with this half-space will determine whether or not our pair $(x,v)$ lies in the microsupport $\text{SS}(\mathscr{F})$. Here is a picture: 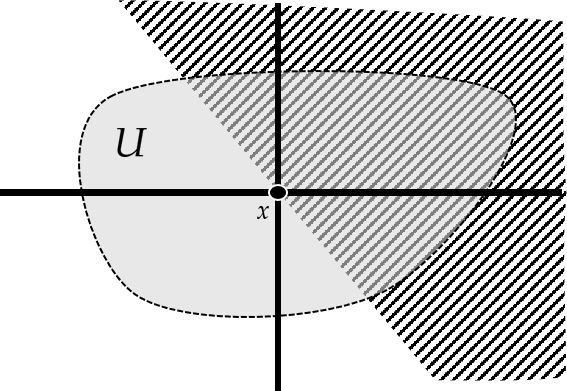 Writing $U_v$ for the intersection of $U$ with the interior of our half-space, the cohomology group of interest is $H^\bullet_c(U_v;\mathscr{F})$, where the subscript $c$ indicates compact support. One then takes a limit over decreasing $U$. If this limiting cohomology group is zero, then the "directional derivative" of the sheaf $\mathscr{F}$ along $v$ is trivial, meaning that the sheaf propagates infinitesimally without loss of information along $v$. In this case, $(x,v)$ is not in the microsupport. But if that limiting cohomology group is not zero, then there is a phase transition in the overlaid algebraic data, in which case $(x,v)$ lies in $\text{SS}(\mathscr{F})$.

This might be too late, or out-of-date for you, but I've always understood the microsupport best in terms of Morse theory (or microlocal Morse theory, or the stratified Morse theory of Goresky-MacPherson).

Microlocally speaking, we'd say (in the first case, with no critical points) that $SS(Rf_*\mathbb{Z}_M^\bullet)$ is just the zero section (away from the endpoints), not saying anything there.

It isn't really incorrect to think of the microsupport of a general complex $F^\bullet \in D^b(\mathbb{Z}_M)$ in this way, as a subset of the cotangent bundle that sees "generalized critical points of functions with coefficients in $F^\bullet$". In fact, in the complex-constructible setting, this is an equivalent way of thinking about the microsupport:

Theorem (somewhere near the end of section 8.6 of "Sheaves on Manifolds"):

where $\phi_f$ is the vanishing cycles functor along $f$.

This is also perhaps the best way to understand Kashiwara-Schapira's "local type" construction for a complex $F^\bullet \in D_{\mathbb{C}-c}^b(\mathbb{Z}_M)$, where purity of local type is equivalent to (middle) perversity.

Not the answer you're looking for? Browse other questions tagged ct.category-theory homological-algebra sheaf-theory derived-categories micro-local-analysis or ask your own question.

2
For an l-adic sheaf (F_n), why is the complex F_n of finite Tor dimension?
4
Calculate $Hom$ in derived category
14
How much of a variety can be reconstructed from codimension-zero data?
6
On the ordered set of real numbers, does sheaf+cosheaf imply constant?
5
Is the sheaf associated to a differential structure of a specific type?
2
Sheaf / de Rham cohomology of a stack with values in a complex of abelian sheaves
6
How to understand the Fourier-Sato transform and microlocalization functors?
Question feed