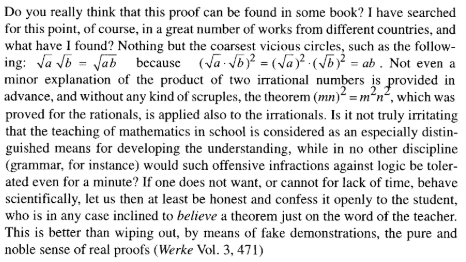 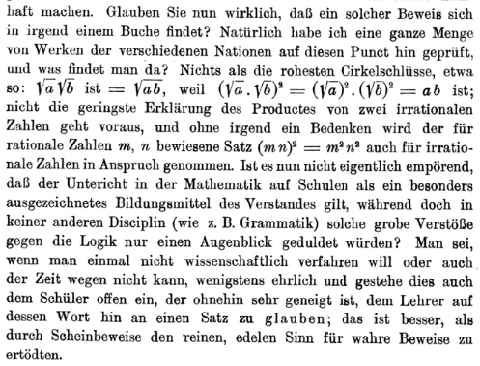 Why did Dedekind doubt that $(\sqrt{a}\cdot\sqrt{b})^2=(\sqrt{a})^2\cdot(\sqrt{b})^2$ had been proved (which lies at the heart of his vicious circle)? What's wrong with this identity which easily follows from the associativity and commutativity of multiplication:

He argues that rational and irrational numbers are of a different kind, and thus $(m\cdot n)^2 = m^2\cdot n^2$ (which had been proved for the rationals) may not be "applied without scruples" to the irrationals.

But why – from his point of view – had $(m\cdot n)^2 = m^2\cdot n^2$ been proved only for the rationals? Couldn't it – for example – have been proved already in the system of Euclid's Elements by elementary geometrical considerations, regardless of rational or irrational, i.e. for arbitrary lengths: 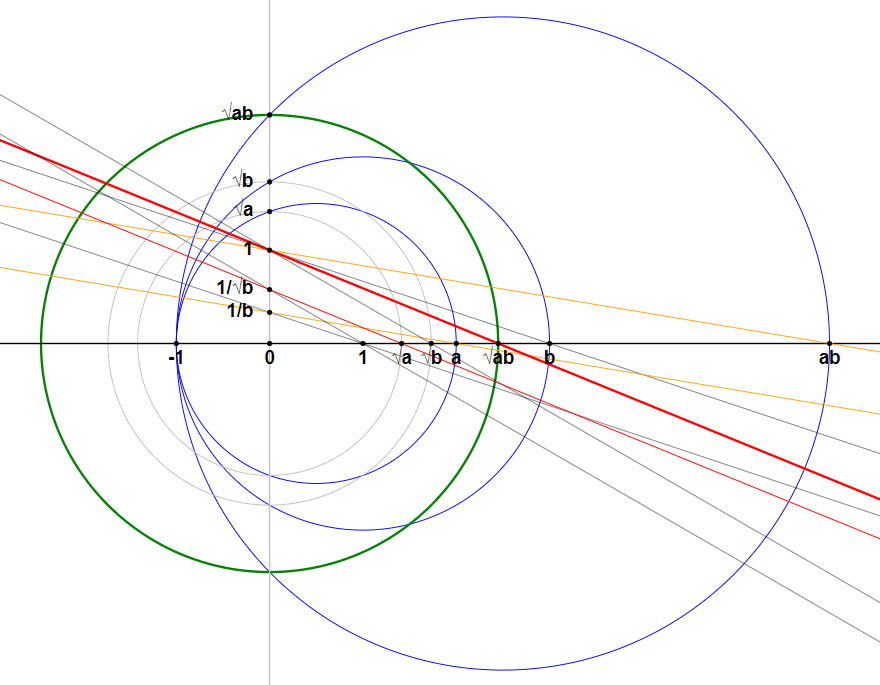 The proof that the fat green circle intersects the horizontal line at the same point as the fat red line (which is constructed as the parallel to the thin red line going through 1) may have been complicated for Euclid, but it seems possible.

If not so: Why couldn't it have been proved by Euclid?

And finally: What was Dedekind's alternative proof, eventually?

I don't think Dedekind's complaint can be that a proof in an axiomatic system must be invalid if the objects in the system have not been constructed from simpler objects. This obviously leads to an infinite regress. Today we typically take "set" to be undefined, but Dedekind would surely have been familiar with treatments of Euclidean geometry in which "point" is an undefined term.

I suspect that Dedekind was complaining that people were not working in a full axiomatic system for the reals, but rather were using only the elementary axioms and did not realize that the completeness axiom was needed. Note that in the quote, the argument he criticizes uses only elementary properties such as commutativity and associativity.

Without completeness, we don't have any way of proving the existence of square roots, but the textbook treatments he complains about presumably don't admit that the theorem $\sqrt{2}\sqrt{3}=\sqrt{6}$ is conditional on the unproved existence of these roots.

Why couldn't it have been proved by Euclid?

Dedekind point was that nobody before him has defined reals, their roots and their multiplication; hence (before him) there was no proof.