In preparation for a talk I am giving to our undergraduate mathematics society, I am trying to collect examples of combinatorial constructions that were found by computer. Thus my question is the following.

What are the most notable examples of combinatorial constructions found by computer search?

Another non-example would be Aubrey de Grey's construction of a unit-distance graph on 1581 vertices with chromatic number 5 (thereby showing that the chromatic number of the plane is at least 5), since the graph was constructed by hand.

I don't know how notable this would be but here is another example from my paper "16,051 formulas for Ottaviani's invariant of cubic threefolds" with Christian Ikenmeyer and Gordon Royle, published in J. Algebra 2016. It is this graph: 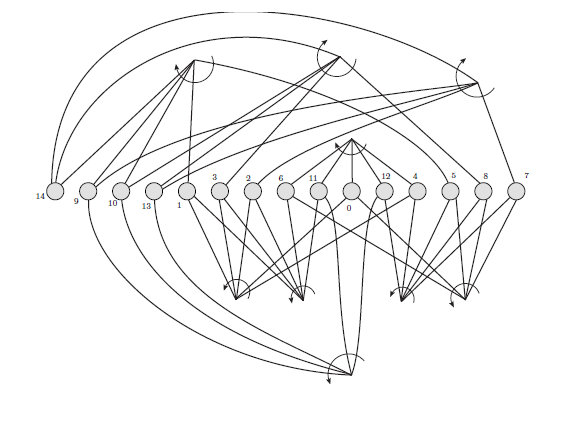 It represents the $SL_5$-invariant of degree 15 of cubics in 5 variables. It was found by a computer search of $1-(15,5,3)$ design with certain desired chromatic properties.

There is a beautiful story involving the faithfulness question of the Burau representation of the braid group.

Moody showed that the Burau representation is unfaithful if $n$ (the number of strands) is at least 10. The method involved a beautiful reduction to an existence question for a simple closed curve, with certain unusual intersecton properties. Long and Patton improved this to $n \ge 6$ by finding more curves.

Bigelow did extensive computer calculations and found such an exceptional curve for $n=5$, thus showing unfaithfulness for this $n$. He also found a ridiculously simple example for $n = 6$:

there are results in graph theory of this sort, essentially enumerating all the graphs on at most N vertices with such and such properties, and seeing that there are none/some.

the most famous computer-based result in graph theory is probably 4-color theorem https://en.m.wikipedia.org/wiki/Four_color_theorem

similarly, in finite group theory (which is quite combinatorial subject in a way) one might look in a complete database and reach some conclusion...

I would suggest browsing through the issues of Experimental Mathematics, which has many examples of the kind you seek. (Full disclosure: I am an editor, so you may construe this as tooting my own horn).

Not sure whether this counts as combinatorial: there are several equations for generating functions that were found by computer. I think Bostan, Alin; Kauers, Manuel; Van Hoeij, Mark, The complete generating function for Gessel walks is algebraic, Proc. Am. Math. Soc. 138, No. 9, 3063-3078 (2010). ZBL1206.05013. and its predecessor

Personally, I am very fond of Exact formulas for the partition function?

My group, The Permuta Triangle, has been working on automating the discovery of combinatorial specifications. Some of the discovered results for pattern avoiding permutations, set partitions and (soon) Motzkin paths can be viewed at the ComboPal website. Click "Random" in the left hand corner to go on a tour of specifications!

Many coverings in La Jolla Covering Repository were found by computer.

was essentially found by computer.

35
Cliques, Paley graphs and quadratic residues
142
Important formulas in combinatorics
13
Cops, Robbers and Cardinals: The Infinite Manhunt
63
How to be rigorous about combinatorial algorithms?
5
Updated bounds or references for an old Erdős problem –– coloring the plane with multiple forbidden distances?
24
The verbs in combinatorics: Enumerating, counting, listing and all that
33
Examples of errors in computational combinatorics results
Question feed