Can we count the number of integer lattice points in this case?

Suppose that we have a $d−$dimensional ball around the origin, we want to count the number of integer lattice points that lie within a distance $r$ from the origin where these points should have distances only in no more than $(d/2)$ coordinates and it's distance on the rest of coordinates must equal $0$. i.e if $d=4$ and $r=3$ then what is the number of integer lattice points lie within the ball s.t these points lie in a number of coordinates $≤2$.

I asked this question previously here but I didn't receive an answer!

Thanks for any help, hint or a reference.

An exact formula can be given for what you seek in terms of the functions giving point counts for balls. However, those functions are only known to approximate accuracy. The accuracy is good, but there are significant oscillations.

Let $\mathcal{B}_n(r) \subset \mathbb{R}^n$ be the closed ball of radius $r$ centered at the origin.

Consider these functions of $r$:

Then we have these relations (given below) between the functions. However, for $n \gt 1,$ this gives the the values only approximately.

It is nicest to let $r$ be a real variable. Then it is easily explained that $B_n(r)$ is fairly close to the volume $\mathcal{B}_n(r)$. However this volume is a smooth increasing function while $B_n(r)$ is piece-wise continuous with jumps only at $r=\sqrt{k}$ for integers $k$ expressible as the sum of $n$ squares. (This is all integers once $n \geq 4$ ). 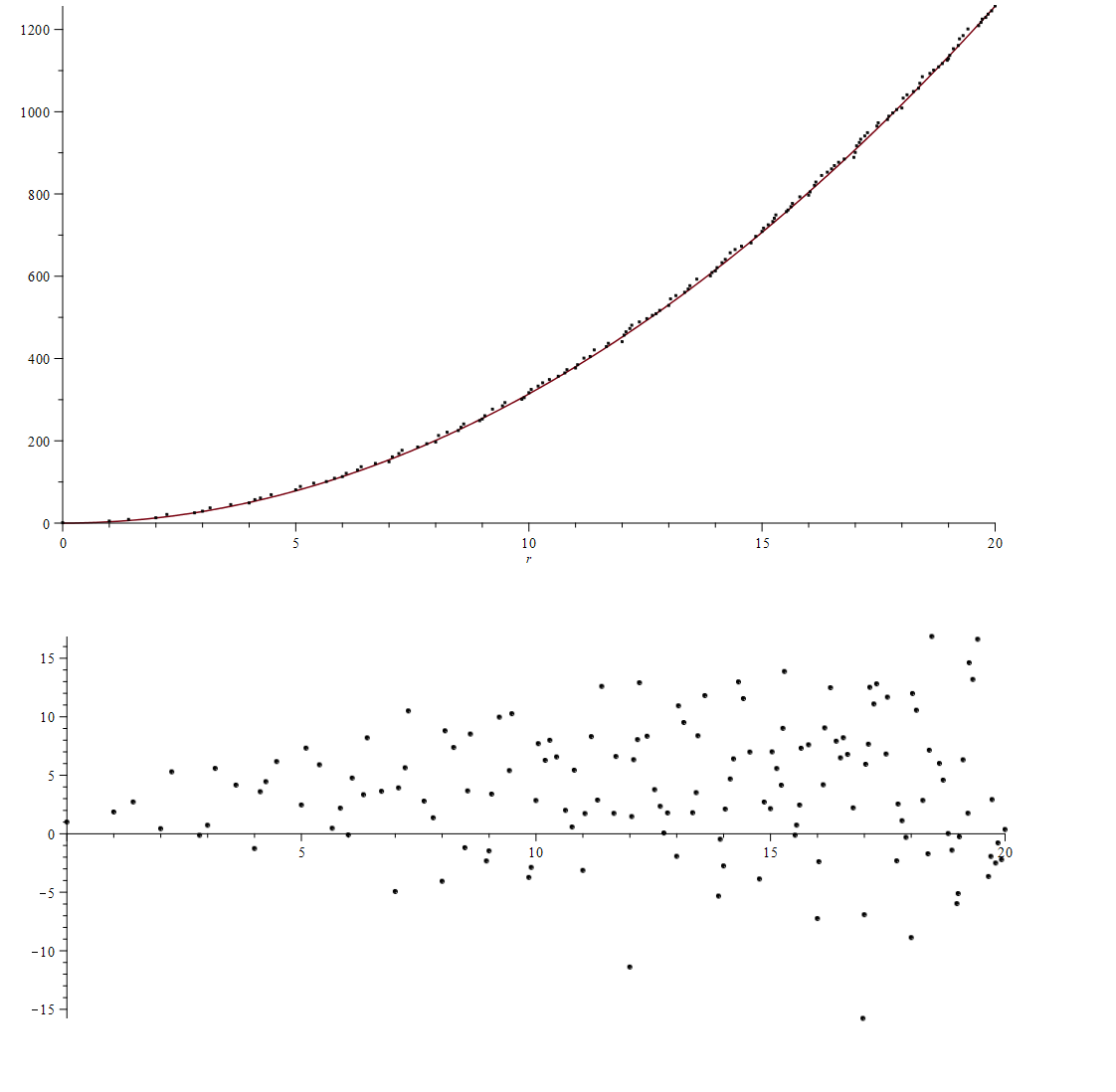 Here are some easily derived relations. Th equations are exact but the ingredients are not

The last inequality multiplies $\binom{n}{t},$ the number of ways to pick $t$ coordinates which are allowed to be non-negative, by $B_t(r)$ the (approximately known) number of lattice points in $\mathcal{B}_n(r)$ with $0$ in all the other $n-t$ coordinates and possibly some of those $t.$ It is an inequality because $C_n$ is the size of the union of those disks, but they are not disjoint. However, the intersections are small enough, relatively, that the error introduced is perhaps not worse then the error in approximating the $B_n$ by a volume.

Here are the first few

Finally, let us look at your question when $n=4$ with some special attention to $r=20.$

Here are the details:

Not the answer you're looking for? Browse other questions tagged nt.number-theory co.combinatorics lattices euclidean-lattices or ask your own question.