HOMFLYPT vs. Jones vs. Alexander polynomial?

I'm searching for examples (perhaps the simplest one?) to show that the HOMFLYPT polynomial is stronger than the Jones and Alexander polynomial, respectively.

Any ideas what is the 1st knot in the knot table (or any other bigger knot) that the HOMFLYPT polynomial distinguishes it, but the Alexander (resp. Jones) polynomial does not?

I will give an example that is likely not the simplest one. The example comes from the paper Behavior of knot invariants under genus 2 mutation by Dunfield, Garoufalidis, Shumakovitch, and Thistlethwaite (link here).

The construction of their example uses cabled mutation. A mutation in a knot diagram removes a round disk intersecting the diagram transversely in four points symmetrically spaced about the boundary, rotates the disk by $180^\circ$, then replaces it back into the diagram. The tangle inside the round disk consists of two arcs, and we say the mutation preserves these arcs if it switches the endpoints of arc one and switches the endpoints of arc two. A cabled mutation of the diagram takes a blackboard framed $n$-cable of the knot diagram and the same disk as before (now intersecting the knot diagram transversely in $4n$ points), and then removes the disk and performs the same arc-preserving rotation as before. See definition 2.10 in the linked paper for a more precise definition of cabled mutation.

The authors prove that cabled mutation preserves the Alexander and Jones polynomials, but does not preserve the HOMFLY-PT polynomial. Let $K_{75}$ be the knot with the $75$ crossing diagram below. 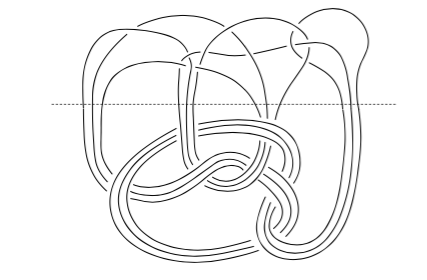 It seems unlikely that this is the smallest such example. In this StackExchange post, Kyle Miller followed Danny Ruberman's suggestion from the comments above and found no such examples among knots with twelve or fewer crossings.