I'm doing some research in visualizing arithmetic sets (resp. properties, resp. sequences of integers). I try to create patterns (in which I hope to observe some symmetries) by injectively mapping $\mathbb{N}$ on $\mathbb{Z}\times \mathbb{Z}$ in different ways and highlighting the numbers that have a given property (belong to a given set, are in a given sequence).

You can find a little tool with which I'm playing around here.

What I came up with has nothing to do with the initial approach (i.e. with arithmetic sets) but with transformations of $\mathbb{Z}\times \mathbb{Z}$. It's possibly interesting, but I'm missing conceptual tools to understand and explain it.

What I observed was that different spirals (i.e. regular bijective mappings $m: \mathbb{N} \rightarrow \mathbb{Z}\times \mathbb{Z}$ with $m(0) = (0,0)$) seem to be related by some kind of "quasi-rotations", combined with some scaling, translation and "disturbance" in the middle of the spiral. These transformations can be watched "in action" and indeed "feel" like rotations, sometimes accompanied by some characteristic intermediate "shrinking" (have a look).

I'd like to put these findings into mathematical terms and understand how they relate to each other and to the parameters of the spirals.

Let a spiral $S^i_j$ be parametrized by the width and height of its rectangular "eye", i.e. pairs of integers $(i,j) \in \mathbb{Z}\times \mathbb{Z}$. The "eye" of a spiral is a rectangle of integer side length with one corner in the origin, around which the spiral winds clockwise. This is the eye of the spiral $S^5_2$: 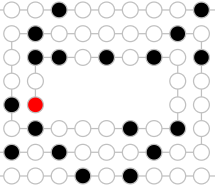 Each transition $T^k_l$ between spirals can be described by a pair of numbers $(k,l) \in \mathbb{Z}\times \mathbb{Z}$ such that

Obviously, the transitions $T^k_l$ form a group. A transition seems to be related to

[What's possibly not characteristic for a given transformation – but possibly depends on the spiral being transformed – is the intermediate "shrinking" factor which becomes visible only when watching the transformation "in action" (see $T^0_1$ sending $S^1_0$ to $S^1_1$, or $T^2_0$ sending $S^1_1$ to $S^3_1$, which both are not accompanied by a rotation).

How can I treat these ephemeral quasi-rotations in the context of "hard" group theory? Where in group theory is a place for transformations of the form "rotation + X" with a hard to grasp X?

At any rate, here are a few thoughts.

Visualizing an arithmetic sequence in this way is , as you say, not a new idea. The Ulam Spiral visualizing the primes is well known.

You seem to only be looking at sequences of integers $at^2+bt+c.$ These may visually seem to produce multi armed spirals. This depends on good rational approximations to square roots. At larger scale another structure corresponding to a better convergent may pop out visually.

Below is your representation of the non-negative integers and the same thing rotated by a quarter turn. The green lines indicate the squares. The third picture is the second spiral along with the smooth spiral given by the polar equation $r=\frac{-\theta}{\pi}$ with the points indicating that the integer $t$ is represented by $[\sqrt{t}\cos(-\pi \sqrt{t}),\sqrt{t}\sin(-\pi \sqrt{t})].$ 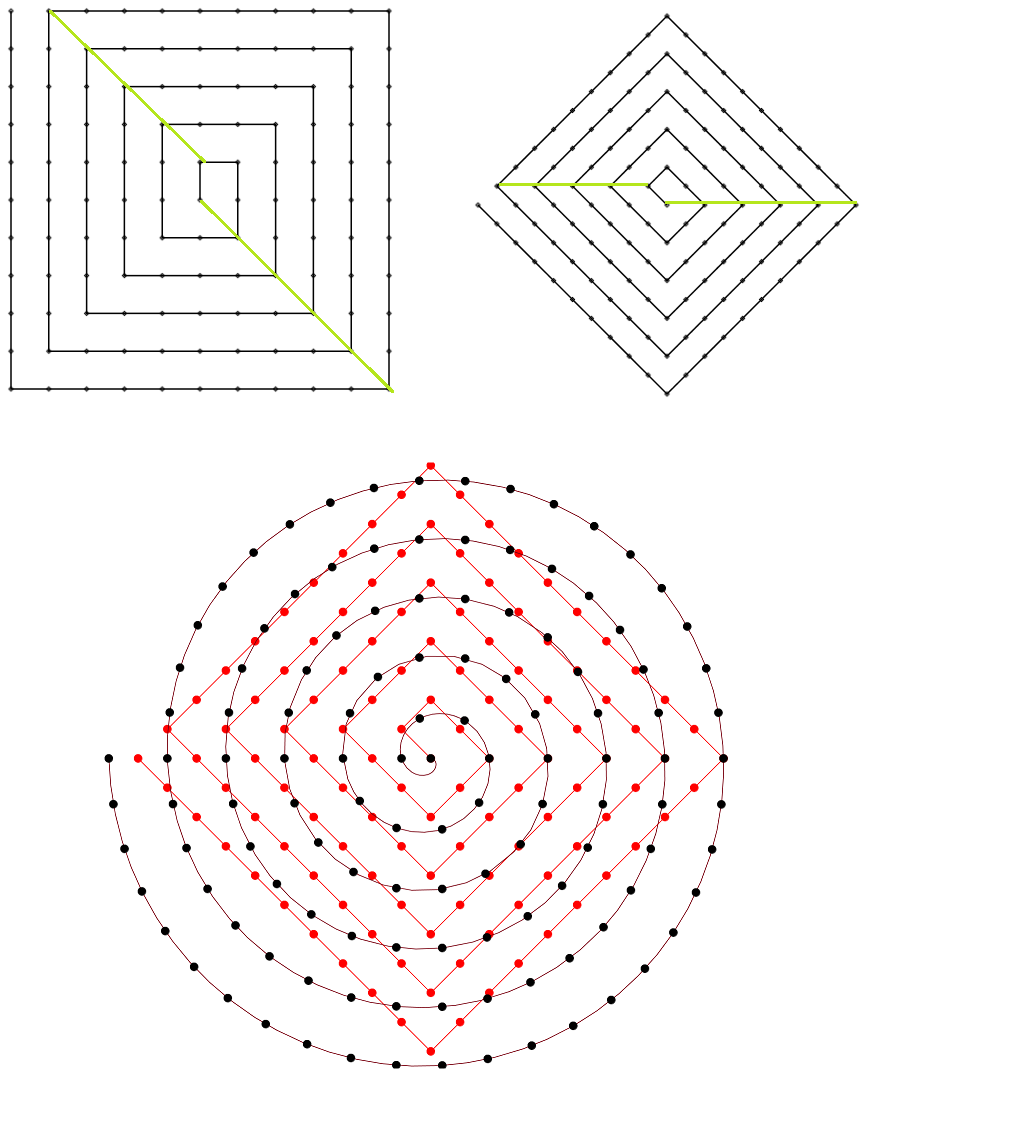 Now the squares appear exactly at the integer points of the $x$-axis. You may check that the points corresponding to the sequence $t^2+t$ are slightly displaced from the $y$-axis. With this transformation it makes sense to consider sequences such as $t^2+t+1/4.$ These , of course, appear exactly on the $y$-axis at the points between integers.

I'll claim without justification that the visual appearance of a quadratic sequence is about the same for the rectilinear spiral and the smoother one I am using. The rotation rate is essentially the same and the sampling is fairly sparse.

In your model and mine the triangular numbers $\frac{t^2+t}{2}$ seem to fall into a $3$ armed spiral. I'll explain that briefly by instead looking at the sequence $\frac{t^2}{2}$ which is visually very similar. 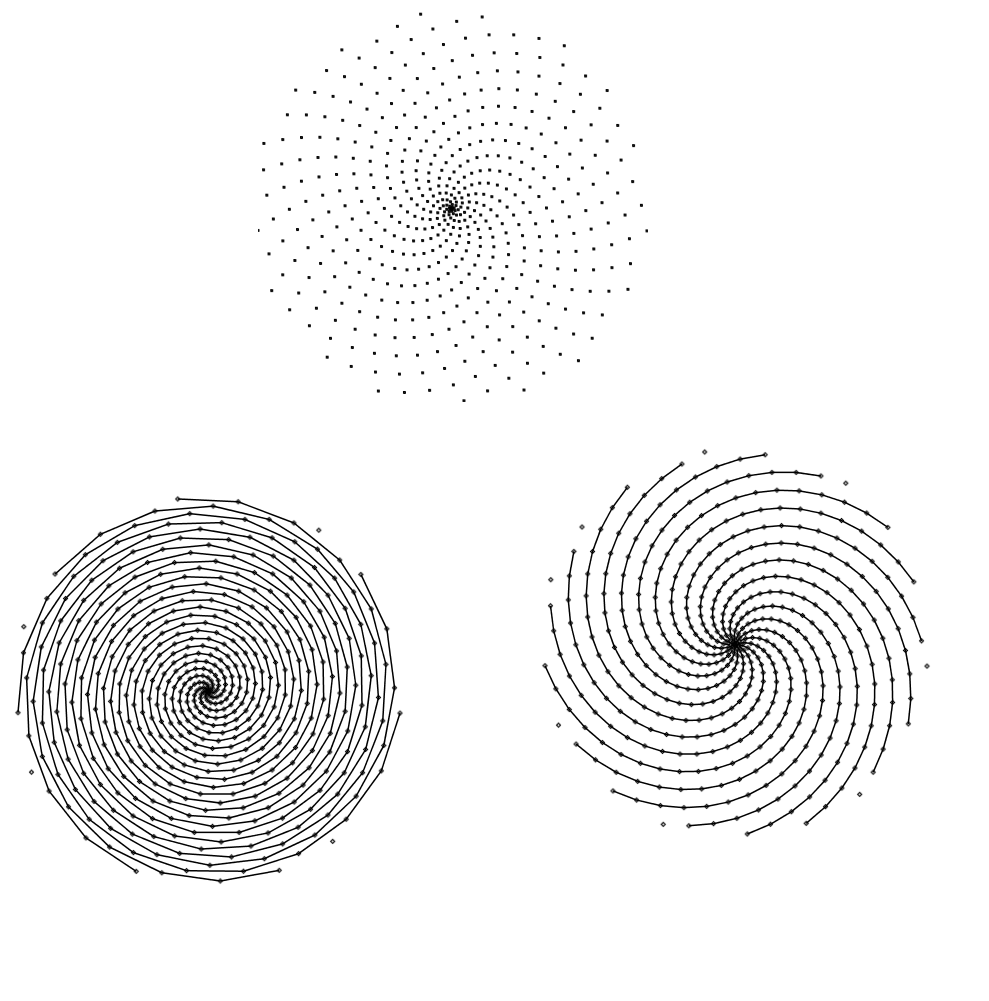 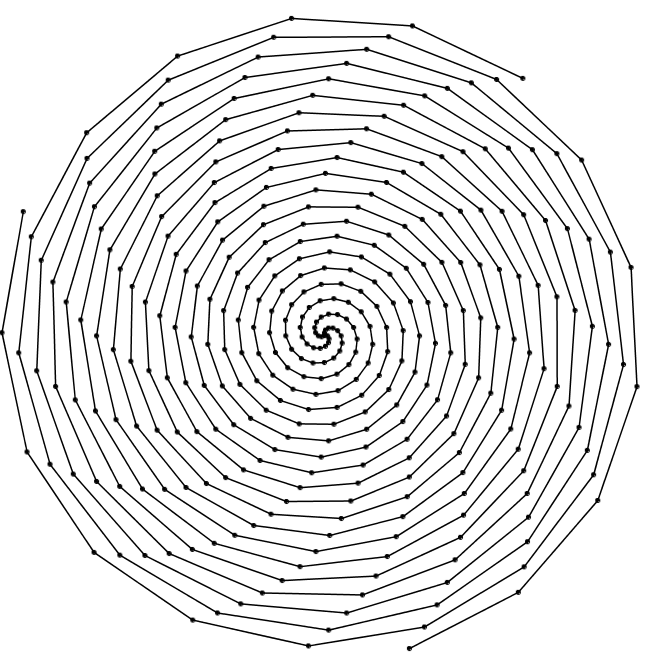 Not the answer you're looking for? Browse other questions tagged gr.group-theory group-actions experimental-mathematics or ask your own question.

0
Action of Isometries on a Line in the Plane
11
Multiplicative Identity for all elements in SU(n)
1
Does $\mathbb Z \times \mathbb Z$ mod the obvious $\mathbb Z$ action have more structure than just a set?
0
A Rng of rotations?
28
What determines the maximal dimension of the irreps of a (finite) group?
8
What is the subgroup of $\mathrm{SL}(n,\mathbb{C})$ which preserves the discriminant?
22
When does $G\times G\times G$ admit a faithful group action on a set of size $|G|$?
Question feed