Non-homeomorphic spaces that have continuous bijections between them

What are nice examples of topological spaces $X$ and $Y$ such that $X$ and $Y$ are not homeomorphic but there do exist continuous bijections $f: X \to Y$ and $g: Y \to X$?

" Anyone know an example of two topological spaces $X$ and $Y$ with continuous bijections $f:X\to Y$ and $g:Y\to X$ such that $f$ and $g$ are not homeomorphisms?

This example is due to G. Paseman.

I know this is super old, but somebody asked the same question again (Non-homeomorphic topological spaces) and so I wanted to share a "proof by picture" that settles the question.

(I came up with this a few years ago when I was grading an exam in which somebody claimed that $X$ and $Y$ are necessarily homeomorphic.)

Of course, this is just a special case of the accepted answer above. But I think it's nice to picture it in a geometric way... 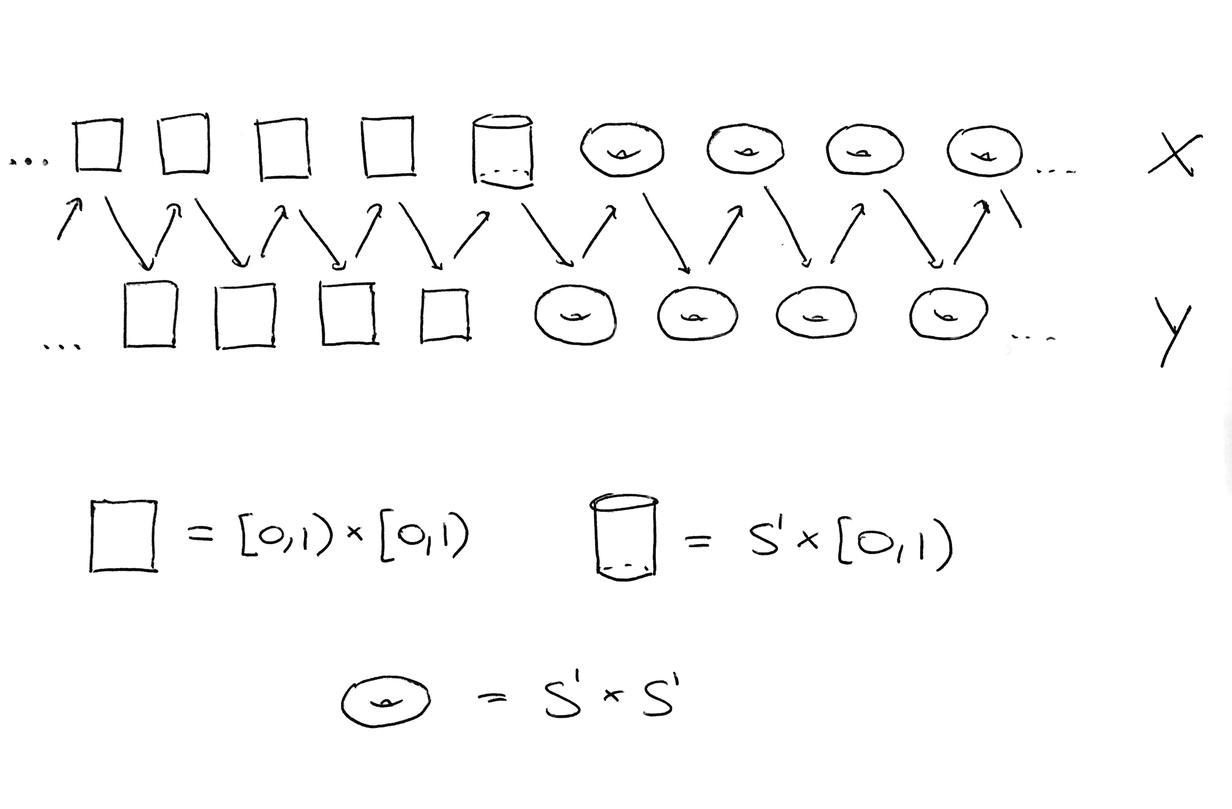 Here's a continuum analogue of Gerhard Paseman's answer: Let $X$ and $Y$ be topological spaces whose underlying sets are $\mathbb{R}$. As topological spaces, $X$ is the disjoint union of the open interval $(0,\infty)$ with a discrete space whose points are nonpositive reals, while $Y$ is the disjoint union of $(-1,0)$, $(1,\infty)$, and a discrete space whose points form the complement of those intervals. Translation by adding one is a continuous bijection from $X$ to $Y$, and also a continuous bijection from $Y$ to $X$, but the two spaces are not homeomorphic.

I've asked myself this question some time ago and found some counterexamples. After having done this I asked myself what the "smallest" counter example would be. First of all notice that if the set of opens in $X$ and in $Y$ have to have the same cardinality. This show that that if the number of opens in $X$ is finite then $f$ and $g$ both have to be homeomorphisms so the cardinality of the set of opens needs to be at least $\aleph_0$. The answer of Gerhard Paseman shows that using $2^{\aleph_0}$ opens is enough. But one can do better, here is an example that actually has $\aleph_0$ opens:

You may find the paper "Bijectively related spaces. I. Manifolds" by P. H. Doyle and J. G. Hocking intersting. They cite some related work, which is also worth checking.

There is a later paper "Unusual and bijectively related manifolds" by J. G. Hocking on this topic, which I have not read.

If you are also interested in spaces satisfying only low separation axioms, you may try my own humble work here and here.

I just posted an answer to this related MO question. To sum up the part that's relevant here:

Let $\mathcal N$ be the Baire space and let $X$ be any other zero-dimensional Polish space that is not $\sigma$-compact. Then there are continuous bijections $\mathcal N \to X$ and $X \to \mathcal N$.

I don't have a short proof of this assertion, but you can look at my paper for a proof, and at another paper of mine (joint with Arnie Miller) where some similar things are explored.

Now, let's fix a particularly nice $X$: say $X$ is the disjoint sum of $\mathcal N$ and the Cantor space $\mathcal C$. For this special case, I can give you a short proof that they're bijectively related (modulo a few well-known results).

To get a continuous bijection $\mathcal N \to X$:

By Exercise 7.15 in Kechris's Classical Descriptive Set Theory, a nonempty Polish space $Y$ is perfect if and only if there is a continuous bijection $\mathcal N \to Y$. $X$ meets these requirements.

To get a continuous bijection $X \to \mathcal N$:

Here is an example which comes from using the spaces of Charles Siegel's post.

One have a continuous bijection from [0,1) to the circle given by the exponential function ( t-->exp(2ipit) ). The idea is to use this to construct our spaces. Take A to be a wedge of countably many (one for each integer) [0,1) attached at 0. Let A_n be the same wedge but replacing the [0,1) corresponding to the integers from 1 to n by circles.

My favorite, which is on the wikipedia page for "homeomorphism", is $\phi:[0,2\pi)\to S^1$, by $\phi(\theta)=(\cos\theta,\sin\theta)$, which is continuous and bijective, but not a homeomorphism.

Not the answer you're looking for? Browse other questions tagged gn.general-topology big-list examples or ask your own question.

18
Non-homeomorphic spaces such that taking away a point makes them homeomorphic
40
Continuous bijections vs. Homeomorphisms
12
Non-isomorphic graphs with bijective graph homomorphisms in both directions between them
2
Topological properties for which bijectively related imply homeomorphism