Is there an efficient way to represent all non-simple cycles of a digraph up to the number of vertices?

First, it is known that tr$(A^n)$ where $A$ is the adjacency matrix of a graph gives the number of non-simple cycles of length $n$. So, in polynomial time, it is possible to determine whether such a bijection can exist between graphs $G$ and $H$. The question is how to find this bijection without simply enumerating all the possible cycles and pairing them off one by one which is at least an exponential algorithm.

My first thought was to use a cycle basis. However, when considering non-simple cycles, there isn't a unique vector representation in $\mathbb{Q}^{|E(G)|}$ since edges can repeat.

Are there any other representations of the cycles in a graph besides a cycle basis that could reduce the number of cycles to be considered to a polynomial amount?

Namely, since the eigenvalues are less than $|V|$ in magnitude, the number of non-simple cycles (more commonly called closed walks) of length at most $|V|$ is bounded by $|V|^{|V|+2}$. However the number of digraphs is around $2^{|V|(|V|-1)}/|V|!$ even if loops are forbidden, which is vastly larger.

Here is a kind of silly example but tell me what bijection you would want:

Both graphs have two vertices and multiple parallel directed edges. The adjacency matrices are

Even for very large $k>n$ the powers have the same trace , and are equal when the trace is not zero:

A picture is hardly needed but here is one with edge labels. 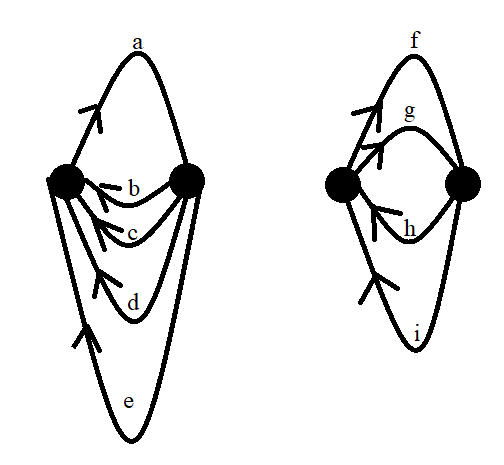 If you do not want multiple directed edges with the same head and tail then put a vertex at each letter. 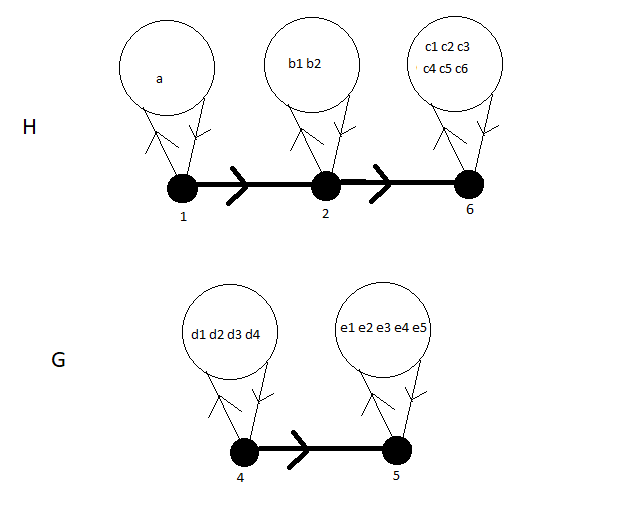 Q: What is your bijection?

Not the answer you're looking for? Browse other questions tagged graph-theory computational-complexity or ask your own question.

12
Can we map every graph in the plane such that all induced cycles selfintersect?
8
Maximal number of directed edges in suitable simple graphs on $n$ vertices without directed triangles.
1
Cycle double covering of cubic graphs
1
simple cycle analog in 2D (with application in tiling)
4
Name for directed graphs with “balanced cycles”
3
Removing cycles in a directed graph by swapping edges orientation
1
Explicit upper bound on the number of simple rooted directed graphs on 𝑛 vertices?
1
Does every primitive digraph have a directed cycle?
4
Co-trees of a simple graph
Question feed