Can we make 101 almost perfect banknotes from 100?

Disclaimer. The practical execution of the algorithm in question might be illegal in certain jurisdictions, and is thus strongly discouraged by the poser of the problem.

This recent post on the Muffin problem made me think of the following question.

So each original banknote is cut into at most $10$ pieces of substantial size, and each new banknote also consists of at most $10$ pieces. The patterns on these newly formed banknotes should match, so we also demand, say, that no part of a banknote appears twice on a new banknote. Of course, these numbers are quite ad hoc, I'm happy to see any similar result. Note that if we don't require each piece to be at least $10\%$, then it is easy to make the trick by cutting each banknote into only two (sometimes very unequal) parts. I also wonder if non-vertical cuts might help, but I would like to keep the pieces simply connected regions bounded by Jordan curves.

Also, is there some implication between this question and the Muffin problem?

This (top half) is a way to cut 49 banknotes into pieces of at least 10% each and (bottom half) reassemble them to 50 "98%" banknotes. Let $w$ denote the width and $h$ the height. The bills below have an aspect ratio of 1:2 but this isn't necessary. 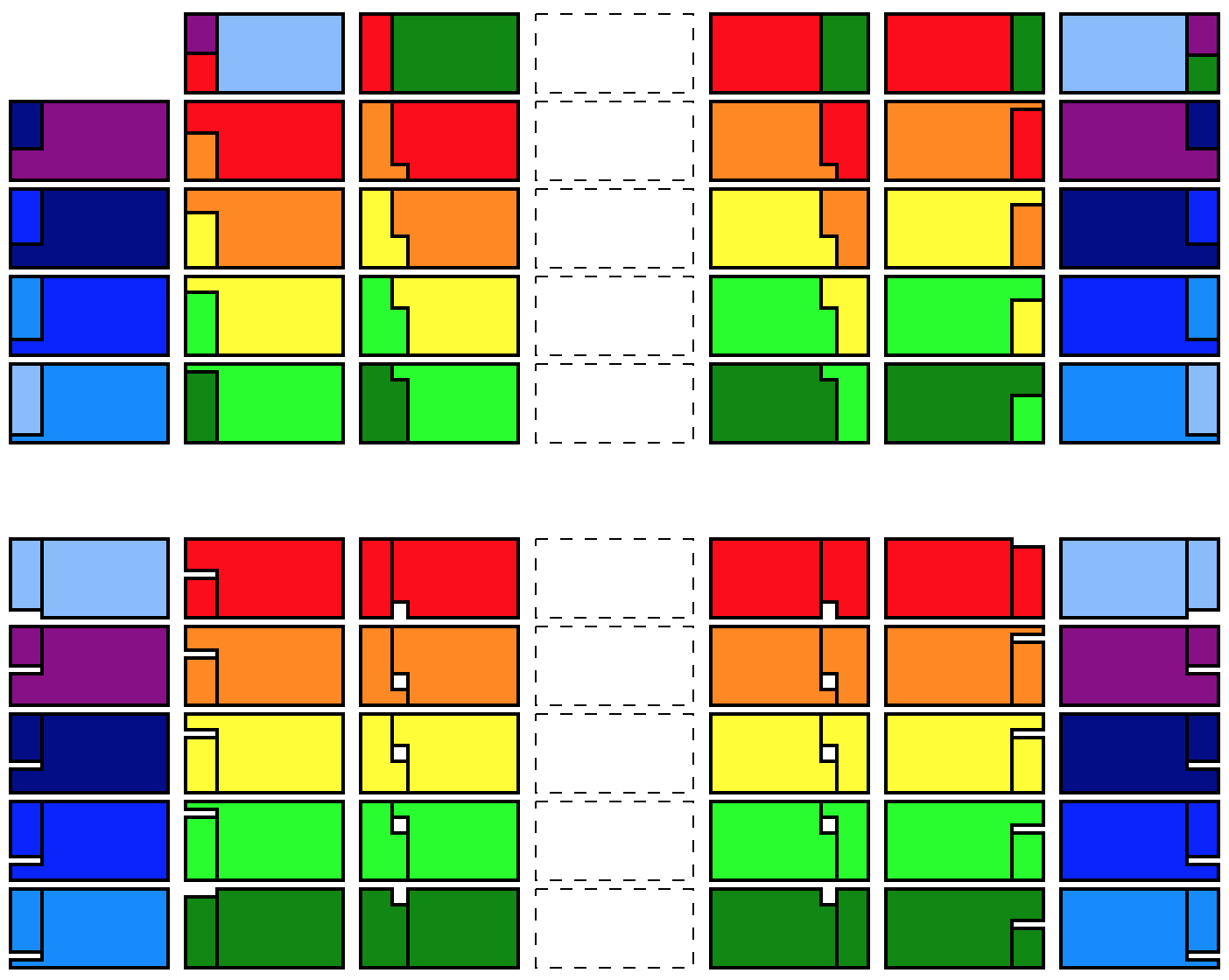 I hope that it's clear how the pattern continues in the center; simply use each leftover piece together with the next one (which is matching in color) to form a 98% bill; the size of the square gap is $\frac{w}{10}$ by $\frac{h}{5}$.

The two outer columns on both sides are trickier, because it's impossible get rid of the corners with the same scheme as used in the center. Therefore, we cut strokes with width $\frac{w}{5}$, moving $\frac{h}{10}$ downwards each time. Reassembling them gives 'inlets' of $\frac{w}{5}$ by $\frac{h}{10}$.

Note that all bills get cut into two pieces, except for the two with the large light blue part (top left and top right) which are cut into three pieces.

This video http://thekidshouldseethis.com/post/62804856022 shows a possible solution (well, not for banknotes but for chocolate and one piece is only about 4% in size). This is a variant of Paul Curry's paradox described in Martin Gardner's book "Mathematics, Magic and Mystery": http://store.doverpublications.com/0486203352.html In fact some real money was done from this paradox: a plastic version of Gardner's square was made in China and sold in stores. See Gardner's interview https://www.jstor.org/stable/25653710

However, a better way to make money is provided by Banach-Tarski paradox: A gold sphere can be chopped into a finite number of chunks, and these chunks can then be put together again to yield two gold spheres, each of which has the same size as the one that just went into pieces. See https://arxiv.org/abs/math/0202309 (The Banach-Tarski paradox or what mathematics and religion have in common, by Volker Runde). The history of this theorem can be colourfully traced through the paper https://arxiv.org/abs/1710.05659 (From Poland to "Petersburg": The Banach-Tarski Paradox in Bely's Modernist Novel, by Noah Giansiracusa and Anastasia Vasilyeva).

P.S. Even if we forget about preserving the pattern on the banknote, the Banach-Tarski paradox doesn't work for planar banknotes. As mentioned in https://www.sciencedirect.com/science/article/pii/S016800720300126X (On the Warsaw interactions of logic and mathematics in the years 1919–1939, by Roman Duda):

This is the famous Banach–Tarski paradox. By the way, one can ask about money: can a banknote produce two of its kind? It is a problem in applied mathematics, but the answer is, unfortunately negative: no bounded set in the plane can have such a paradoxical decomposition [41, footnote 1 on p. 218].

Not the answer you're looking for? Browse other questions tagged co.combinatorics recreational-mathematics puzzle or ask your own question.

29
Cutting a rectangle into an odd number of congruent non-rectangular pieces
3
Permutations of Grid Colorings
14
Partitioning the vertices of an n-cube with random hyperplane cuts
4
Ruin time for a two-input "risk only" slot machine
12
Minimal possible cardinality of a $(a_1, ..., a_k)$-distributable multiset
63
How to be rigorous about combinatorial algorithms?
13
Can you make an identity from this product?
Question feed