Four circles on the sphere

Equivalent problem: classify the arrangements of 4 hyperbolic planes in the hyperbolic space, up to homeomorphisms of the space.

Before voting to close this question as trivial, you may look at the classification of generic configurations which we obtained by brute force: 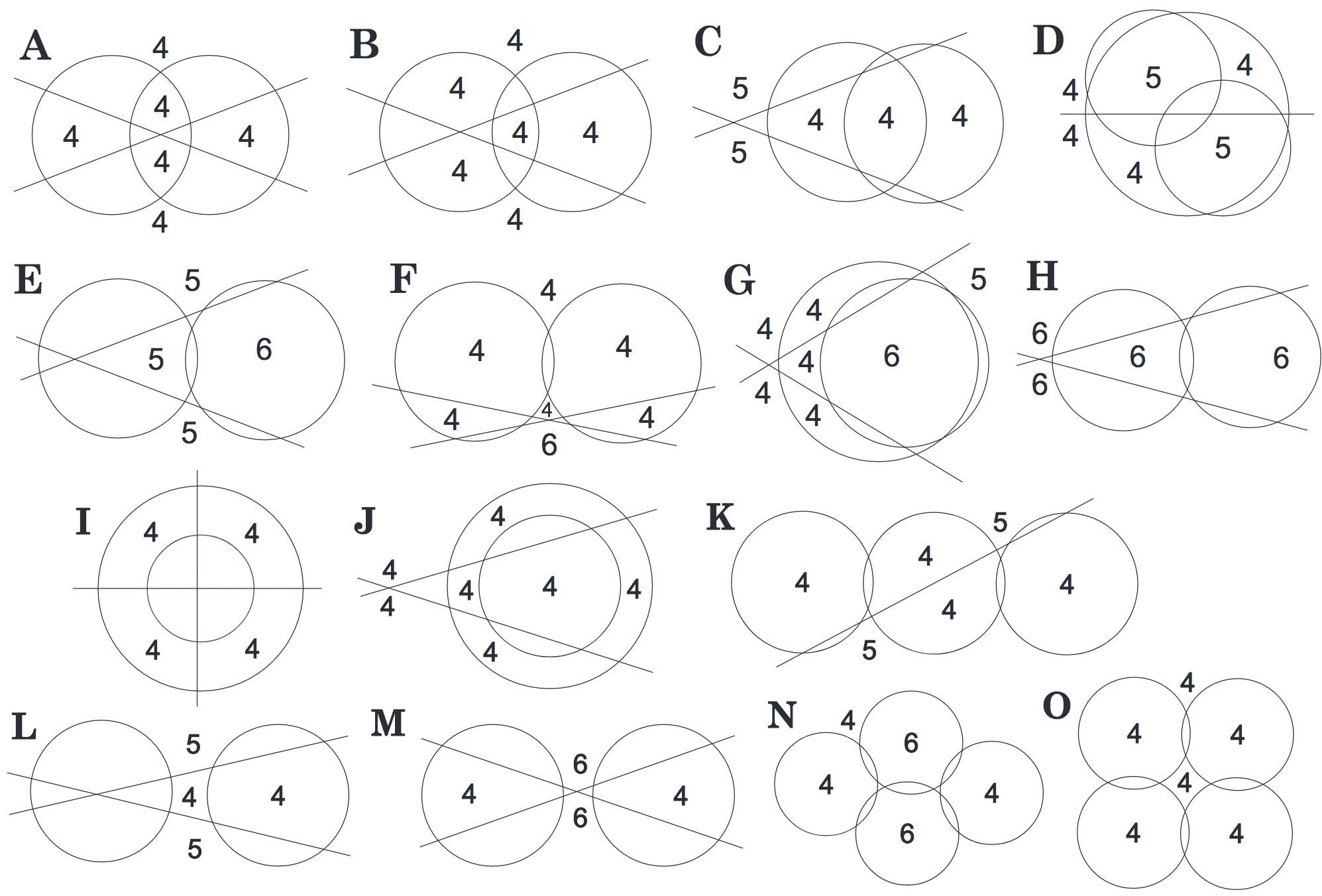 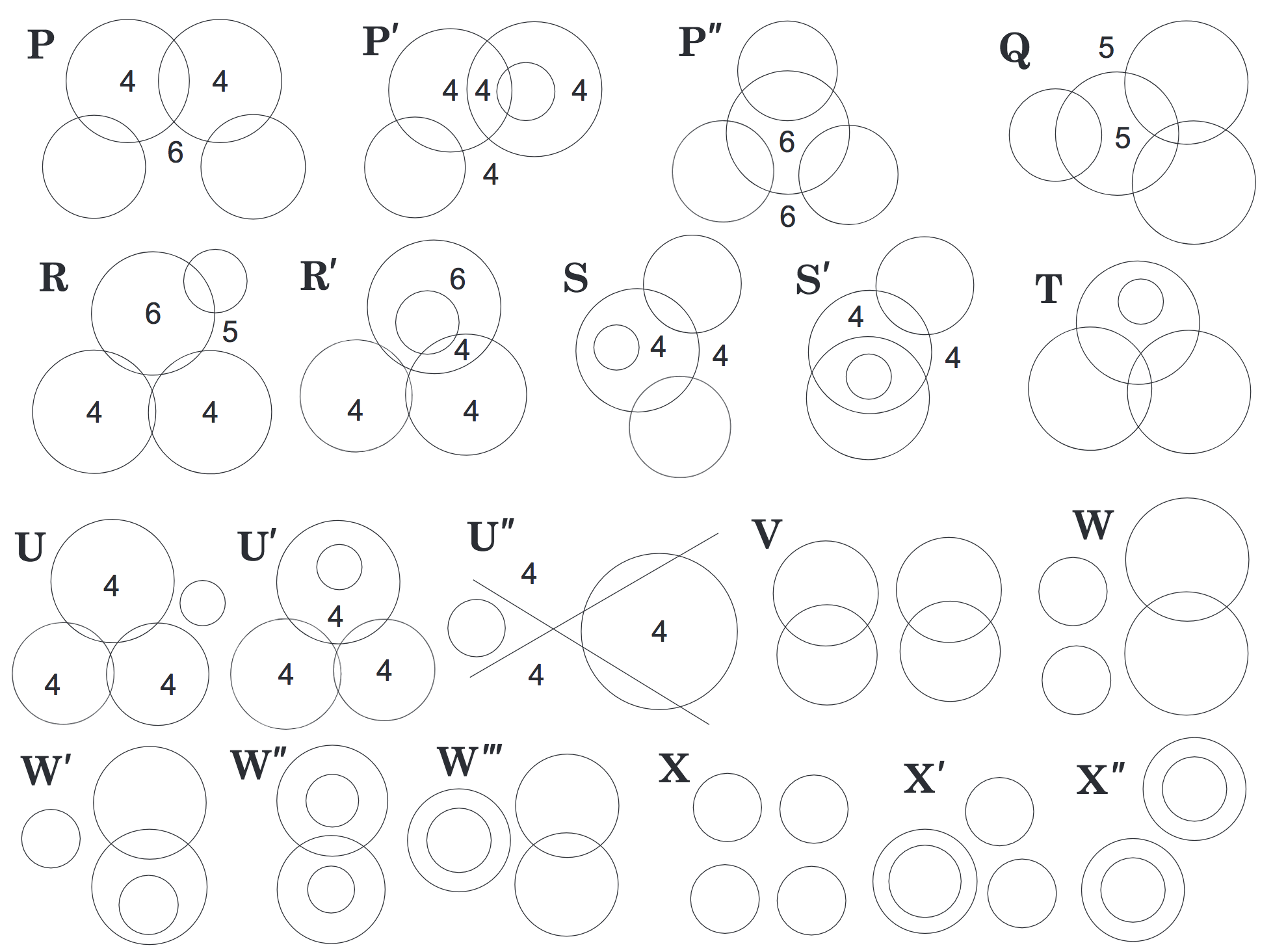 Each region bounded by more than 3 sides is labeled by the number of its boundary sides. This is used to show that all configurations are non-equivalent.

Questions: Is this new? Is there a scientific method to obtain this? Is there any structure on these 35 configurations?

There is a large research area about hyperplane arrangements in a Euclidean space. How about hyperbolic space? There is also a large body of research on hyperbolic tetrahedra. But it is always assumed that the tetrahedron is compact (or has only vertices at infinity).

We encountered this question in our studies of the Heun and Painlevé VI equations with real coefficients. (See Appendix II in the linked paper). Projective monodromy groups associated to these equations are generated by 4 reflections in circles.

EDIT. It seems that the problem is of purely topological nature: for any collection of Jordan curves on the sphere, such that each pair intersects transversally at at most two points, there exists an equivalent configuration of circles: A. Bobenko, B. Springborn, Variational principles for circle patterns and Koebe's theorem. Trans. Amer. Math. Soc. 356 (2004), no. 2, 659–689.

EDIT2. The previous remark is incorrect (thanks to Ivan Izmestiev for his comment). A counterexample with 5 curves is contained in this paper: MR3216670 Kang, Ross J.; Müller, Tobias Arrangements of pseudocircles and circles, Discrete Comput. Geom. 51 (2014), no. 4.

EDIT3. From the very last Notices AMS (October 18) I learned that the number of arrangements of $n$ circles on the plane has been studied, and that this number even has a name A250001 in the Online encyclopedia of integer sequences. However, even for n=4 it is not easy to derive the result for the sphere from the result for the plane (the only way to do this that I see is by brute examination of of equivalences of configurations).

Not an answer; don't have enough rep to comment. You may be able to impose some structure by using the operation of crossing/uncrossing two circles which are otherwise adjacent (That is, they currently do not cross and crossing them such that there is a new region with two boundaries, or conversely removing that region).

I'm not sure whether this structure is interesting, but it was a thought I had upon seeing your classification. I can't provide much more of the structure, as it's rather difficult to work out by hand.

Not the answer you're looking for? Browse other questions tagged gt.geometric-topology discrete-geometry hyperbolic-geometry or ask your own question.

8
Stratification of space of labelled circles in the plane

10
Embedding the product of three circles in the 4-sphere.
4
Colored arrangements of circles on the two sphere
15
Linked circles in R3
9
Geometry of the space of circles in the Euclidean plane
8
What's the difference between a PL simplicial sphere and a shellable simplicial sphere?
5
The number of co-circular four tuples
3
Moduli, Teichmüller spaces and mapping class group of a sphere with four punctures
2
Coordinate transformation for the hyperbolic plane to the pseudo sphere
Question feed