(Some possible obstructions to ) Limit cycles as closed geodesics(3)

First we explain our Motivation:

First note that there is no a Riemannian metric on an open set of the plane which possess two nested closed geodesics $\gamma_1, \gamma_2$ and the curvature in the annular region made by these two closed geodesics has constant sign(either positive or negative).

But the same is true if we keep the closed geodesic $\gamma_1$, the innermost one, and replace the smooth closed geodesic $\gamma_2$, the outermost one, by a non smooth one denoted again by $\gamma_2$ provided $\angle p+\angle q =2\pi$. (Please see the figure bellow). In fact $\gamma_2$ is the union of two pieces of geodesics whose union make a simple closed curve which can be counted as a 2-polygon(with two vertex $p,q$), whose sum angles is $2\pi$, look at the following figure(Note that the horizontal axis is assumed to be a geodesic as well as other curves in the figure> Furthermore it is obvious that by "angle" we mean Riemannian angle, that is the angles $\angle p$ and $\angle q$ are Riemannian angles not the Euclidean angle drown in the picture ): 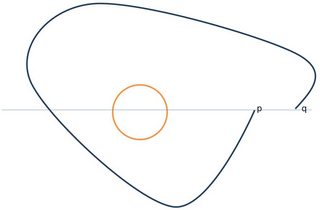 In the above figure all curves are assumed to be geodesics including the (horizontal) $x$-axis.

On the other hand, in this question, Limit Cycles as closed Geodesics(2), we had intention to consider limit cycles of a quadratic vector field as closed geodesic. Our approach is based on usage of Gauss Bonnete theorem so the sign of Gauss curvature play a crucial role. So we observe that certain "Isocline -type property" of foliation by geodesics could be an obstruction for Looking at limit cycles as closed geodesics in a negatively curved space. We explain this "Isocline- type property" in the main part of our question

Main part of our question:

Let $X=P\partial_x+Q\partial_y$ be a quadratic polynomial vector field on $\mathbb{R}^2$.

Associated to the above quadratic vector field, we consider the Riemannian metric on $M=\mathbb{R}^2\setminus C$ whose orthonormal frame is the following: $$\left\{\frac{x^2+y^2}{yP(x,y)-xQ(x,y)}V,\ W\right\}.$$

Then all orbit of the vector field are geodesic of the metric with the above frame. So we have a foliation by geodesics $\mathcal{F}$ on the Riemannian surface $M$.

Question: Is there an example of such situation with the above Local isocline property? As a more general question: Is it true to say that every foliation associated to a quadratic vector field necessarily satisfies the above local property? (A possible positive answer to the latter two questions is an obstruction for consideration of limit cycles as closed geodesics in negatively or positively curved space.) But if the answer is "No", can we choose an appropriate $W$ in the above frame such that this local property fail at all point $x\in M= \mathbb{R}^2\setminus C$?

Note 1: The above definition of "Isocline Local property" is a corrected version of the following post:

Note 2: With the same argument as the materials of this post one can prove the following obvious observation:

There is no a conformal Riemannian metric on the punctured plane with non vanishing curvature with the following two properties:

2)The positive $y$-axis is a geodesic.