Cops & Robbers is a certain pursuit-evasion game between two players, Alice and Bob. Alice is in charge of the Justice Bureau, which controls one or more law enforcement officers, the cops. Bob controls a single robber, a guy whose main concern is to evade the cops at any costs. Both deploy their guys on the vertices of a city, a simple graph, and start a manhunt under the following natural rules:

Cops & Robbers and its variants have been studied on finite graphs so extensively, while little is known in the case of the infinite graphs, particularly those of uncountable cardinality which are the subject of this question. One may take a look at the following references for a fairly comprehensive account of the topic (including some results concerning the infinite version) or watch this and this episodes of PBS Infinite Series show by Kelsey Houston-Edwards:

Definition. We call connected infinite graphs with minimum and maximum possible cop-numbers (i.e. $1$ and $|G|$), law and crime neighborhoods respectively. A Mega City is an infinite connected graph, $M$, with the "dystopian" property that $M$ contains either a law or a crime neighborhood as big as $|M|$ as its sub-graph. An uncountable cardinal $\kappa$ is a Dredd cardinal (named after Judge Dredd) if every connected graph of size $\kappa$ is a Mega City.

The first question is about the possible large cardinal strength of the existence of such a Ramsey-like cardinal.

Question 1. Is there any Dredd cardinal? What is their large cardinal strength in comparison with other large cardinals of some Ramsey characterization such as weakly compact, Erdős, and Ramsey cardinals?

Remark 1. An approach towards question 1 might be through considering $\kappa$-Aronszajn trees and checking the tree property which provides a characterization of weakly compact cardinals. Maybe one can relate the cofinal branches in a $\kappa$-tree to the law or crime neighborhoods in a Mega City of size $\kappa$, given the fact that trees and paths are rather simple cities to analyze for the game of cops and robbers. Also, as Will mentioned in his comments here and here, in the definition of a Mega-City the connectedness assumption is essential for the whole graph and crime neighborhoods in order to avoid easy constructions.

The next question is about the possible characterization of infinite connected graphs with arbitrary cop-numbers.

Question 2. Let $\kappa$ be an infinite cardinal and $1\leq \lambda\leq \kappa$. Is there a connected graph of size $\kappa$ and cop number $\lambda$? How many graphs of this type are there up to isomorphism (for any given $\kappa$, $\lambda$)?

Remark 2. Concerning the question 2 in the special cases such as $\kappa=2^{\aleph_0}$, an approach could be thinking about using cardinal characteristics of the continuum for constructing examples of connected (directed) graphs of size continuum with cop numbers strictly less than $2^{\aleph_0}$. In order to observe this, note that cop number of any graph is less than or equal to its domination number because one may catch the robber in the first move simply by deploying one cop on each vertex in a minimal dominating set of the graph. The idea is that the set-theoretic dominating number, $\mathfrak{d}$, serves as the domination number of a graph, $G$, of size $2^{\aleph_{0}}$ (don't confuse the similar terms in set theory and graph theory with each other). At the request of Monroe, let me clarify the example a little bit more:

However, one should note that generally, the domination number is a very loose upper bound for the cop number of a graph. (Certainly, the Justice Bureau has much more clever strategies to control the crime rate in the city rather than placing a cop right in the front of every single home!) For instance, the domination number of the dodecahedron graph (of size $20$) is $7$ while its cop-number is only $3$. Here, the following question arises:

Question 3. What is the cop-number of $G$, the sequence domination graph of size continuum described in the previous remark? Can it be countable? If not, what is the precise value of this new cardinal characteristic of continuum and how does it relate to the other entities in the Cichoń's diagram?

Every uncountable regular cardinal is a Dredd cardinal.

For suppose $\kappa$ is an uncountable regular cardinal, and let $G$ be a connected graph on $\kappa$ vertices.

Let $v$ be a vertex of $G$ with degree $\kappa$. Then $G$ has a size-$\kappa$ "law" neighborhood, namely the subgraph formed by $v$ together with all of its neighbors. (This is a law neighborhood because the cops have a simple winning strategy: place an officer at $v$, and then capture the robber in their next move!) QED

This shows that there are plenty of Dredd cardinals, and no large cardinal axioms are necessary to find them, answering question 1.

Here is an answer to question 2. First note that it suffices to consider the case where $\lambda=\kappa.$

For regular $\kappa,$ you may consider the following graph: 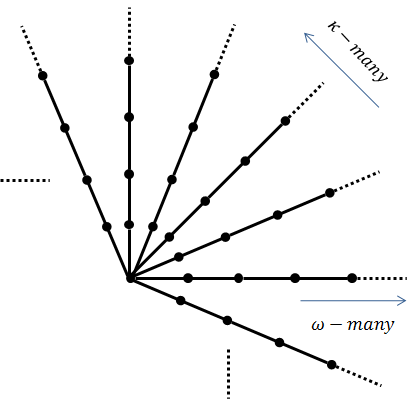 The point is that given less than $\kappa$-many points on the graph, there exists a line on which there are no points, except possibly on the center. 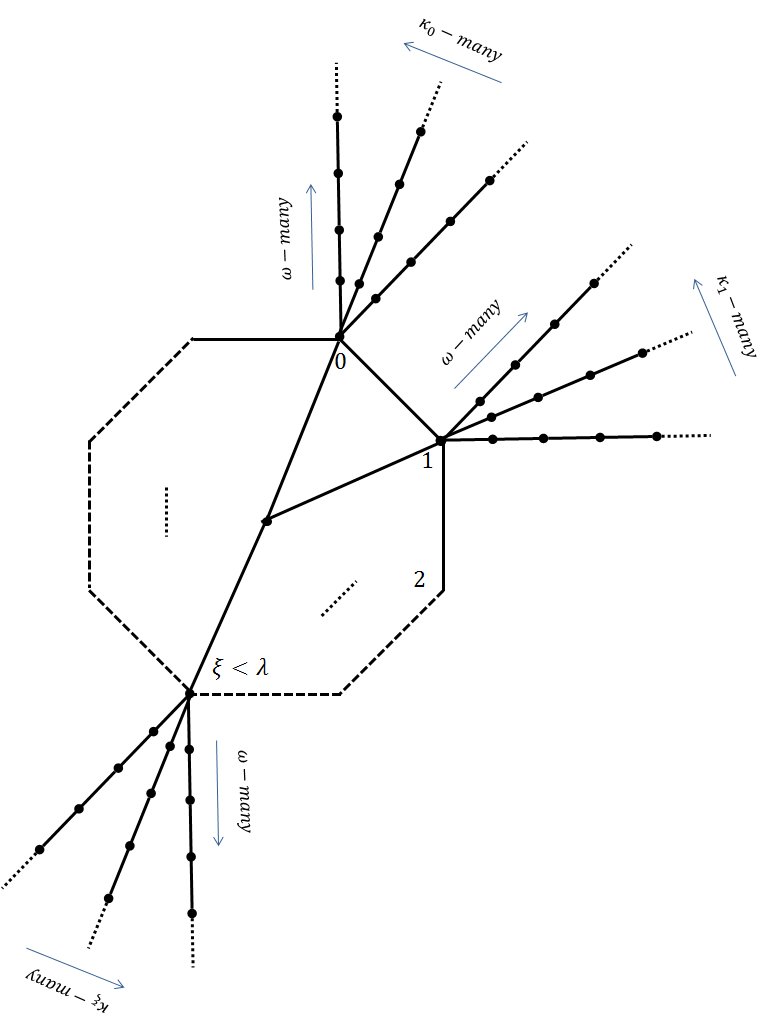 Here is an attempt at answering Question 2:

Start with a graph $H$ with cop number $\lambda$. If $\lambda$ is finite, then there is a finite such graph (e.g. by Theorem 1.1 in this paper) for infinite $\lambda$ this can be $\lambda$ rays with a common starting point. Then attach $\kappa$ many leaves to any vertex $v_0$ of $H$ to obtain a graph $G$.

The resulting graph obviously has $\kappa$ vertices (we'd have to be more careful to say something about finite $\kappa$ though).

To see that $G$ has cop number at most $\lambda$, observe that the cops can play the same strategy on $G$ as on $H$ (if the robber moves to one of the new leaves, then they just pretend that he's at $v_0$ instead). When the game on $H$ ends, then either the robber is captured, or he is at one of the new leaves with a cop positioned at $v_0$ (and hence he will be captured in the next move).

To show that the cop number of $G$ is at least $\lambda$, observe that the robber can play a winning strategy against any smaller number of cops on $H$ (and pretend that cops that have moved to new leaves are at $v_0$).

As for the number of nonisomorphic examples: in the arguments above it was not essential that $G - H$ is edgeless, in fact we can take any graph on $\kappa$ vertices and connect all of its vertices to $v_0$ and the same argument still goes through.

Not the answer you're looking for? Browse other questions tagged co.combinatorics graph-theory set-theory large-cardinals game-theory or ask your own question.

363
Thinking and Explaining
45
Can the fugitive escape?