Which large cardinals have a Matryoshka characterization?

What on Earth do Russian Matryoshka dolls have in common with large cardinal axioms?! Well, the answer lies in Jónsson algebras! Here is how:

As illustrated in the pictures, a Matryoshka set is a self-replicating container in which the mother doll contains a similar copy of itself. This sub-doll also contains a rather smaller similar copy of itself and so on. The dolls in a Matryoshka set could be completely isomorphic in shape (often depicted as a chubby Russian girl wearing Sarafan, the beautiful Persian-named traditional Russian dress) or with some slight differences in spite of general similarity (e.g. Different species of Taiga). 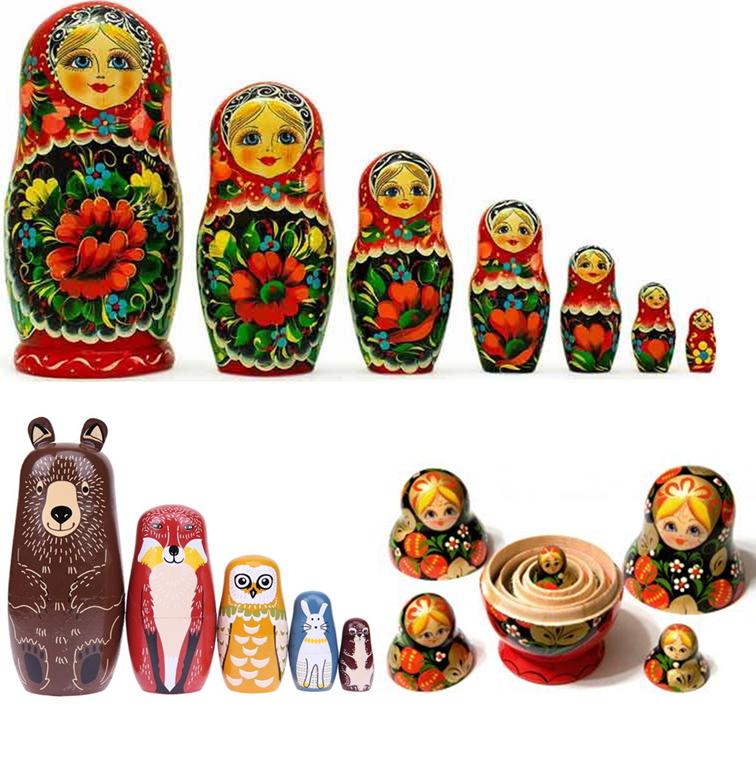 As the allegory suggests, the Matryoshka phenomenon is not uncommon in mathematics. There are (infinite) self-replicating mathematical structures which contain some proper isomorphic copies of themselves or at least have a fairly similar (e.g. elementary) proper sub-structures of the same size as the mother structure. Jónsson algebras provide an iconic example of this type.

Definition 1. Let $M$ be a model in a countable language. $M$ is called a Jónsson algebra (model) if it does not have any proper (elementary) submodel of the size $|M|$.

Definition 2. An uncountable cardinal number $\kappa$ is called Jónsson if for every function $f:[\kappa]^{<\omega}\rightarrow \kappa$ there is a set $H$ of order type $\kappa$ such that for each $n$, $f$ restricted to $n$-element subsets of $H$ omits at least one value in $\kappa$.

According to the following fact, it turns out that the demand for every infinite first-order structure in a countable language to have a proper sub-structure of the same size (i.e. non-existence of Jónsson algebras) has the large cardinal strength of a Jónsson cardinal which is a fairly strong large cardinal assumption incompatible with the Axiom of Constructibility.

Theorem. For an infinite cardinal $\kappa$, the followings are equivalent:

The above fact indicates that the occurrence of a Matryoshka phenomenon (i.e. having self-replicating structures) among certain types of mathematical structures may give rise to some large cardinals. In other words, a structure needs to be so large in order to be able to support a self-replicating Matryoshka-like structure. In this sense, Jónsson cardinals have a characterization in terms of a Matryoshka phenomenon for certain type of mathematical structures, namely algebras.

Here, the natural question to ask is whether there are other examples of a Matryoshka characterization for large cardinal axioms. In other words, what other Matryoshka phenomenona for mathematical structures do have some large cardinal strength? Precisely:

Question 1. What are some other examples of large cardinal characterizations of the following form?

Note that we are not limiting ourselves to the first order structures or structures in countable language. The question is considering the possible existence of such a characterization for large cardinal axioms anywhere in mathematics where a theory around certain type of "mathematical structures" (whatever it means depending on the context, say functional space or a manifold) evolves.

"Every algebra of size $\kappa$ contains a proper sub-algebra of the same size which is isomorphic to the original structure."

It seems to me that the Berkeley cardinals can be thought of in line with your Matryoshka analogy. Namely, a cardinal $\kappa$ is Berkeley, if for every transitive set containing $\kappa$ there is an elementary embedding $j:M\to M$ with critical point below $\kappa$. Thus, $M$ contains an isomorphic copy of itself, namely the image $j"M$, as a proper subalgebra, which is furthermore an elementary substructure. So this large cardinal notion combines some of the features you mention.

These cardinals are stronger than Reinhardt cardinals in consistency strength, and they are inconsistent with the axiom of choice.

Adding to Joel's answer, there is a weak form of Berkeley cardinals having almost the property you want and whose existence is consistent with the axiom of choice (in fact with ZFC + $V = L$.)

Note: the cardinals defined in Joel's answer are sometimes instead called proto-Berkeley cardinals, but I'll call them Berkeley cardinals here for the sake of consistency. (The difference is whether or not the critical points of such $j$ are unbounded in $\kappa$.)

Note that the range of such a generic elementary embedding is a proper elementary substructure of $(M;\in)$ that is isomorphic to $(M;\in)$. However, the embedding and its associated substructure typically exist only in a generic extension in which $M$ (and therefore $\kappa$) is collapsed to be countable.

If $0^\sharp$ exists, then one can show that every Silver indiscernible is a virtual Berkeley cardinal in $L$. This is fairly easy, using the fact that the existence of an elementary embedding $j : M \to M$ with critical point below $\kappa$ is absolute from $V$ to any generic extension of $L$ in which $M$ is countable.

Not the answer you're looking for? Browse other questions tagged ct.category-theory set-theory model-theory large-cardinals or ask your own question.