While I was discussing this question with @JamesMartin, he mentioned a result here that:

In a $n\times n$ finite square grid, if $p\geq p_c+\epsilon$, such that $\epsilon>0$ and $p_c$ is the critical point for percolation, then with a high probability there is a single large component of linear size i.e. $O(n)$ and all other components are small i.e. $O(\log(n))$.

This result looks extremely interesting but I couldn't manage to find it's statement or proof in any of the standard percolation books (it is possible that I missed it, but I did try looking for it as much as possible), like Bollobas and Riordan or Grimmett.

By the way, one thing I'm confused about is that James mentioned $p_c$ is that critical point where $\theta(p)$ becomes positive for the first time. He gave the definition of $\theta(p)$ as:

Fix the grid $\Bbb{Z}^{2}$. The origin is $(0,0)$. $\theta(p)$ is the probability that $v$ (any other point on the square grid) is contained in an infinite open cluster. This is the same for every point $v$ if the model is translation invariant.

So, my questions are:

Moreover, the definition of $\theta(p)$ is not clear to me. 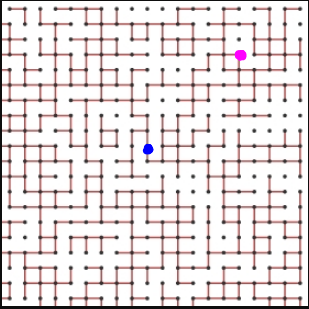 Here is a reference for part of the theorem referred to by James Martin.

The DOI link seems to be broken right now so you can also try this or this.

Theorems 3.2 states that with probability going to 1 as $n\rightarrow\infty$, the largest open cluster in an $n\times n$ box is of size $\theta(p)n^2$, which is the first part of what James Martin states (except that $O(n)$ was a typo for $O(n^2)$). (More precisely, this is proved under a set of postulates which are then proven to hold for $\mathbb{Z}^2$ in theorem 3.6.)

Thus in this reference, the answer to question 3 is that "large component" simply means "largest component".

I couldn't immediately find a reference for the statement that the next largest components are of logarithmic size, but Theorem 3.1(iii) in the paper cited above at least proves that the expectation value of the second largest cluster is sublinear in the total number of sites.

2
Can this particular random matrix model be converted/related to any existing graph theory model?
1
Does there exist any analogous result for site percolation?