Suppose you have $n$ triangles whose corners are random points on a sphere $S$ in $\mathbb{R}^3$. Viewing the triangles as built from rigid bars as edges, two triangles are linked if they cannot be separated without two edges passing through one another. A triangle that is not topologically linked with any other is loose. In the example below of $n=15$ triangles, $11$ are linked to at least one other triangle, and $4$ are loose. 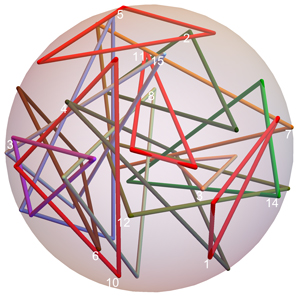 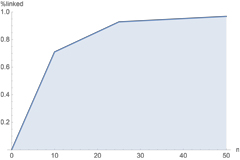 Q. As $n \to \infty$, what is the probability that every triangle is linked into one giant component? 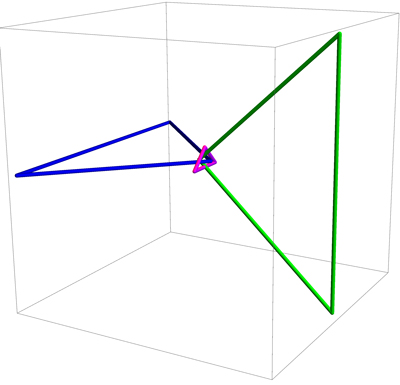 Here is an idea which suggests why the probability is near zero as the number of triangles gets large.

Among the many random triangles, there is one which has the smallest area as measured when embedded in the plane. Let us call this triangle T, and consider how likely that another triangle links with it.

Pick a random point p on the sphere. From the vantage point of p, look at T. For p belonging to much of the sphere, T looks small and tilted, so that a chord from p passing through the interior of (the plane embedded version of ) T will strike the sphere on the other side in a small area. (Bisecting the sphere by the plane of T, such a chord has to have an endpoint in either piece. If the triangle is contained in a small cap, the strike area for much of the sphere is within this small cap.)

However, not only does this point opposite p (call it q) reside in this small cap, it has to "see" a point away from the triangle: if it just connects to another point by a chord passing through the triangle interior again, there is no link. In particular, the chord from q that does not head to p has to live in a minimal cap that contains q and one of the small edges of T. (I am ignoring the case that q is near the boundary of the small cap.)

To measure how unlikely this is, consider the following. For a given T and many points q in "the small cap" of T, compute the area of the three small regions given by that part of a new cap determined by a plane containing q and an edge of T and the region of interest being on that part of the cap "on the other side of the edge from q". If T has small area (and q lies "sufficiently inside" T), the area of these three regions will be even smaller than T. You now need the probability that a point q lands inside of (the small cap part of ) T, with a point r that lands in the special region that would give a link, which intuitively is of the same order as the area of T, multiplied by the probability that p permits a linking triangle with T (which is much larger than the previous probabilities).

This might result in a small but significantly far from zero probability of occurring. But now, take the number of small triangles to be large, and it becomes easy to believe that one of these small triangles is not linked to any other.

Not the answer you're looking for? Browse other questions tagged pr.probability mg.metric-geometry knot-theory knot-link or ask your own question.

17
Random rings linked into one component?

10
Random geometric graphs and spanners
16
In an Erdős–Rényi random graph, what is the threshold for the property “every edge is contained in at least one triangle”?
17
Random rings linked into one component?
9
Diameter of random segment intersection graph?
2
Is the Erdős–Rényi giant component result applicable here?
1
Can this particular random matrix model be converted/related to any existing graph theory model?
11
Growing a chain of unit-area triangles: Fills the plane?
4
Algorithm for reporting all triangles with unique interior point
Question feed