What is the smallest positive real $r\in\mathbb{R}$ with the following property?

First, it's easy to see that $r\geq \sqrt{2}$. The reason is that two squares of area 1/2 cannot fit in any smaller square.

This turns out to be sharp by a 1967 paper of Moon and Moser (see the discussion after Theorem 4 of "Some packing and covering theorems"). More generally, they show that any set of squares of total area $A$ (not even necessarily finite!) of which the largest has side $D$ can be packed into a square of side length $D+\sqrt{A-D^2}$.

They show this by giving a greedy algorithm for packing squares into a rectangle; first, one sorts the squares by size and then they start packing them into one row at the bottom of a square of side length $D+\sqrt{A-D^2}$. When the squares no longer fit in one row, one starts a second row above this one, and so on. Of course the key is proving some inequalities showing that this will always work. 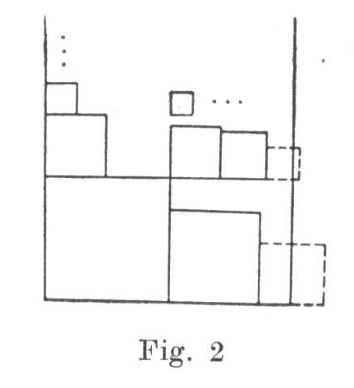 See also On packing of squares and cubes by Meir and Moser (1968) which gives a more explicit proof and discusses the generalization of this result to higher dimensions.

There are quite a few variants which are still open and being studied. Here are two examples:

The MO question Can we cover the unit square by these rectangles? discusses a variation of this square-packing problem where one has the infinite set of $\frac{1}{k}\times\frac{1}{k+1}$ rectangles (the paper of Meir and Moser discusses this too).

Finally, note that the algorithm of Moon and Moser requires knowing the set of squares in advance (since one must sort by their size). There has been some work on the "online" version of this problem where squares are given one at a time and must be packed before the next one is given. The best result seems to be in this 2014 paper of Brubacher, which gives an algorithm achieving $r\leq 5/2$.

Not the answer you're looking for? Browse other questions tagged real-analysis mg.metric-geometry plane-geometry or ask your own question.

74
Can we cover the unit square by these rectangles?

27
Is the ratio Perimeter/Area for a finite union of unit squares at most 4?
6
Denominators in the solution to Hilbert's XVII
5
cover and hide with squares
10
Could a perfect squared square be split into two perfect squared squares?
14
The Disco Ball Problem
10
Packing rectangles: Does rotation ever help?
5
On covering convex 2D regions with rectangles
5
Packing circles with radii 1, 2, 3, …, n in a rectangle
Question feed