Does knight behave like a king in his infinite odyssey?

The Knight's Tour is a well-known mathematical chess problem. There is an extensive amount of research concerning this question in two/higher dimensional finite boards. Here, I would like to tackle this problem on the unbounded infinite board, $\mathbb{Z}\times\mathbb{Z}$.

The first issue is how to construct a knight's tour on the infinite plane. An intuitive way is to build it locally by mimicking the king's spiral tour in $\mathbb{Z}\times\mathbb{Z}$ board as follows: 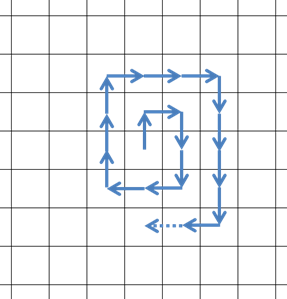 Roughly speaking, a knight may follow the king's pattern by completing a knight's tour on an $n\times n$ block and then moving to the next block in the spiral order. For instance, in the below picture each square represents a certain $n\times n$ part of the $\mathbb{Z}\times\mathbb{Z}$ plane and the blue path is a knight tour performed in that particular block. It is connected to a point in the neighbor blocks with a knight move. 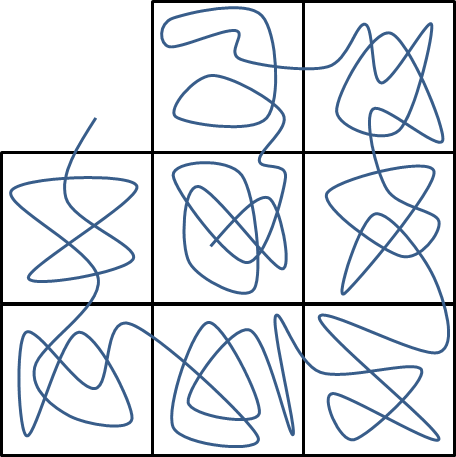 Of course, the existence of such a nice natural number $n$ should be checked. However, it sounds reasonable to expect that for a sufficiently large $n$ (which there are so many open knight tours with various beginning and ending points) there are some tours which can serve as the building blocks of the knight's king-like spiral. (Actually only a few straight and right-oriented $n\times n$ tours with appropriate beginning and ending points are needed. The other blocks will be redundant up to isomorphism).

Question 1. Is there (a concrete example of) a knight's tour on the infinite plane?

In the special case, does the already described strategy for building a knight's tour locally actually work? If yes, what is the minimum required $n$?

Assuming an affirmative answer to the above question, the next step is to speculate on the general structure of all possible knight tours on the infinite plane:

If no, what is an example of an infinite knight's tour which can't be seen as a combination of local knight's tours in a grid of finite blocks of the same size (no matter what the resolution of the gird is)? 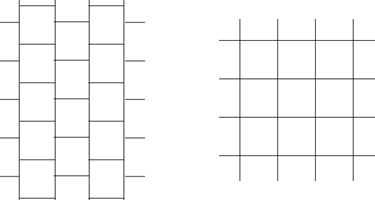 So, for the sake of completeness, one may reduce the grid partition condition in question 2 to merely a partition of the infinite plane into $n\times n$ blocks:

Question 3. What is the answer to question 2 if we merely consider partitions of the infinite plane into $n\times n$ blocks, rather than those partitions which arrange blocks in a perfect grid?

The question could be asked in a more general sense as well:

Update. Thanks to Joel's answer and Eric's counterexample, the questions 1 and 2-4 have been answered positively and negatively respectively. Thus, we know that there are open knight's tours of the unbounded infinite plane, $\mathbb{Z}\times\mathbb{Z}$, of different nature, namely those which are formed of local knight's tours of finite planes and those total tours which don't arise this way. In this sense the answer to the question in the title is: "Sometimes but not always!"

Consider the following open knight's tour on a $5\times 5$ board, starting at position $1$ and then touring the $5\times 5$ board in the indicated move order. The final position is $25$, from which the knight can exit at either $A$ or $B$.

So the tour starts at a corner, and can exit in either direction at an adjacent corner. By a suitable reflection of the same tour, we could also arrange to exit at C or D, if desired.

Therefore, with this pattern and its copies, we can proceed to tile any $5\times 5$ board and then arrange so as to enter any of the four adjacent $5\times 5$ boards on a corner as desired.

This allows us to tile any sequence of $5\times 5$ boards that are each connected to the next by a common edge. In particular, we can carry out your spiral pattern, since in that pattern each block has a common edge with the next block.

Thus, the answer is affirmative, there is a knight's tour of the infinite $\mathbb{Z}\times\mathbb{Z}$ chessboard.

Indeed, since this method allows one to follow any tiling of the plane by $5\times 5$ blocks, where each block is attached to a next block by an edge, it follows that there are continuum such knight's tours.

Questions 2, 3, and 4 are answered negatively by [W], which decomposes the plane into concentric annuli of width two.

OP observes that this construction is still spiral (every move after the first rotates the direction vector from the origin to the knight clockwise). However, note that the move to transition from one ring to the next could be made so as to reverse the direction of the spiral. Instead of ending an annulus by moving (1,-2), the knight could move (2,-1) and fill the next annulus moving always counterclockwise. (Of course, the king could double-back the same way in its spiral tour.)

I've pictured the start of a more-or-less random-5-by-5 Hamkins-variant infinite Knight's tour construction. It begins at the center and proceeds to the SE corner of the 25-by-25 board. 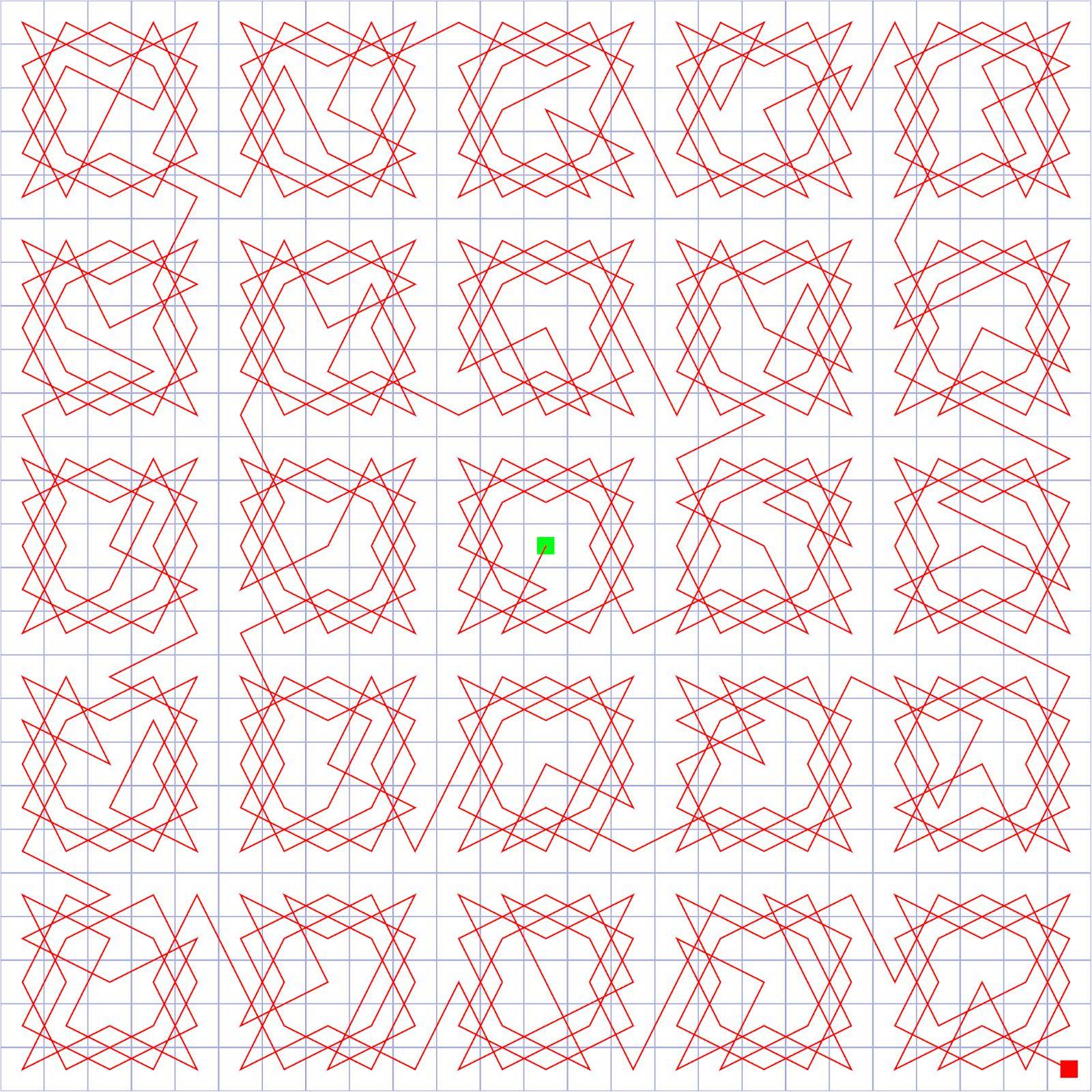 66
What is a chess piece mathematically?

5
Dimensions of Jordan blocks associated to representations
2
What are some interesting almost equitable partitions which are not equitable?
14
Finite vertex-transitive graphs that look like infinite vertex-transitive graphs
3
Generating uniquely $k$-optimal point sets
66
What is a chess piece mathematically?
9
The Sudoku game: Solver-Spoiler variation
4
Showing this formula counts these things
6
A combinatorics problem and the probability interpretation
1
Maximum number of colors for an optimal tiling which guarantees infinite paths
Question feed