Given a partition of an integer $N$, its $P$-graph is the graph whose vertices are its parts, two of which are joined by an edge if and only if they have a common divisor greater than one (i.e. they are not relatively prime).

Assume we have a partition with this $P$-graph. This graph has an odd number of vertices, so there are an odd number of parts in the partition, so the number of even parts of the partition must be odd. As the largest clique in this graph is a triangle, $2$ either doesn't appear as a connecting prime, or it appears as a triangle. In the former case, a version of the AM-GM argument below shows the total would be too large. As such, $2$ must be one of the triangles in the $4$-wheel.

Similar reasoning puts $23$ on the other side of the $2$, and $3$ across. The filling of the $6$-cycle goes similarly. A generalization of this argument should show that the minimal sum of products from cycles comes from putting together $4$-cycles, with one "extra" cycle; these get filled in sequentially, starting with the most extreme to the least extreme. I don't think there is necessarily any restriction on where the "extra" cycle goes in the sequence, though.

Along with @BrianHopkins modified $11$-graph, I think we've likely reached as small as we can get. Here's why:

The most effective technique so far seems to be to find some graph that has a minimum total near $1000$ (possibly using a parity criterion), and then adding to it to get to $1000$ exactly. It is possible to get a (slightly low) estimate for this total using the AM-GM inequality:

Let $k$ be the number of vertices in the "initial graph", and let $n$ be the minimum number of connecting primes in that graph. The product of all of the numbers at the vertices (the elements of the partition) is then at least the square of the product of those primes. The geometric mean is then the $k$th root of that square; the arithmetic mean must be at least as large, so the total is at least

This estimate is usually pretty good (low by ~50), as long as the cliques for each prime don't get too large (which may be the next avenue to check). We therefore want to know for which $n,k$ this is near, but below, $1000$.

So if there is a smaller solution, my guess is that it will require some newer, slicker technique.

I did find a modification of this technique that may be useful: adding "tails" to graphs can make the minimum total higher, effectively by forcing larger differences between vertices. This modifies the above formula by allowing one of the prime factors to only appear once, rather than twice.

A graph that might be helpful: take a $6$-cycle and add a lengh $2$ "tail" at one vertex. If the $8$ connecting primes are odd, I think the minimum is $964$. I think it may be possible to get a $9$-graph with this, though adding an isolated point doesn't work.

The "theta-hexagon" with a single tail seems possible; the minimum I got was $911$.

The odd-only two-tailed pentagon can get $939$.

Proof: Take a partition with this graph. Because the number of vertices is odd, the number of even elements of the partition must be odd. $2$ correspondingly can only appear in edges that are parts of triangles - so it is a "connecting prime" in the complete $4$-graph, or not at all. Most importantly, it doesn't appear in the $8$-cycle.

Consider a cycle of length greater than 3. If we label the edges of this P-graph by the gcd's, then a vertex on this cycle between two labels a and b must be a multiple of ab, and a and b are coprime. Thus all the labels are pairwise coprime and greater than 1, so the smallest k many such labels can be no smaller than the smallest k primes.

Bernardo, I enjoyed hearing about these at G4G13 and was pleased to find several related threads here. Thanks for all these nice questions.

Freddy Barrera has shown that $k(1000)>5$ by verifying that every graph with fewer than 6 vertices (other than the singleton) is the P-graph of at least two partitions of 1000. On the other hand, from the following graph on 35 vertices a unique partition of 1000 can be recovered, hence $k(1000)<36$. 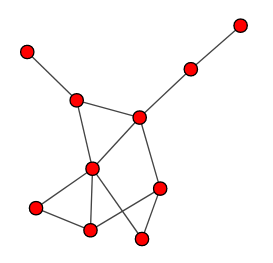 @user44191 Based on your "cycles and tails" idea Freddy Barrera devised and checked by exhaustive computer search that from the following P-graph a unique partition of 1000 in nine parts can be recovered: 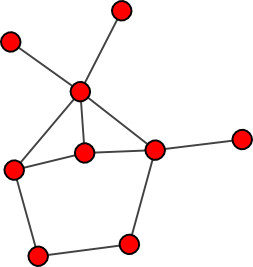 0
Graphs determined by sets of consecutive integers
16
A labelling of the vertices of the Petersen graph with integers
9
Finding the largest number which cannot be the sum of the labels of the Petersen graph
2
Are there graphs for which infinitely many numbers cannot be the sum of the labels of its vertices?
5
Least (and largest) possible number of non-relatively prime pairs among consecutive integers
6
Ramsey's number R(4,4) with arithmetic progressions
11
Is the divisibility graph of the proper divisors of n more often planar than not?
Question feed