Work of ICM 2010 plenary speakers (and other humans) [closed]

Ask Question
Asked 10 years, 10 months ago
Active 3 years, 10 months ago
Viewed 9k times
38
$\begingroup$
This question is unlikely to help any future visitors; it is only relevant to a small geographic area, a specific moment in time, or an extraordinarily narrow situation that is not generally applicable to the worldwide audience of the internet. For help making this question more broadly applicable, visit the help center.
Closed 9 years ago.

The ICM is approaching. It would be nice for everybody who feels qualified to give a brief overview of the work of one of the plenary speakers. If anything, this would serve to make all of us a little more cultured. On that same note - I would be especially interested in getting to know more about the work of anybody who has been invited to speak in more than one section. (For one thing, the probability of understanding some of the work of any person satisfying that property might be higher than the mean.)

(There could be some real-life follow-up on this on the part of those of us who are going to be in India in August. Perhaps we could organise some very informal seminars?)

Although there is no way to do justice in a single paragraph, I'll try to say a few words about Claire Voisin. She works primarily in Hodge theory, which can be loosely defined as the nexus where algebraic geometry, complex differential geometry and topology come together (with stress on the first). Aside from raw technical ability, I'd say her real strength is her uncanny ability to find just the right example. One of her most famous is the negative solution to the so called Kodaira problem. From a differential geometric point of view, projective algebraic manifolds are special because they admit Kaehler metrics. It is easy to see that the class of compact Kaehler manifolds is strictly larger than than class of projective manifolds using tori for instance. However, as a consequence of his work on classification in the 1960's, Kodaira showed that any compact Kaehler surface deforms (and is therefore homotopy equivalent) to an algebraic surface. The problem was whether this is true in higher dimensions. In 2004, Voisin gave a counterexample to this, namely she showed that there exists a compact Kaehler manifold which is not homotopic to a projective manifold. The construction is both simple and brilliant.

This is not really an answer, but too long to fit in comments. Some plenary speakers appear to have interesting informal descriptions of their work on their webpage for the non-specialist (or on some prize acceptance paper); also I've added their broad area between brackets (feel free to edit and add more).

Irit Dinur is probably best known for her new proof of the PCP theorem, one of the deepest results in computational complexity theory. "PCP" stands for "probabilistically checkable proof." To explain what the PCP theorem is, begin by noting that NP is the class of problems with short certificates. If a graph is Hamiltonian, I can certify this fact by showing you a Hamiltonian cycle. Checking the certificate, however, requires you to look at the entire certificate. The gist of the PCP theorem is that by using a very cleverly constructed certificate, you can verify the Hamiltonicity of a graph with high probability by making only a constant number of random probes into the certificate. This surprising result has many ramifications, including showing that some well-known NP-hard optimization problems are NP-hard even to approximate. The original proof of the PCP theorem was quite intricate. Dinur's amazing new proof gives new insights into the PCP theorem and has allowed sharper results to be proved. See this paper for a nice exposition.

Just a small comment on Artur Avila's contribution to spectral theory: One part of it (joint with Svetlana Jitomirskaya) was to show that the Hofstadter butterlfy 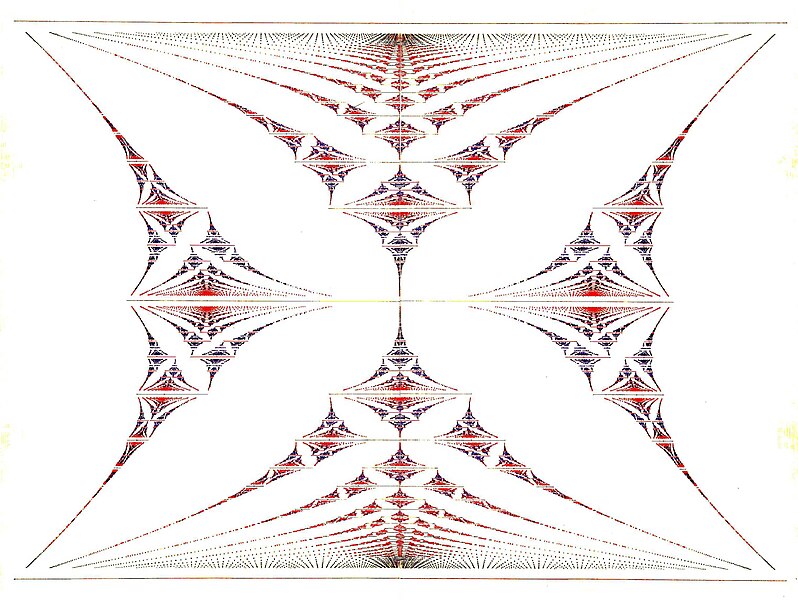 actually has the Cantor type structure that one sees. This was the famous Ten Martini Problem.

Disclaimer: The above is an oversimplication. That the set shown in the picture is a Cantor set is due to Last in the mid nineties, but the theorem by Avila--Jitomriskaya states that the same is true for a large set of parameters.

Second Disclaimer: This is just a small (but important) part of Avila's contribution to mathematics.

The picture is taken from http://en.wikipedia.org/wiki/Hofstadter%27s_butterfly

More recently, and I suspect largely why he is giving a plenary lecture at the ICM, he and Simon Brendle proved that $1/4$-pinched Riemannian manifolds are space forms. If the manifold is simply-connected, then previous sphere theorems imply that $1/4$-pinched manifolds are homeomorphic to spheres (Berger, Klingenberg). However, there are spheres which are homeomorphic but not diffeomorphic to the $n$-sphere (Milnor), so the question was left open as to whether these manifolds are diffeomorphic to the $n$-sphere. This is the question that Brendle and Schoen resolved, using Ricci flow.

Raman Parimala is an algebraist and algebraic geometer. She studies problems related to the existence of rational points on algebraic varieties over various fields (both "dimension one" : local and global, and "higher dimensional" fields, like function fields of curves over local fields, etc.), in particular varieties associated to algebraic groups : quadrics, Severi-Brauer varieties, varieties linked to algebras with involutions... The methods include Galois cohomology, K-theory, unramified cohomology on the one hand and the classical algebraic theory of quadratic forms on the other.

As a personal note, I would say this is the area of algebraic geometry which is most satisfying from the point of view of sophisticated cohomological/K-theoretic tools (including the whole machinery developped in the wake of Morel-Voevodesky's $\mathbb{A}^1$-homotopy theory) because one can make a lot of computations of otherwise intractable invariants.

A few of her important results (some with said collaborators):

She gave a lecture in the Suslin birthday conference in Saint Petersburg in july : see the end of the following webpage, which hosts videos of all the talks :

There are people on MO who know more about Hugh Woodin's work than I do, but here is a first draft.

Woodin was one the main contributors, along with Martin and Steele, to the program of reconciling the axiom of choice (AC) as far as possible with the axiom of determinacy (AD). It has been known since the 1920s that, if AC holds, then not every set $S$ of real numbers is determinate. On the positive side, Martin proved in ZFC that all Borel sets are determinate, and that analytic sets are determinate assuming the existence of a measurable cardinal. The climax of this line of research, in the late 1980s, is that determinacy of all projective sets is equiconsistent with a stronger large cardinal hypothesis -- the existence of infinitely many Woodin cardinals.

After this, Woodin mounted a very complex and serious attack on the continuum problem. He summarized his program (which he believes will show that $2^{\aleph_0}=\aleph_2$) in a pair of articles in the Notices in 2001.

In September 2007 I heard Woodin give a talk at a memorial conference for Paul Cohen at Stanford. He described Cohen's discovery of forcing as "either the end of set theory, or else really the beginning, and we do not yet know which." (He illustrated this remark with NASA photo of Mars, in which the sun appears to rise or set, but one cannot tell which.)

I think it will be interesting to hear what he has to say in Hyderabad.

Of these speakers, the one whose work is probably easiest to describe is Kim Plofker. She is a historian of Indian mathematics -- probably the most knowledgeable in the West -- and a very readable introduction to her work is in her book Mathematics in India, Princeton University Press, Princeton, NJ, 2009.

My information may not be the most up to date, but I'll write a few things about Jean-Yves Welschinger. He works in real algebraic geometry and symplectic geometry; he might be best known for the Welschinger invariants which are analogues of genus zero Gromov-Witten invariants for real 4-folds. The invariant counts real rational pseudo-holomorphic curves in a fixed homology class through a generic point configuration, with an appropriate signed weight (based on the number of real isolated nodes). The value is independent of the choice of a generic real almost complex structure, and gives nontrivial lower bounds for curve counting.

Here's a list of people in more than one section (in order of appearance...):

a. Jaroslav Nesetril [1. Logic and 14. Combinatorics]

i. Alexei Borodin [12. Mathematical physics and 13. Probability and statistics]

R. Balasubramanian is an expert in the field of analytic number theory, especially the theory of the Riemann Zeta function. He, along with his colleagues, is well known for solving the Waring's problem for the 4th power i.e. $g(4)=19$. More about his works and publications can be found here:

Not the answer you're looking for? Browse other questions tagged soft-question big-list icm-2010 or ask your own question.