Does there necessarily exist an equivalence relation $\thicksim$ on $X$ such that $\pi_1(X/\thicksim)$ is isomorphic to $\pi_1(X)/N$?

This is not always possible. (This answer was worked out in collaboration with Raymond Cheng.) 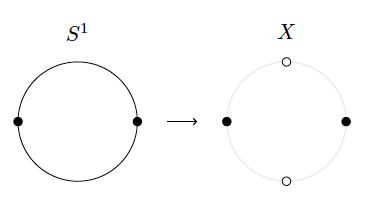 It is a four-point topological space with two closed points and two open points, and it is weakly homotopy equivalent to $S^1$. In particular, $\pi_1(X) = \mathbb Z$.

On the other hand, there are only finitely many possible quotients $X/{\sim}$, and therefore not every group $\mathbb Z/n\mathbb Z$ can occur as the fundamental group of $X/{\sim}$. $\square$

Remark. We can actually go through all possible quotients. If $\sim$ is a nontrivial equivalence relation, then $X/{\sim}$ is connected and has fewer than $4$ points. In fact, it is always contractible:

¹For example, consider the 'pseudo-closed-interval' $Y$:

Not exactly an answer to your question, but it might be interesting anyway. Suppose your space $X$ is nice enough (path connected, locally path connected, semi-locally simply connected). Then under the Galois correspondence, the normal subgroup $N \triangleleft \pi_1(X)$ corresponds to a path-connected cover $p : Y \to X$ such that $\pi_1(Y) = N$ and $p_* : \pi_1(Y) \to \pi_1(X)$ is the inclusion.