Density of a saturated random packing of congruent circles

The problem of the expected density of a saturated random packing of unit circles in the plane can be described as follows.

In a circular region $C$ of a large radius pick a point at random and draw a unit circle centered at the chosen point. Then pick another point in $C$ at random and draw again a unit circle, centered at the chosen point. If this circle overlaps with the previously drawn one, discard it and pick another point in $C$. Continue this process until the probability of finding one more point in $C$ for which the unit circle drawn about it does not overlap with any of the previously drawn circles is zero. The density of such packing of unit circles in $C$ is computed as the sum of the areas of the unit circles divided by the area of $C$. Let $d(C)$ denote the expected value of the density, and let $d$ denote the limit of $d(C)$ as the radius of $C$ tends to infinity.

Numerical experiments indicate that $d$ should be around $0.82$ (see for example https://www.sciencedirect.com/science/article/pii/0021979771903389), but, to the best of my knowledge, the exact value of $d$ is unknown. Are there any rigorous results obtained in this direction? Any reasonably good estimates, perhaps? Any references will be appreciated.

This 1997 paper of Caser and Hilhorst give series expansions which lead to rigorous lower bounds for $d$; it seems the best they can do in the case you're interested in was $d>0.328$ (see Eq. 3.21).

(My answer that I linked in the comments above gives links to reviews in the physics literature which contain some discussion of estimates of $d$; I'll just reproduce the estimate $d\approx0.5472\pm0.002$ according to simulations described here).

Following user @j.c.'s lead, here is another paper on RSA (Random Sequential Adsorption), which concludes with a density of $0.77$. From the abstract: 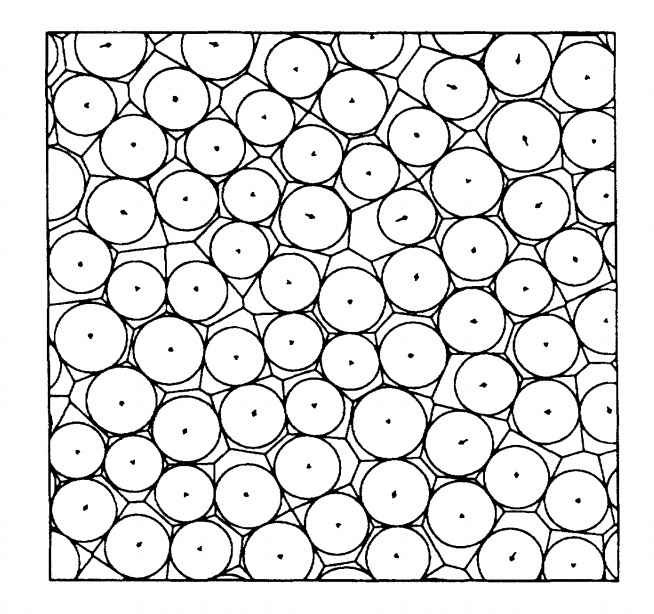 6
Packing density of randomly deposited circles on a plane

18
A circle packing conjecture
6
Packing density of randomly deposited circles on a plane
4
Is there an “accepted” jamming limit for hard spheres placed in the unit cube by random sequential adsorption?
4
Blowing up spheres in a face centered cubic (fcc) packing geometry just enough to cover the volume of the lattice
6
Isotropy of Apollonian disk-packing
17
Packing disks on a cone, or: Garlands on a tree
2
Name and Algorithms for a Sparsest Circle Packing
8
Random reflections unexpectedly produce banded distributions
Question feed