Is there a mathematical and information theoretic explanation for this cube packing phenomenon?

I saw this unintuitive result on dice packing:

A jumble of thousands of cubic dice, agitated by an oscillating rotation, can rapidly become completely ordered, a result that is hard to produce with more conventional shaking.

The paper is not very rigorous.

Can the presence of centripetal force in oscillating rotation help explain the phenomenon?

Update: Why does entropy seemingly reduce? Is there information theoretic explanation?

Is there a minimum and maximum volume below and beyond respectively of both the cylinder and the dice which the phenomenon fails?

How about radius of the cylinder having an effect and the mass of individual dice?

Note the complexity remains the same. One is simply explainable as random and the other has total order explainable succinctly. But crucially they go through an intermediate transition phase of very high complexity. But unlike the example in https://www.scottaaronson.com/blog/?p=762 the entropy reduces and s something non-intuitive is happening. I do not think there is any elementary explanation. The example in the link of mixing coffee produces high entropy coffee no matter how you stir (slow or fast with or without rotation but there might be a totally non-intuitive way to mix coffee and lower entropy). 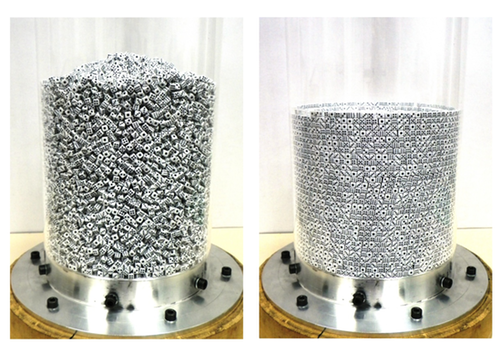 • Concerning question 2, you might want to take a look at Simulation of cubical particle packing under mechanical vibration (2016). The precise effect mentioned in the 2017 paper is not considered in that study, but a variety of ordering mechanisms are examined.

• Concerning question 1, the complexity of this mechanical problem (in the sense of many competing mechanisms) does not lend itself to a clear-cut mathematical formulation; all progress I am aware of is closely tied to either experiments or computer simulations of the ordering process.

All of this is in contrast to the order-disorder transition in thermal equilibrium, which does lend itself to a purely mathematical treatment (given the Hamiltonian, calculate the partition function). Here we are far from equilibrium, and then there are too many competing effects for a compact and precise mathematical formulation.

• Concerning the question added in the 2019 update: Locally, entropy may decrease if it is balanced by an increase in entropy in the surroundings. In the experiment the ordering does not happen in the isolated system, it is driven by the externally induced mechanical vibration, which will produce the entropy needed to offset the entropy loss. This happens in any phase transition, think of placing a glass of water in the freezer.

Any explanation should include a mathematical description of the "before-shaking" and "after-shaking" configurations; this should include a rigorous definition as well as a proof of some of their basic properties.

The "after-shaking" configuration seems to be related to the usual close-packing of cubes, where the cubes are congruent to a configuration where their centers are on $\mathbb{Z}^3$. (Understanding how this relates to what is seen with the cylindrical boundary conditions seems hard though). The "before-shaking" configuration then seems to correspond to a "disordered jammed" packing of the cubes. So far as I know, the set of such packings is not understood mathematically (though I would be delighted to be proven wrong!).

Let me explain this a bit more. Let $\mathcal{C}_{N,L}$ be the configuration space of $N$ hard cubes in a periodic box of size $L\times L\times L$; this is a semialgebraic subset of the $6N$-dimensional space of all possible positions and orientations. One can discuss jamming of configurations in terms of the connected components of the family of these spaces as $L$ changes (see e.g. this old mathoverflow question on the configuration space of hard disks).

Even in the absence of proof, we still have some idea of what happens as one changes the density (an understanding at the level of physics, not mathematics). See for example my old answer here for references to experimental and simulation work on packed cubes and some more discussion about jamming.

We've run into all of these difficulties (even in the world of equilibrium statistical mechanics) and we haven't even discussed the real meat of the paper: the driven, dissipative dynamics of these hard cubes in the presence of gravity and curved boundary conditions and friction!

P.S. I doubt this was your intention, but saying without any qualification that an experimental paper "is not very rigorous" would ordinarily be interpreted as saying that the design of the experiments or the way they were carried out was sloppy. That is not my understanding from reading the paper.

The physical reason is that the cubically packed state has lower gravitational potential energy than the jammed random state. The overall process is analogous to annealing, although the reduction in energy in the latter case is to do with atomic bonding, not gravity.

For the process to work, it is necessary for the jostling to be enough to ease the elements (dice in this case) out of their unstable or metastable positions so that they can fall into stable lower-energy aligned positions, but not so violent that they are thrown back out of these lower positions.

The cubically packed state is obviously of maximum density; so the centre of gravity is the lowest among all possible configurations.

One aspect, that has not been addressed in the answers, is the influence of the container geometry. In the experiment, a cylindrical container has been subjected to two different kinds of motions: a coaxial rotation with alternating directions and tapping to the side of side of the cylinder, which can also be interpreted as a horizontal motion that keeps the axis upright.

Assume for a moment, that the experiment were carried out without the influence of gravity and the cubes at least a distance of $\epsilon$ apart. then,

So, in a nutshell the difference can be explained by the different magnitude of shockwaves that are generated with the different kinds of motions; that can easily be checked by replacing the cubes with water and measuring the deviation of the surface from equilibrium.

Further experimental investigations could check the effect of container geometry (elliptical or prismatic instead of cylindrical) or rotation aroung an axis off the center of symmetry.
But I am neither a physicist, nor do I have any background in statistical mechanics, so forgive me if my answer is nonsense.

Not the answer you're looking for? Browse other questions tagged mp.mathematical-physics it.information-theory applied-mathematics packing-and-covering stability or ask your own question.

2
mutual information and minimal communication required for generating correlation
3
Is this cube packing possible?
3
Information theoretic privacy and distance of probability measures!
3
Finding a short proof for a certain information theoretic inequality
5
Is there an information exchange in this game? (Bell's inequality)
1
How can one integrate over the unit cube, subject to certain (quantum-information-theoretic) constraints?
2
Simple non-asymptotic upper-bound for packing number of a hamming cube
Question feed