Let a dodecahedron sit on the plane, with one face's vertices on an origin-centered unit circle. Fix the orientation so that the edge whose indices are $(1,2)$ is horizontal. For any $p \in \mathbb{R}^2$, define the dodecahedral distance $dd(p)$ from $o=(0,0)$ to $p$ to be the fewest number of edge-rolls that will result in a face of the dodecahedron landing on top of $p$. Equivalently, imagine reflecting a regular pentagon over edges, as illustrated below: It takes $4$ rolls/reflections to cover $p=(5,\pi)$: 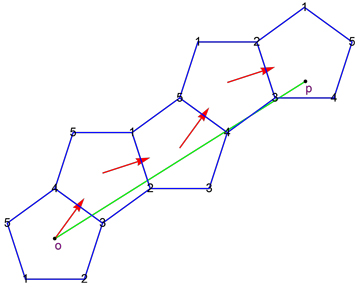 Greedily choosing, at each step, the roll that is best aligned with the vector $p-o$ does not always succeed.

Could one characterize the sequences of roll indices $s$, where rolling over edge $(i,i+1)$ of the pentagon is index $i\,$? These sequences feel analogous to continued-fraction approximations. What do all the points $p$ of $\mathbb{R}^2$ with $dd(p)=k$ look like, i.e., what is the shape of a $dd$-circle $C_k$?

That the dodecahedral distance is well-defined follows, e.g., from "Thinnest covering of the plane by regular pentagons."

Here are a few trivial lemmas. I won't use anything about the rolling motion, just that the distance is defined by gluing pentagons edge-to-edge: 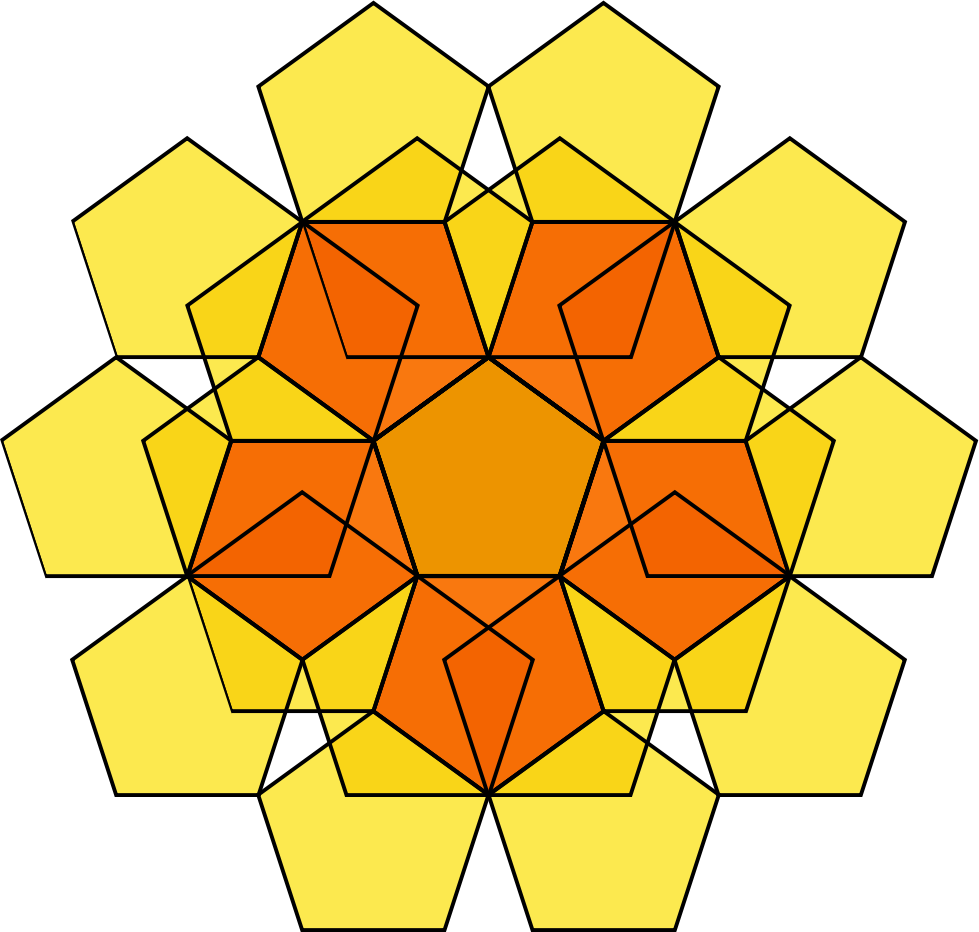 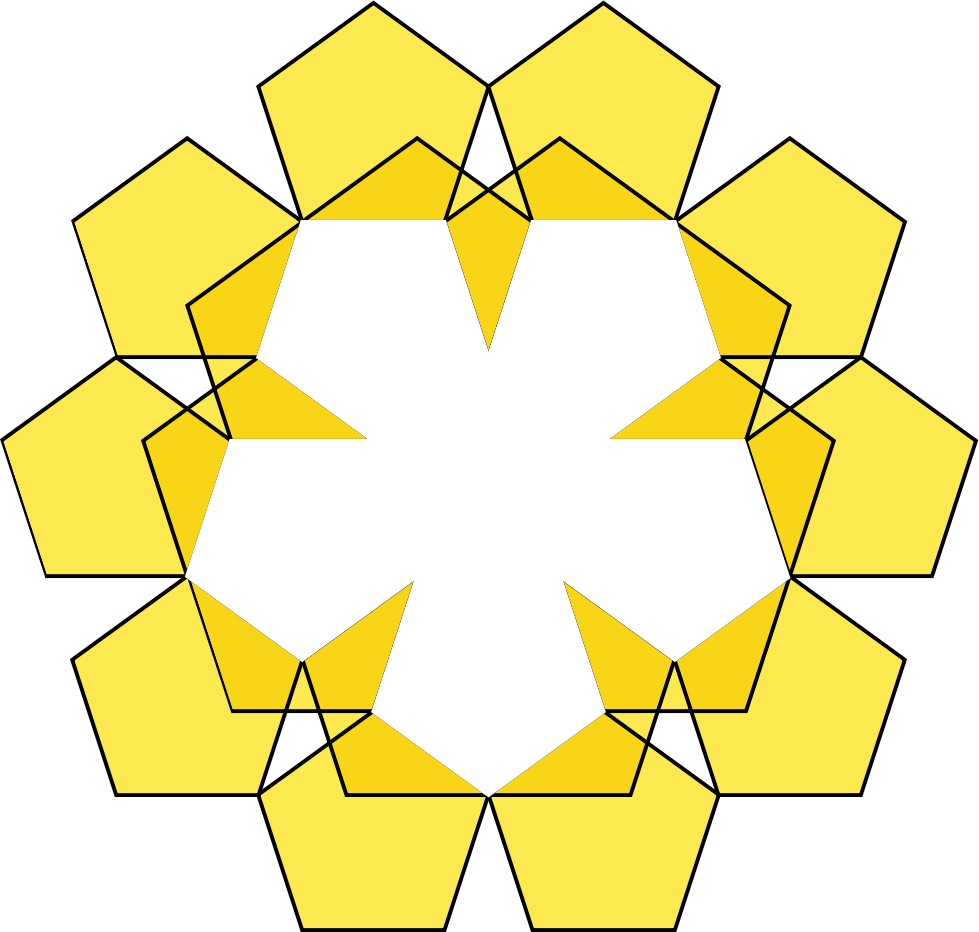 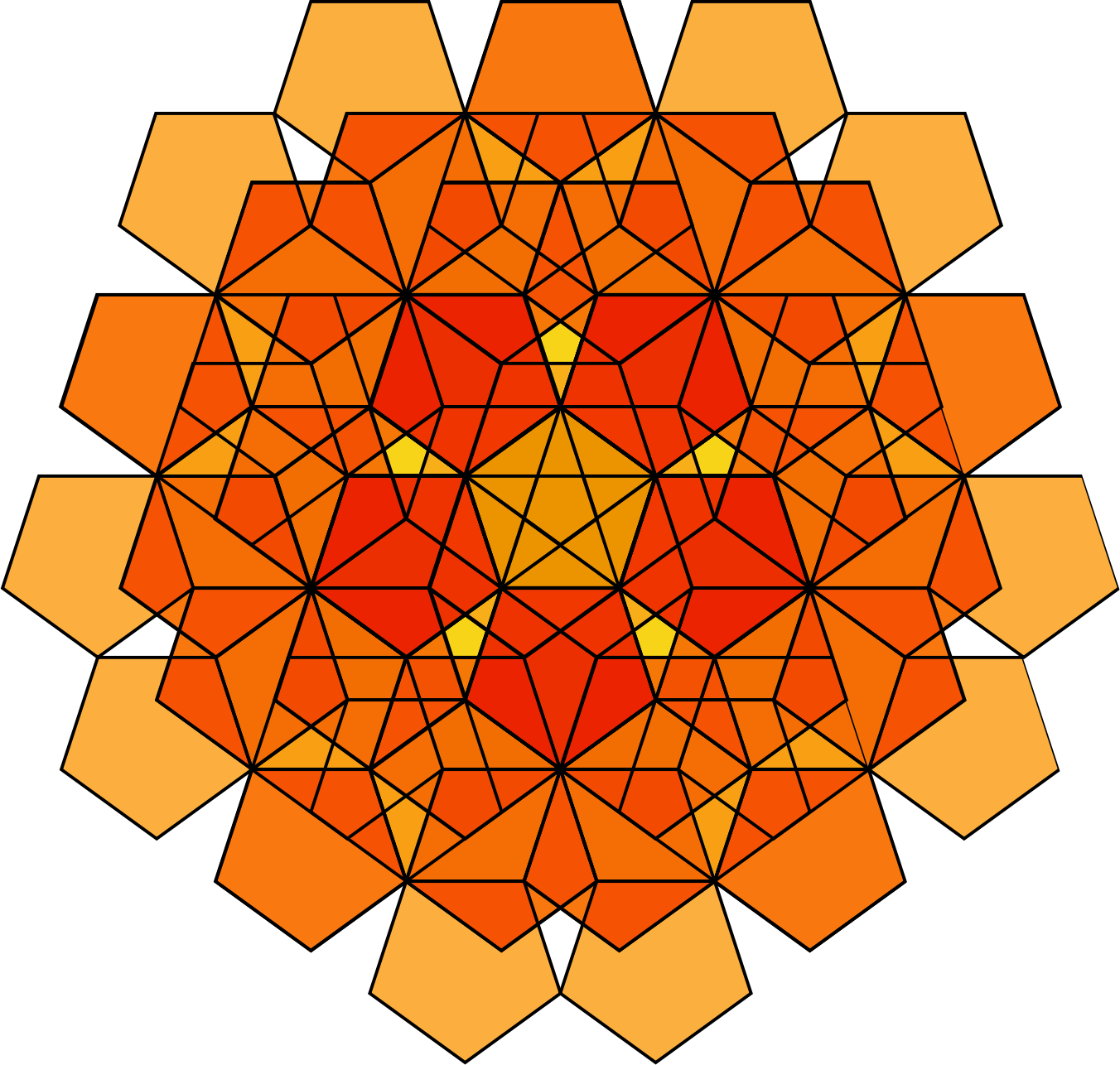 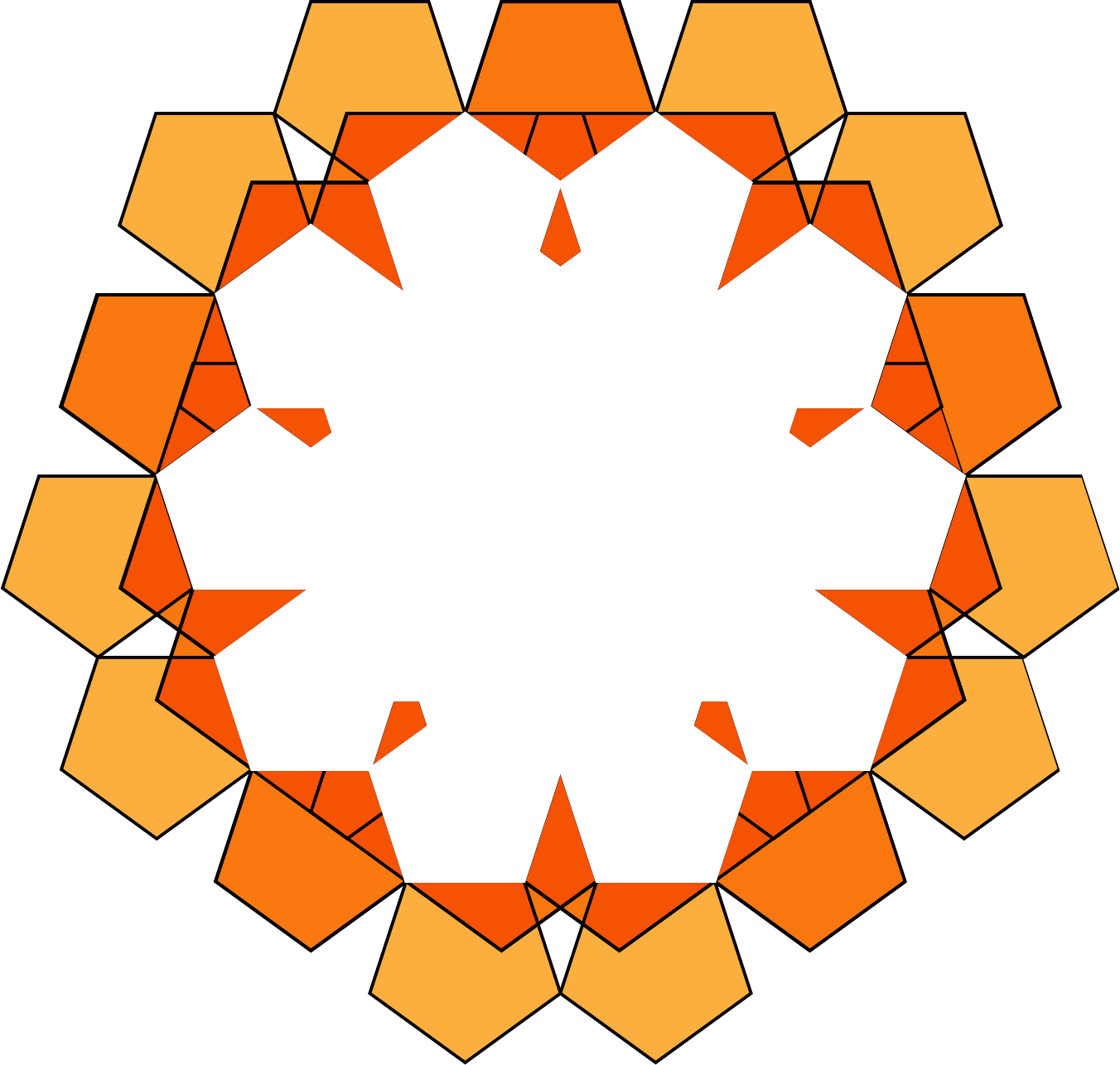 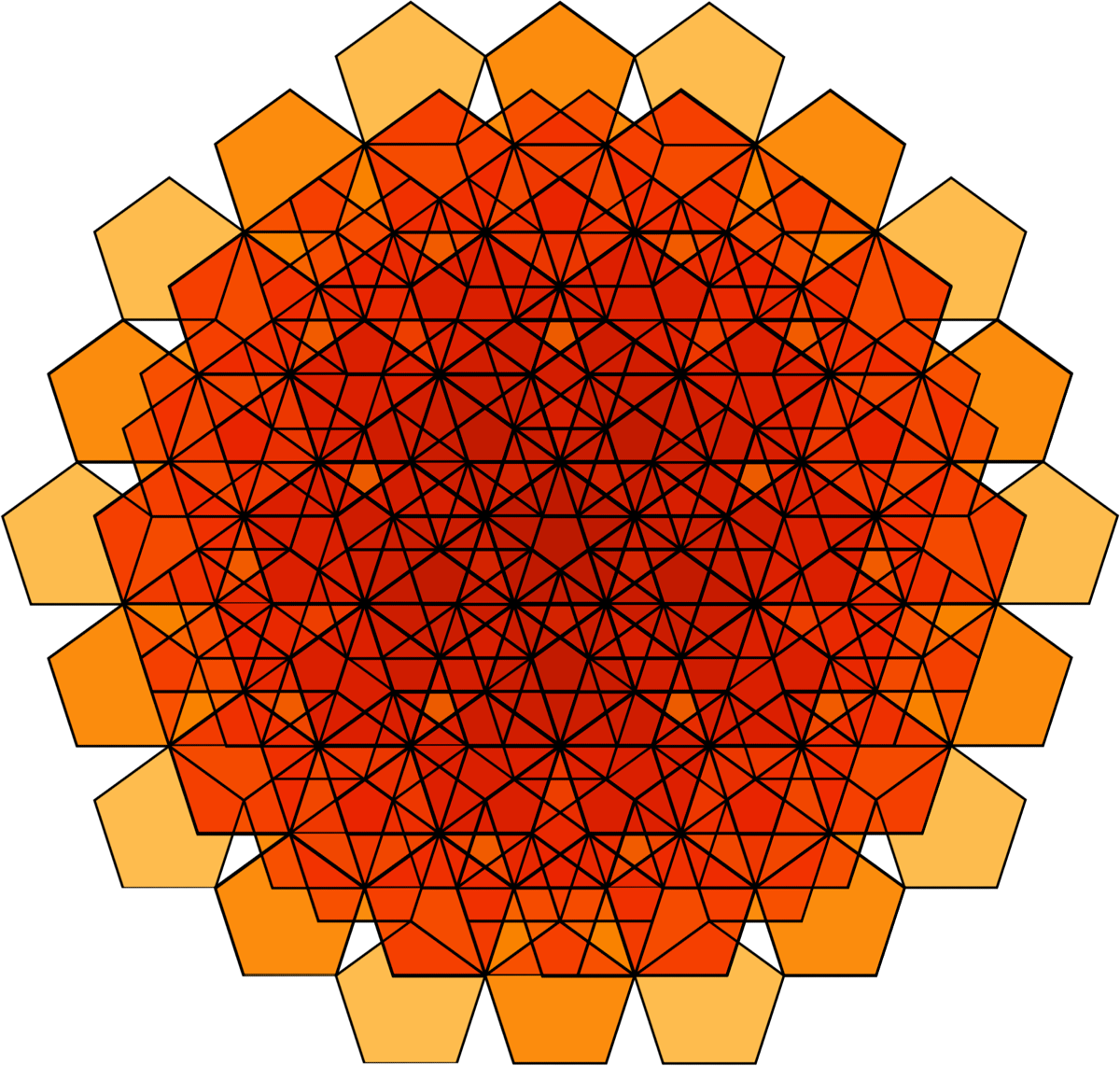 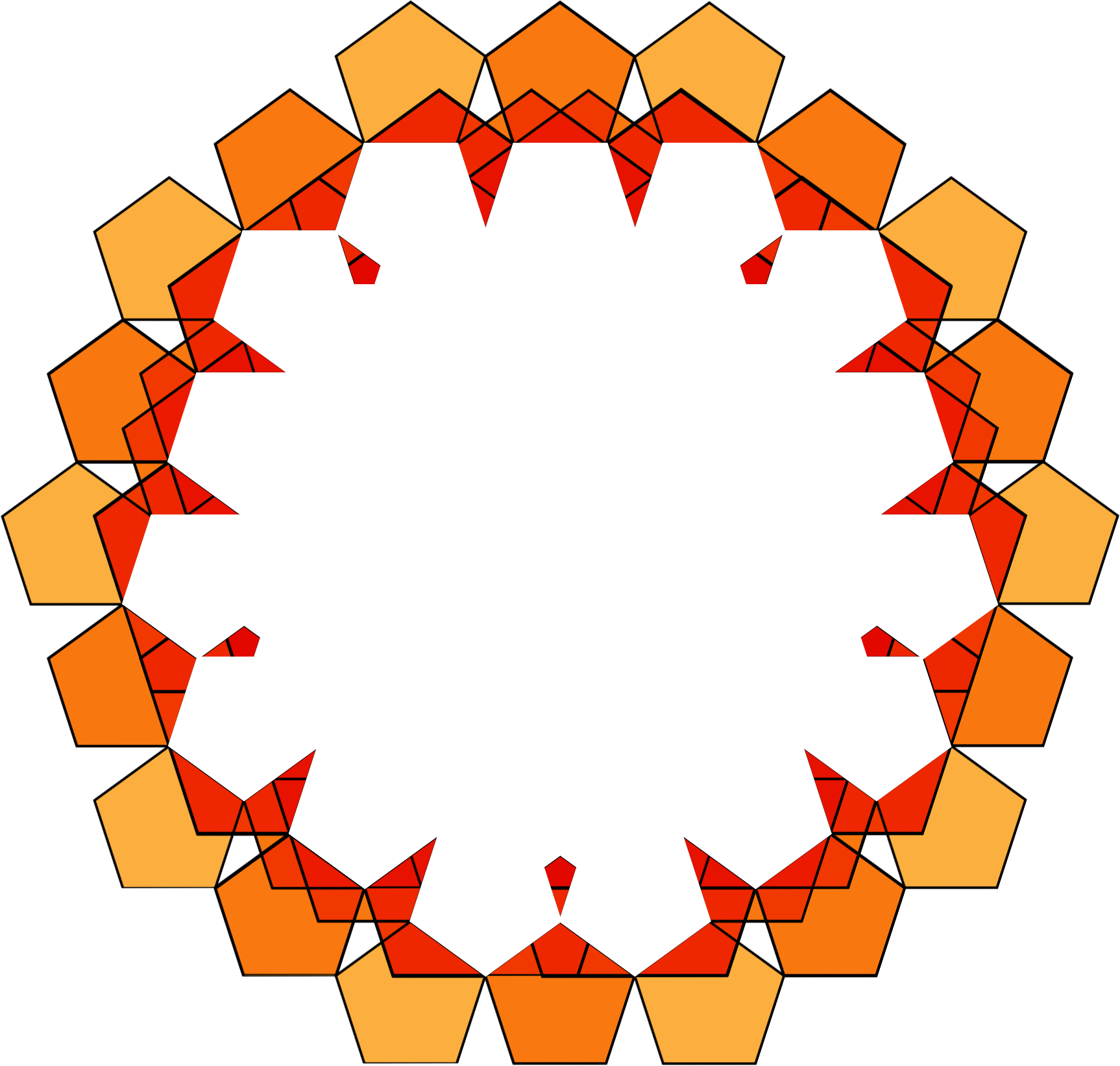 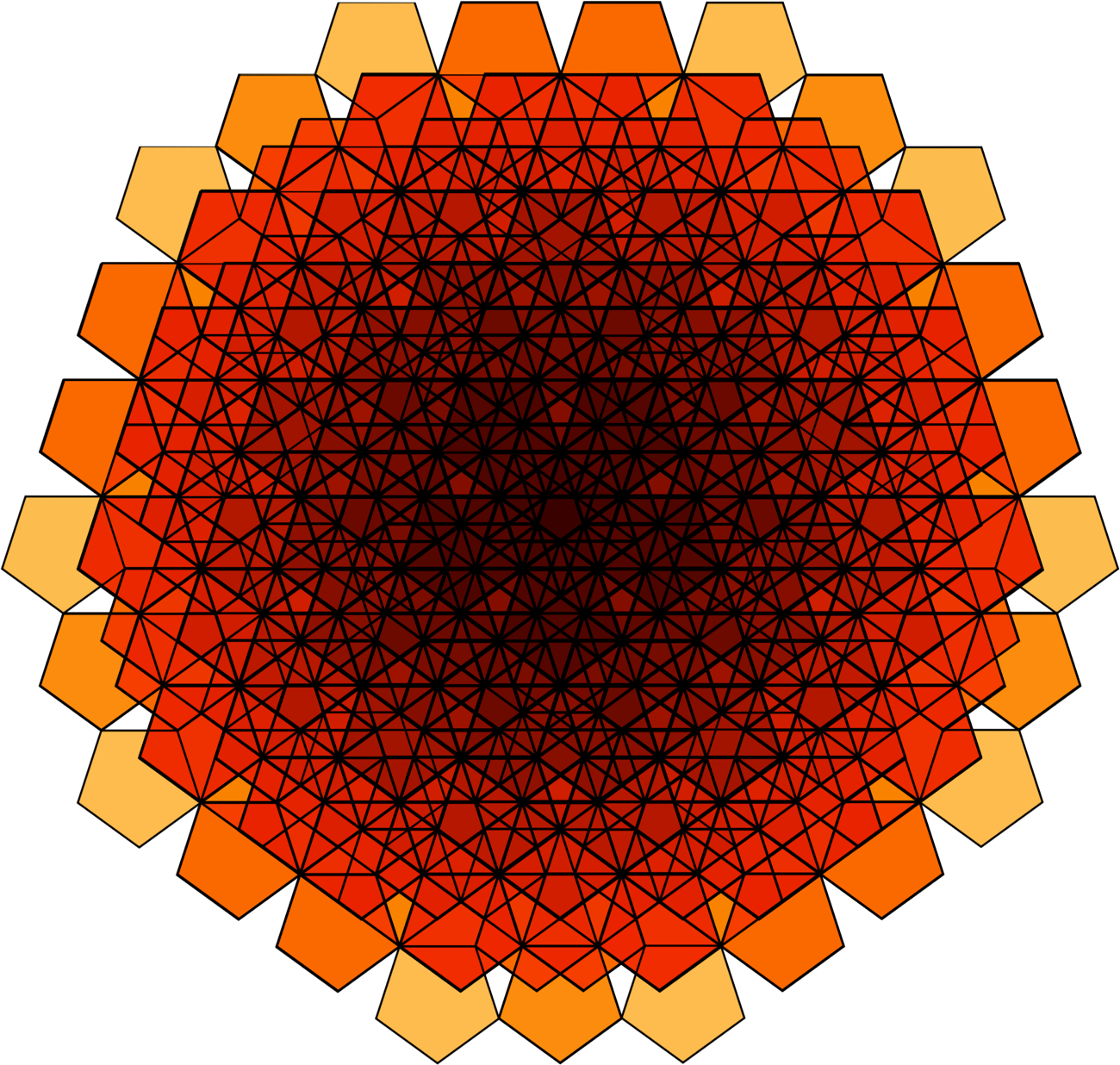 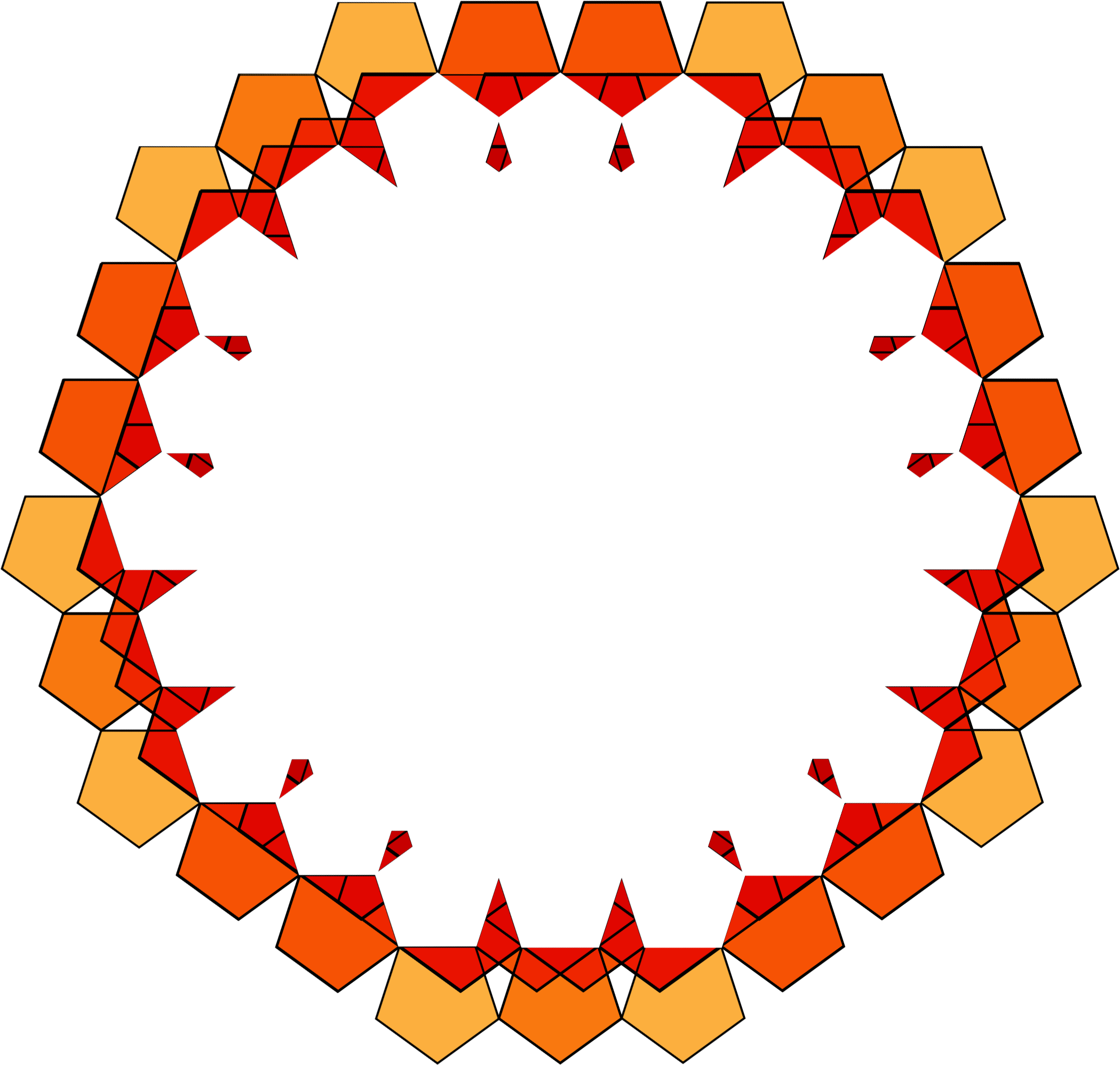 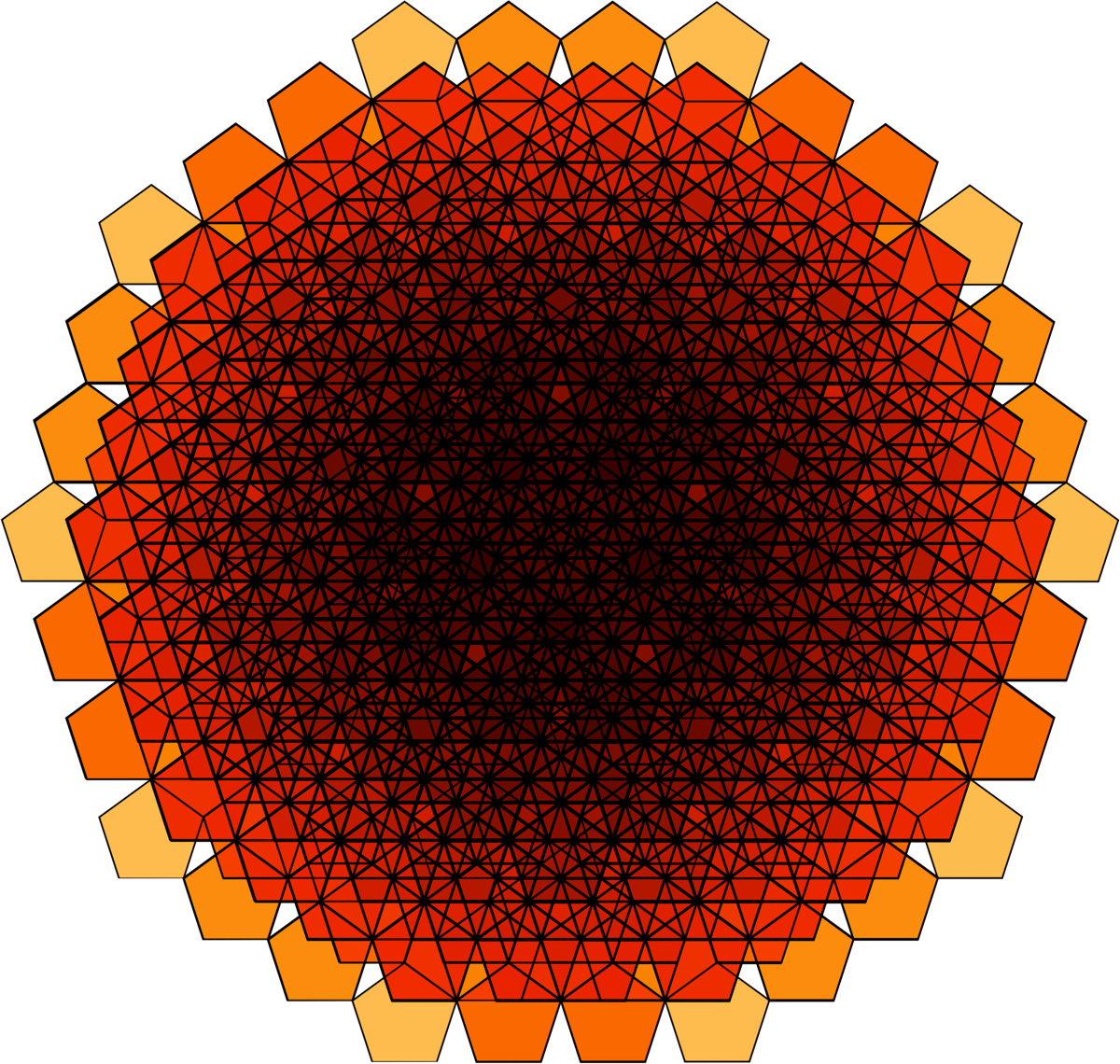 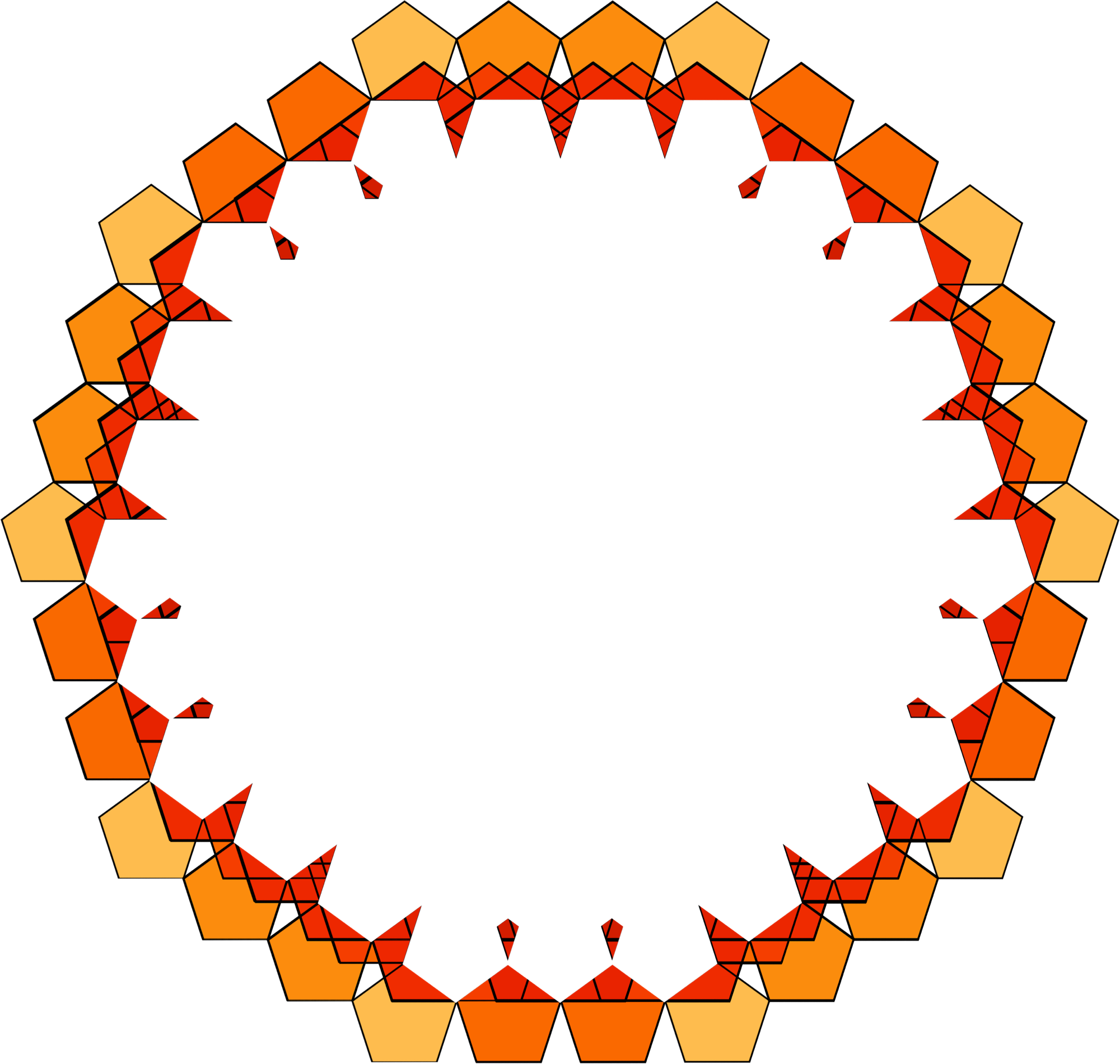 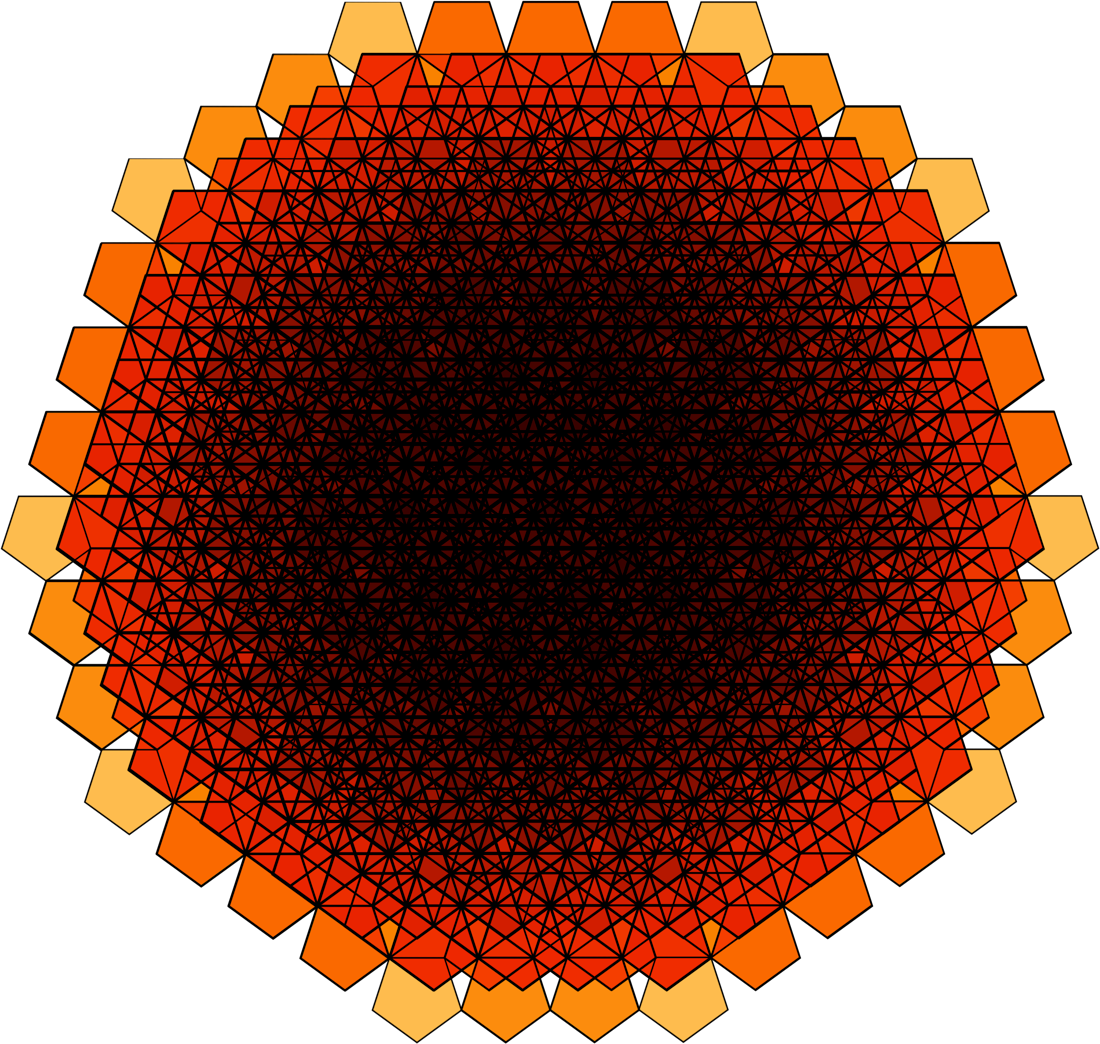 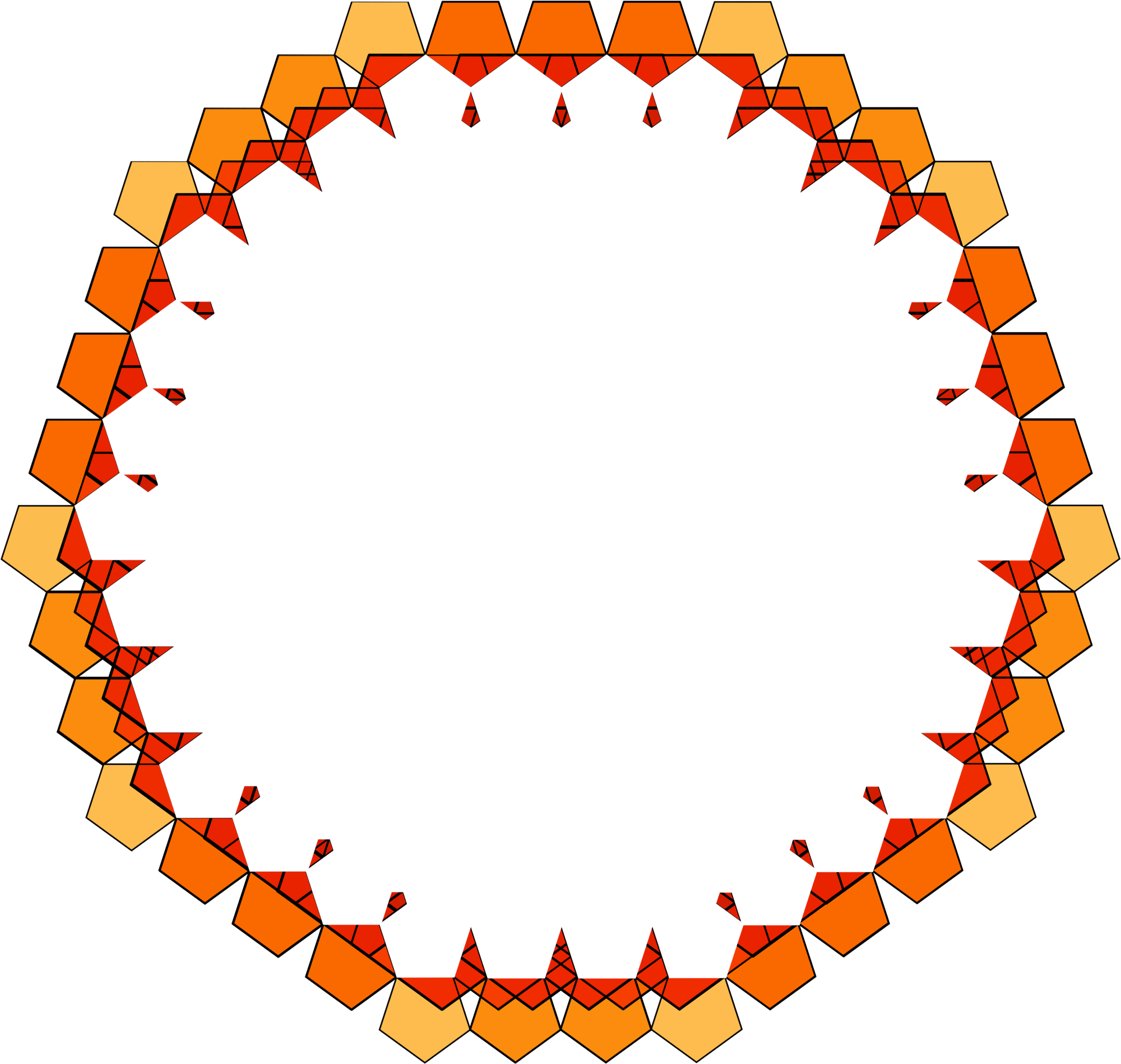 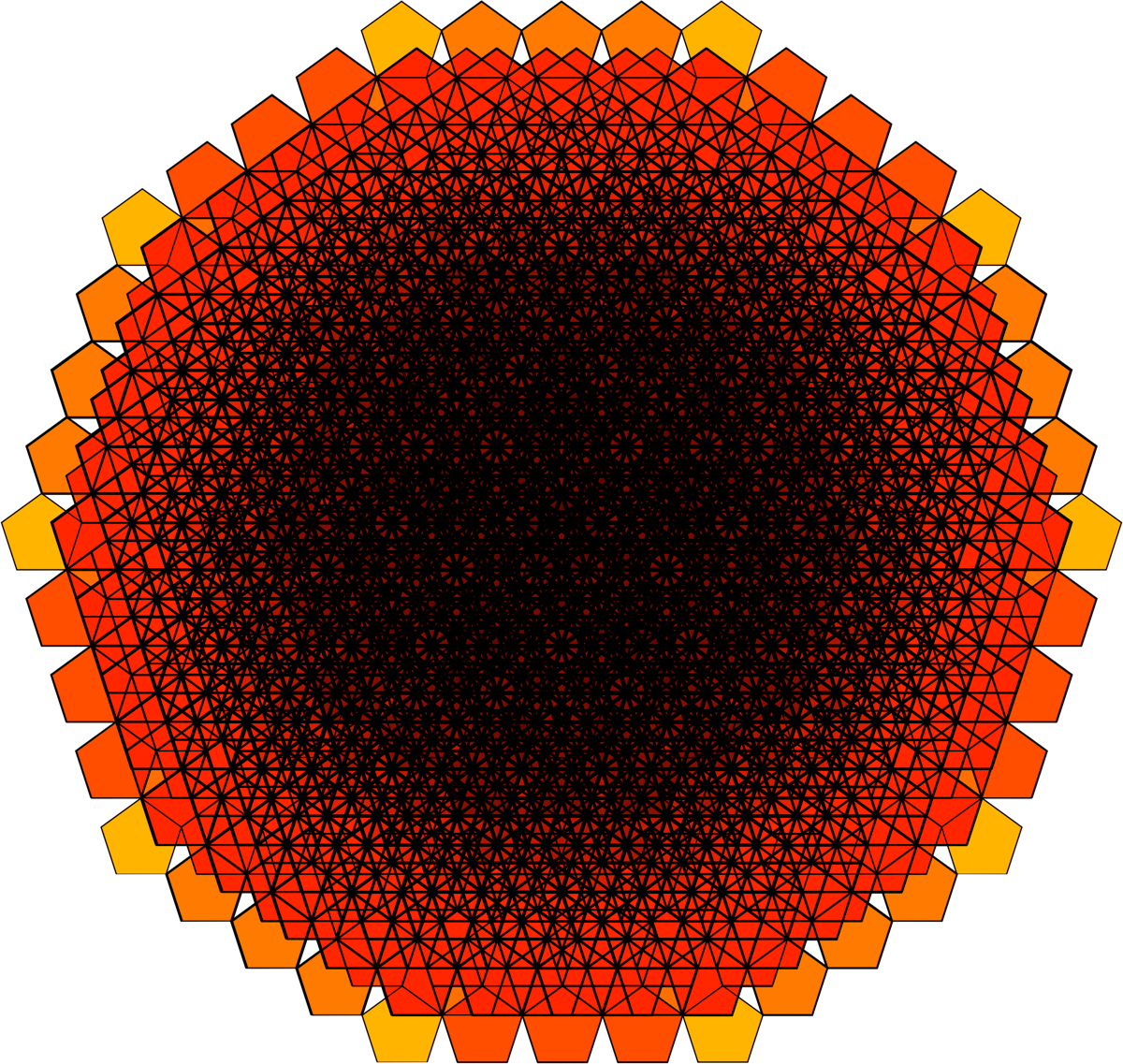 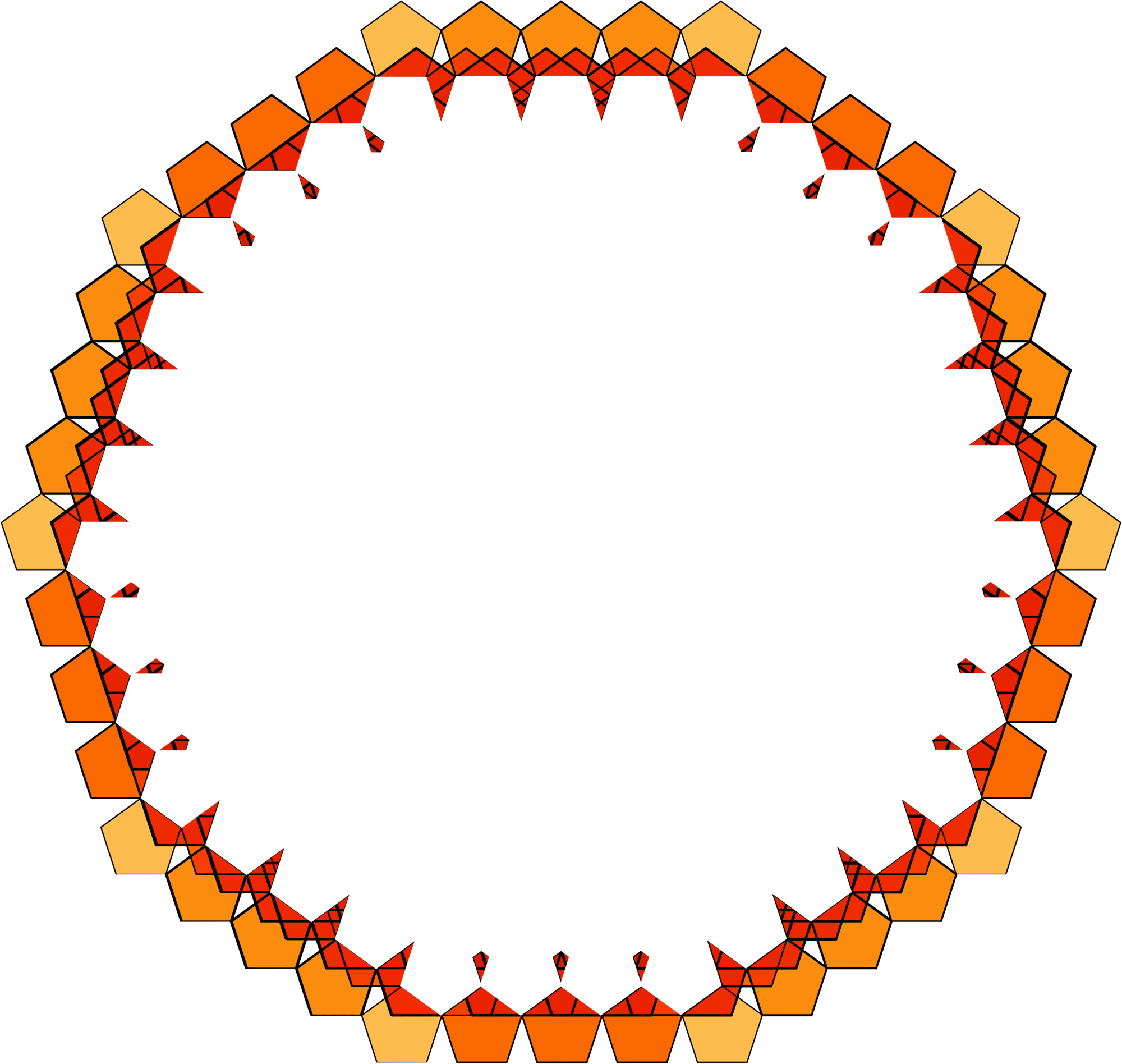 From these images, the following patterns are apparent: the "outer frontier" of $C_k$ is determined by a closed chain of $5k$ pentagons joined vertex to vertex. When $k$ is odd, these pentagons are all "down-pointing" and when $k$ is even they all are "up-pointing". From now on assume $k\geq2$. Then the pentagon chain is formed from 10 "segments of pentagons", which I'll call pentasegments, joining 10 corner pentagons where the pentasegments change direction.

There are two types of pentasegments: those where the bases of the constituent pentagons point outwards relative to the interior of $D_k$ (type I):

and those where the vertices of the pentagons point outwards (type II):

I think the above gives a full characterization of $C_k$ and also shouldn't be too hard to prove, though I'm finding it awkward to turn the pictures into words. First, the corners propagate along "zig-zag" paths of pentagons; for example, a formula for the coordinates in $\mathbb{C}$ of the centroid of one of the corners of $C_k$ is:

and there are 9 other similar formulas for the other corners. Another easy step is seeing that type I pentasegments turn into type II pentasegments (and vice versa) after attaching the next layer of pentagons, and seeing how the number of pentagons along each type of pentasegment changes is also straightforward. Maybe there's a more elegant description which might then lead to a simple formula / algorithm to compute $dd(p)$.

Here's some geometry which may help in writing an algorithm; as you can see, the details are straightforward but rather messy. If I haven't screwed up the law of cosines, the centroids of the corner pentagons of $C_k$ lie on the circle of radius $R_k$ centered at the origin, where:

The 10-gon $P_k$ formed by these centroids is inscribed in this circle and is determined once we calculate the polar angles of two neighboring centroids, $\alpha_k,\beta_k$. This can be done with the law of sines but I won't write out expressions explicitly here.

Let $S_k$ be the polygonal annulus lying strictly between $P_k$ and $P_{k+1}$. Given a point $p$, it will lie in some $S_k$ or on some $P_k$, and this tells us that $|dd(p)-k|\leq 1$. I don't know what the best algorithm for determining this $k$ is (something using the polar coordinates of $p$?), but I suspect Joseph O'Rourke will know. Once we get $k$, then it's possible to pin down $dd(p)$ exactly by analyzing in more detail where $p$ sits relative to the edges of $C_k$, though again I'm not sure what the most efficient algorithm would be.

Here are a few pictures and speculations to add to the the great ones from @j.c.

Here are the pentagons which arise from starting with the central green one and doing the reflections which do not overlap any previous ones. 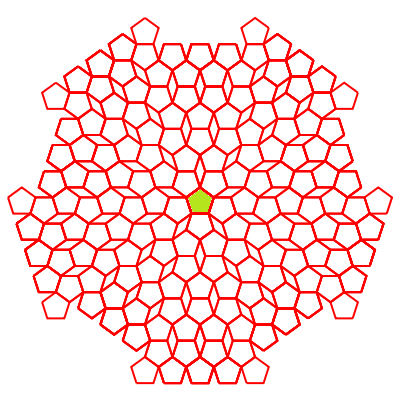 These are just the outer frontiers of the $C_i.$ (Specifically, this shows the frontiers for $i \le 7$ and half the frontier for $i=8$.) It seems clear (though I do not claim a proof) that for a target point inside one of the pentagons one does best to roll out to it using just these pentagons. For a target point in one of the rhombi one should roll out to a neighboring pentagon and at the last step reflect over a previously unused (for reflections) edge. One can use one of the bordering pentagons closest to the center for the closer half of the rhombus and a small part of the further half.

Here is a central portion of the same thing with lines connecting the centers of pentagons which share an edge. The resulting hexagons tile the plane with a $5$-fold rotational symmetry. 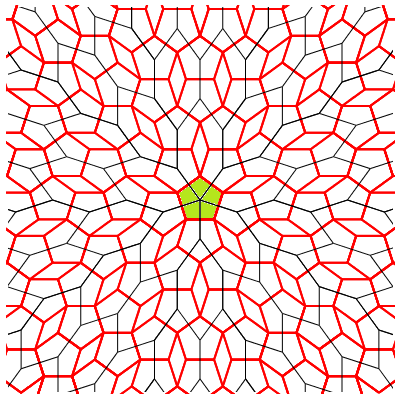 Finally, here is a picture of just these hexagons going out further. For each of the $5$ orientations, the hexagons of that orientation fall into $2$ connected components. One orientation is highlighted in blue. 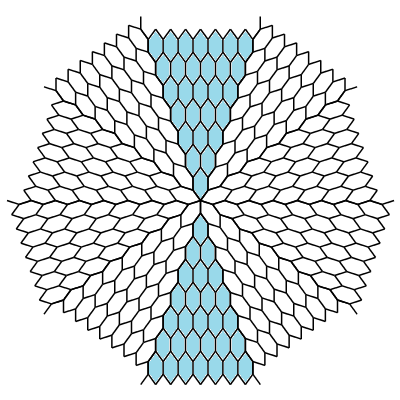 Not the answer you're looking for? Browse other questions tagged mg.metric-geometry discrete-geometry plane-geometry polyhedra packing-and-covering or ask your own question.

9
Thinnest covering of the plane by regular pentagons