How many ways can you inscribe five 24-cells in a 600-cell, hitting all its vertices?

Warmup question: How many ways can you do this?

I believe there are just two: the way shown here, and its mirror image.

But here's my real question. I just noticed that the above phenomenon has a four-dimensional analogue. The 24-cell and 600-cell are four-dimensional regular polytopes, and you can can inscribe five 24-cells in a 600-cell so that each vertex of the 600-cell is the vertex of just one 24-cell.

Question: How many ways can you do this?

To see that it's possible at all, note that the unit quaternions form a group that is the double cover of $\mathrm{SO}(3)$. Thus, the rotational symmetry group of the dodecahedron, $\mathrm{A}_5$, has a 120-element double cover that is a subgroup of the unit quaternions. This is called the 'binary icosahedral group' $2\mathrm{I}$. Its points, thought of as quaternions, are the vertices of the 600-cell, as drawn here by Robert Webb's Stella software: 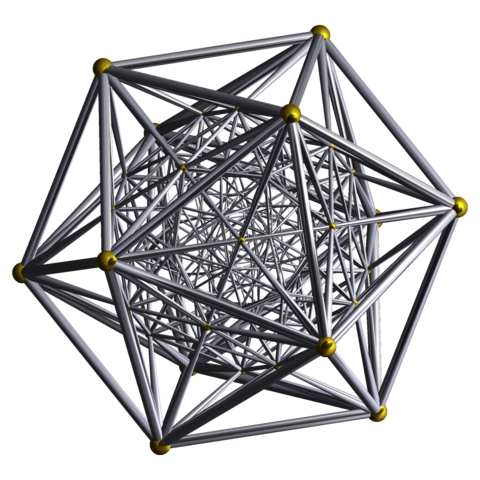 Similarly, the double cover of the tetrahedron's rotational symmetry group $\mathrm{A}_4$ is called the 'binary tetrahedral group' $2\mathrm{T}$, and its points are the vertices of the 24-cell: 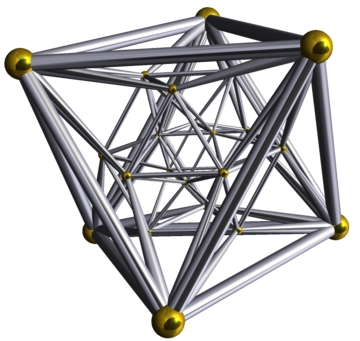 The right cosets give another method. Furthermore, there are five ways to embed $\mathrm{A}_4$ as a subgroup of $\mathrm{A}_5$, which are actually the symmetry groups of the five tetrahedra in the dodecahedron in Egan's picture above. So, we get 2 × 5 = 10 ways to inscribe five 24-cells in a 600-cell so that each vertex of the 600-cell is the vertex of just one 24-cell. I believe, but haven't carefully checked, that these are all distinct. I can't think of any other ways to do it. Thus, I conjecture that the answer to my question is: 10.

The 600-cell can be tiled by five 24-cells in exactly ten different ways. These are written explicitly in table 2 of "Parity proofs of the Bell-Kochen-Specker theorem based on the 600-cell", where you can also see an application of this fact to giving a proof of the Kochen-Specker theorem, ruling out the existence of noncontextual hidden variable theories in quantum mechanics.

The authors say that these ten different tilings were first discovered by P.H. Schoute and give a reference to Coxeter's book on regular polytopes.

This is an elementary answer to the warmup question.

There are precisely $10$ ways of inscribing a tetrahedron inside a dodecahedron. The symmetry group $G \subset O(3)$ of the dodecahedron acts on these tetrahedra. Note that $G = A_5 \times \Z/2\Z$. The stabilizer of a tetrahedron has to act by symmetries on the tetrahedron and thus be a subgroup of $S_4 \subset O(3)$ which acts on $T$. But $S_4$ is not a subgroup of $A_5$, and so the stabilizer (which must have order at least $10$ by the Orbit-Stabilizer theorem) is $A_4$, and the orbit of $G$ has size $10$, and $G$ is transitive.

Note that $U$ and $V$ give the two configurations indicated in your answer (which are invariant under the action of $A_5$). We seek the others (if they exist).

There are indeed exactly 10 ways to inscribe five 24-cells in a 600-cell, hitting all the vertices. This question was answered by Coxeter in a footnote to Section 14.3 of his Regular Polytopes, where he wrote:

However, I knew of no published proof of this fact. So, I was pleased when David Roberson used a computer to solve this and some other puzzles which I posed on my blog.

I was even more pleased when this paper appeared, claiming to give a human-readable proof:

They also claim that there are 25 ways to inscribe a 24-cell in a 600-cell, and that these ways can be arranged in a 5 × 5 grid, such that each row and each column gives a different way to inscribe five 24-cells in a 600-cell, hitting all the vertices. Moreover, these 10 ways are the only ways.

What follows are some puzzles of mine, and then David Roberson's solutions to some of these puzzles. Puzzles 1 and 2 remain open, so I'd love help with those.

If we take this description of the vertices of the 600-cell:

and even permutations thereof, we can see that there are

points of the first kind,

points of the second kind, and

points of the third kind, for a total of

Puzzle 1. Can we partition the 120 vertices of the 600-cell into the vertices of 7 hypercubes and one orthoplex?

On the other hand,

On the third hand,

I don't know how helpful this is, but (the 1-skeleton of) the 600-cell lies in a symmetric association scheme. The classes of this scheme correspond to the nine possible inner products of the vectors you wrote above (they also correspond to the nine conjugacy classes of the group $ \Gamma$). So for each possible inner product $ \alpha$, we construct a graph whose vertices are the 120 vectors above, and put an edge between two vectors if their inner product is $ \alpha$, and this gives us one class of our scheme. For instance, the 600-cell is the graph constructed in this way for $ \alpha = \Phi/2$, i.e., making vectors adjacent to the 12 vectors nearest it. But you also get an isomorphic copy of the graph of the 600-cell for $ \alpha = -1/(2\Phi)$ (this embedding gives an "optimal vector coloring" of the graph). The classes of this scheme are also exactly the orbitals (orbits on ordered pairs) of the automorphism group of the graph of the 600-cell.

This makes things a bit easier (for me) to construct the classes of this scheme in Sage. The graph of the 600-cell is built into Sage, and then I can either find the orbitals of its automorphism group, or I can compute the projection onto its second largest eigenspace. This eigenspace has dimension four, and the projection onto it is (up to a scalar) the Gram matrix of the 120 vectors above. So you can use the entries of this matrix to construct the scheme.

You can use this scheme to help with puzzles 3-6, though it seems you mostly already know the answers. I will write some things anyways in case it is of interest.

By the way, for finding and counting colorings I used a Gap package called Digraphs because Sage's built-in coloring functions are not nearly fast enough.

"The Geometry of $H_4$ Polytopes" by Denney et al. (pages 6-8) shows the answer to Puzzle 1 is no. Each hypercube within a 600-cell appears in just one 24-cell, and any two 24-cells are either disjoint or intersect in a hexagon, where each of the three orthoplexes in a 24-cell contains two of the hexagon's six vertices. Thus each of the three hypercubes in a 24-cell, consisting of two orthoplexes, contains four of the hexagon's six vertices; but since the seven hypercubes are disjoint (by assumption) there cannot be any hexagonal intersections, and so the seven 24-cells that contain them would have to be disjoint as well, which is clearly impossible.

Not the answer you're looking for? Browse other questions tagged gr.group-theory convex-polytopes polyhedra or ask your own question.

15
Are the Platonic solids shadows of 4-polytopes?
8
Has this "pseudo-quotient" of groups been studied before?
2
4-polytope with vertices at the binary octahedral group
55
Do unit quaternions at vertices of a regular 4-simplex, one being 1, generate a free group?
2
A matrix that commutes with all symmetries of a vertex-transitive polytope
10
What is the convex hull of the quaternionic symmetries of the 3 dimensional cube?
5
Embedding an icosahedron
2
Definition of "regular" in Stringham's "Regular figures in n-dimensional space"
Question feed