Planar polynomial vector field for a harmonic pair of polynomials

I am looking to learn a bit about (complex) ODEs and their interplay with algebraic geometry by some examples, but I couldn't find anything on this special case in Ilyashenko's survey on Hilbert 16 (I guess this case is too special and/or not very interesting as far as Hilbert 16 is concerned).

Nontheless, it seems very natural. If we set $\gamma(t)=x(t)+iy(t)$, this amounts to the equation $$ \int_{\gamma_t}\frac{dz}{F(z)}=t $$ where $\gamma_t$ is the curve $\gamma$ "truncated" at $t$ and the RHS is in particular real. This can be taken further, for example by assuming $\gamma$ is closed and using the residue theorem to obtain constraints on (the coefficients of) $F$.

First, this case is totally uninteresting regarding Hilbert XVI. Indeed, there are no limit cycles in such systems. The $\alpha / \omega$-limit of a trajectory is either a point or a non-isolated cycle (center case).

In addition there is a pole at infinity (if $\deg(F)>0$) with exactly $2\deg(F)$ separatrices, reaching the singularity in finite time. The bassins of attraction / center regions attached to the above singularities are delimited by the separatrices. 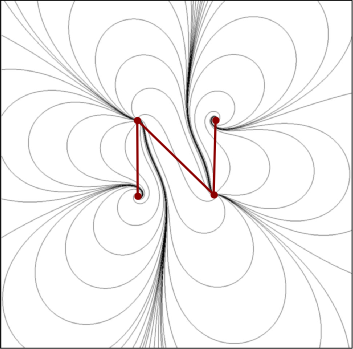 S. Smale began to get interested in the question in the early 80's while laying the foundations for BSS computational model (The fundamental theorem of algebra and complexity theory, 1981). He proposed a numerical root solver for polynomials by following the flow of $\frac{F}{F'}$. This started some works on the topic, for instance by Schub, Tischler, William (The Newtonian graph of a complex polynomial, 1988) or Benzinger (Plane autonomous systems with rational vector fields, 1991)…

In the case of these vector fields, the topological class is entirely encoded by their Newtonian graph (or the «dual» spinal graph) given by the incidence graph of the $\alpha / \omega$-limits of trajectories (in red on the picture). The main result for polynomials is that it is a tree. See e.g. Sverdlove (Inverse problems for dynamical systems,1981) and Schecter, Singer (A class of vectorfields on $\mathbb S^2$ that are topologically equivalent to polynomial vectorfields,1985) and Jongen, Jonker, Twilt (On the classification of plane graphs representing structurally stable rational Newton flows,1991).

The conformal classification has been initiated by Douady, Estrada and Sentenac (unpublished monograph, 2005) for the generic case (only focus/source singularities) and completed by Branner and Dias (Classification of complex polynomial vector fields in one complex variable, 2010). In addition to the combinatorial (topological) invariant, a complex «time-shift» (related to the integrals $\int_\gamma\frac{1}{F(z)} dz$) is associated to the separatrices, providing a complete conformal invariant.

In that latter context, the function $\int\frac{1}{F(z)} dz$ is called a Fatou coordinates. It is a rectifying chart for the vector field, and has many interesting dynamical properties.

Notice also the deep and beautiful relationship between spinal graph and Dessins d'enfants, as established by Pilgrim (Polynomial vector fields, dessins d'enfants, and circle packings,2006), related to this question.

They were also studied by physicists:

EDIT. I forgot to mention this:

Not the answer you're looking for? Browse other questions tagged reference-request cv.complex-variables ds.dynamical-systems differential-equations or ask your own question.

13
References for complex analytic geometry?
3
General form of Rouche's Theorem
12
Dynamical systems with multidimensional, complex and other exotic kinds of time spaces
9
“unexpected” residue formula for $\Gamma^3(s)/(\Gamma(3s)(e^{2\pi is}-1)) $
4
Main result of Shimura's On Eisenstein Series
6
Reference request: A collection of topologies on $\mathbb{N}$ formed via series
12
Poincaré on analytic dependence on parameters of solutions of linear differential equations
Question feed