In their paper Traced monoidal categories, Joyal, Street, and Verity described a construction of a compact closed category $\mathrm{Int}(C)$ from any traced monoidal category $C$. The objects of $\mathrm{Int}(C)$ are pairs $(X,U)$ of objects of $C$, and its morphisms $(X,U) \to (Y,V)$ are morphisms $X\otimes V \to Y\otimes U$ in $C$, with composition defined using the trace.

There seems to me to be some kind of family resemblance between these constructions. In both cases we are "formally" or "freely" adding some kind of "duals" to a category $C$ by constructing a category whose objects are pairs of objects of $C$, one treated covariantly and one contravariantly. However, the differences are substantial, and I haven't been able to make this similarity precise in any way.

It seems to me that, if $C$ is a traced monoidal category (with unit $I$) that is also closed, there is a comparison functor $Chu(C,I)\to Int(C)$, which is perhaps what you had in mind. However, this functor does not seem particularly well-behaved: in general, it is neither full nor faithful, and only lax monoidal. (It also isn't essentially surjective on objects, for whatever that's worth.) [EDIT: You're right, it isn't even lax monoidal in general, but it might be oplax monoidal.]

One way this shows up is that there is always a forgetful functor $Chu(C,\bot)\to C$---which is the counit of the adjunction---but no obvious embedding $C \to Chu(C,\bot)$, whereas there is always an embedding $C \to Int(C)$---the unit of the adjunction---but no obvious forgetful map $Int(C)\to C$. In conclusion, I don't think that $Int$ and $Chu$ are really all that similar after all.

Since you ask, here are some more details.

As you said in your question, objects of $Chu(C,\bot)$ and $Int(C)$ comprise two $C$-objects: one treated covariantly (the "positive space"), the other, contravariantly (the "negative space"); moreover, the duality in each case is given by swapping the two. So it seemed to me that if you want to highlight these similarities, one should build a comparison functor that preserves these very features.

It turns out---again, you were right about this---that there's no real reason to restrict to the case $\bot=I$; I did so only because I was hoping to build a lax monoidal functor, which would require at least a map $\bot\to I$, and was too lazy to check if the usual coherence conditions on such a map were enough to make this work. But since I've lost hope of making the comparison functor lax monoidal, there's no point for this restriction at all. (To make the functor oplax monoidal would require a suitably coherent map $I \to \bot$ instead.)

Anyways, the naïve thing to way to build a functor $Chu(C,\bot)\to Int(C)$ would be as a kind of forgetful functor, where you forget the "inner product" of a Chu space, and remember only the positive space and the negative space. Now a map of Chu spaces comprises two $C$-arrows: one between the positive spaces, and one between the negative spaces; tensoring these two maps together produces a $C$-arrow of the right type to define a map in $Int(C)$. So one can ask if this defines a functor. Amazingly, it does in the symmetric case; moreover, one simply needs to add a $-2\pi$ twist to the negative component to make it work in the balanced case. 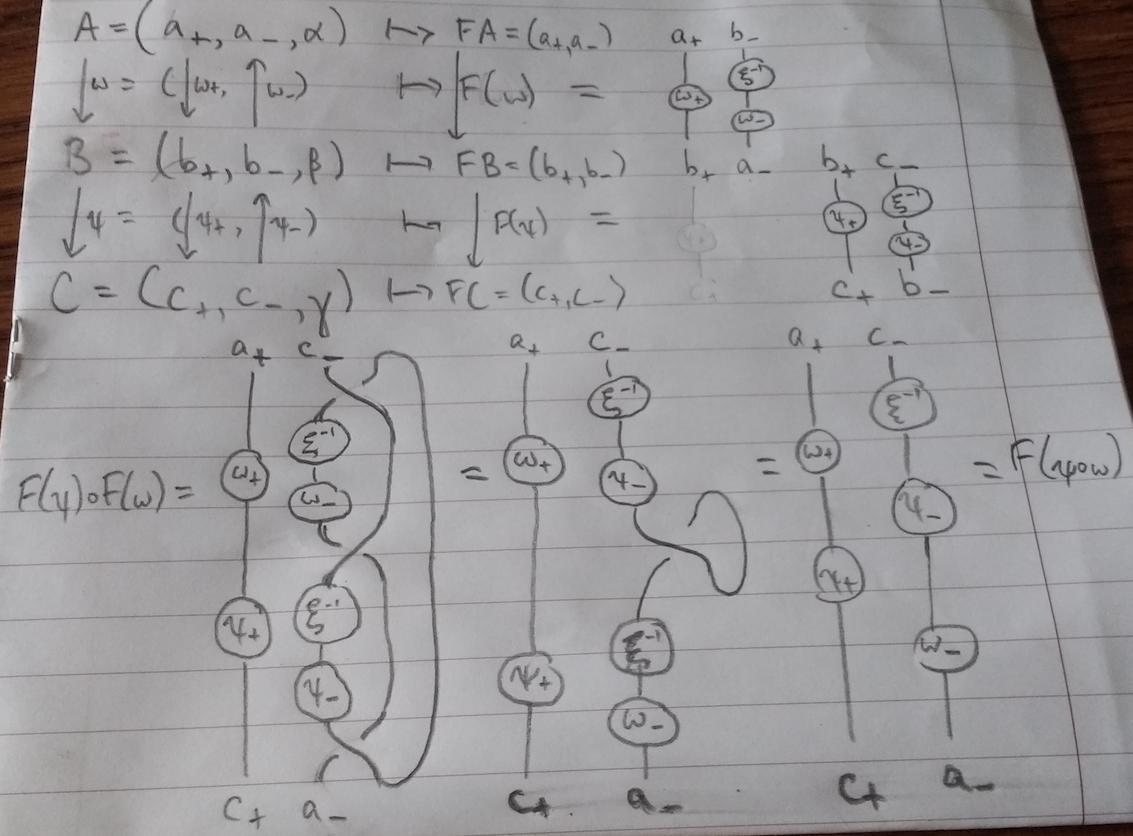