Hermann Weyl was one of the pioneers in the use of early algebraic/combinatorial topological methods in the problem of electrical currents on graphs and combinatorial complexes. The main article is "Repartición de Corriente en una red conductora", which appeared, written in Spanish, in 1923 in Revista Matemática Hispano-Americana:

together with other less known papers.

Was there a particular cooperation around this topic between Hermann Weyl and the Spanish-speaking mathematical community? Did these articles just disappear from the mainstream of mathematical research?

I am aware of papers of Beno Eckmann from the 40's (Harmonische Funktionen und Randwertaufgaben auf einem Komplex).

The Spanish paper of Weyl is on John Baez' page. There's a brand new subject called Analysis Situs it's not even called "Topology" yet, and Weyl discusses what he could absorb from lectures at ETH Zurich in five years before, in 1918.

Here's some info from the Math Biography website on Weyl:

As a privatdozent at Göttingen, Weyl had been influenced by Edmund Husserl who held the chair of philosophy there from 1901 to 1916. Weyl married Helene Joseph, who had been a student of Husserl, in 1913; they had two sons. Helene, who came from a Jewish background, was a philosopher who was working as a translator of Spanish.

Not only did Weyl and his wife share an interest in philosophy, but they shared a real talent for languages. Language for Weyl held a special importance. He not only wrote beautifully in German, but later he wrote stunning English prose...

Looks like Hermann Weyl did not speak Spanish, but his wife did a translation.

The first inkling of the modern treatment could be by Yves Colin de Verdière:

It turns out that Beno Eckmann actually asked Hermann Weyl why he published this work in Spanish, as described here and here. The answer is remarkable and unexpected (and apparently does not involve his Spanish spouse).

RK: In the hallway outside our offices was a high-tech espresso machine and every morning Beno would take a break to sit and enjoy an espresso outside our offices. The first day, I "coincidentally" joined him and he related wonderful anecdotes from 1950-1955, after Hermann Weyl retired from the IAS, resettled in Zürich, and frequented the department. The next day I resolved to ask Beno a question which I didn't think any living person could answer.

RK: Beno, there is something I really don't understand about Hermann Weyl.
BE: What is it?
RK: Well, in his collected works, there are are two papers about electrical circuit theory and topology dating from 1922/3. They are written in Spanish and published in an obscure Mexican mathematics journal. They are also the only papers he ever wrote in Spanish, the only papers published in a relatively obscure place, and just about the only expository papers he ever wrote on algebraic topology. It would seem that he didn't want his colleagues to read these papers.
BE: Exactly!
RK: What do you mean?
BE: Because topology was not respectable!

This is a relevant comment on an answer given in this thread, which the comment boxes cannot conveniently accommodate.

The summary of the 'current' given after "These days" in an answer in this thread seems technically wrong (to me): if by 'planar graphs' is meant (which is quite usual) 'planar undirected simple finite graph-theoretic graph', then this is not how 'currents' are most usually formalized these days: your definition of the 'conservation condition as ' $\forall v\ \sum_{v'\sim v} f(vv')=0$ ', with $f$ having been defined as a function on a set of unordered 2-sets is precisely the central definition of the field of zero-sum flows, which is a, admittedly deceptively similar-looking-to-the-casual-observer, interesting niche-subject mostly practiced in Central Asia; but this is not what Weyl was investigating.

The free-abelian-group-that-is-modelled-by-said-zero-sum-flows is also (as yet) rather irrelevant to topology, as it still 'awaits its categorification' (this might be a gap in my knowledge, but to my knowledge the class function $\mathsf{Graphs}\xrightarrow[]{\mathrm{ZeroSumFlowGroup}}\mathsf{FreeAbelianGroups}$ is is-not/has-not-emphasized-to-be a functor for any noteworthy category of graphs (though I don't doubt it can, rather easily, I am simply trying to substantiate that this definition is rather irrelevant to the OP proper). The main point is that with the definition in the answer, the edges are not oriented, so a natural interpretation of a direction in which the quantity flows is lacking, the possibility of having negative values on an edge non-withstanding. Again: what you defined are 0-sum-flows. To add context and a reference, let me mention that a recommendable, light-on-graph-theory-focused-on-the-linear-algebra relevant article is S. Akbari, M. Kano, S. Zare: A generalization of 0-sum flows in graphs. Linear Algebra and its Applications 438 (2013) 3629–3634, from whose abstract I take the following excerpt:

about which one should note that (0) calling an arbitrary function from the (unordered-edge)-set to the group-of-coefficients is a bit unusual, (1) the heavily-yellowed equation is essentially exactly your definition of the 'currents'. This is quite a different theory from classical simplicial homology/currents-à-la-Weyl's-Spanish-paper, and rather irrelevant to the OP's question. Please consider the crucial part of Weyl's 1923 paper: 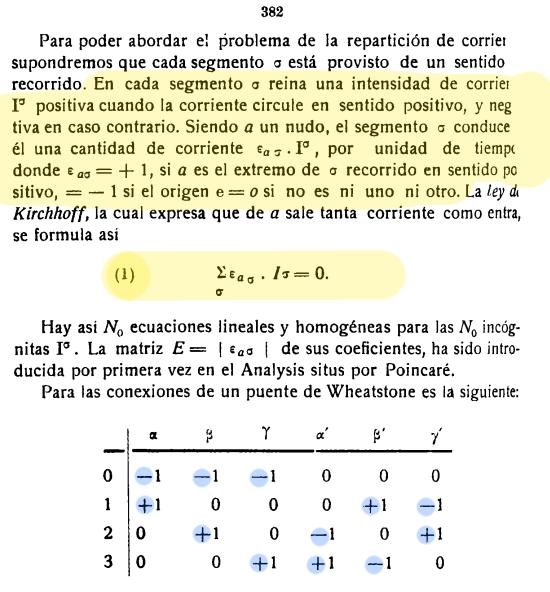 whose first sentence I now translate, for convenience of readers:

To address the problem of the distribution of current, we assume that each segment is given a sense of traversal [i.e.: Weyl unambiguously does first orient the lines, only later defines a function thereon; this is exactly good old simplicial homology, not zero-sum-flows]

It will be necessary for me to interrupt now, but let me summarize that

I am aware that Baez does it, and does it correctly, with quivers, and hence has 'orientations built-in'.

I am also aware that perhaps you simply intended your $G=(V,E)$ to denote a quiver; my little-point-to-be-made is only that this distinction will be lost on the majority of readers, and perhaps also be lost on the OP. The orientation-issue is underemphasized currently. (Whether it should be emphasized I am not sure, as the OP is asking quite a different thing from being served with a summary of simplicial homology. The OP is focusing on historical questions.)

Will not be able to respond until tomorrow.

Not the answer you're looking for? Browse other questions tagged at.algebraic-topology graph-theory gt.geometric-topology ho.history-overview or ask your own question.