I suspect this should follow from some known result in random graphs, but not sure which one.

The answer is yes.

$k=1$ is such a "constant", since, as is widely known, a uniform random tournament is asymptotically almost surely strongly connected, and therefore any vertex can be reached from any singleton $A$ you prescribe.

I do not see any point to allowing $A$ to have more than vertex. Or rather: if you have a problem which forces you to consider this, then you can be relieved: not only does there exist such a constant, but you can take $k$ to be any constant, essentially by (a slight modification of) the arguments in the reference I now give.

For your convenience, I now reproduce from 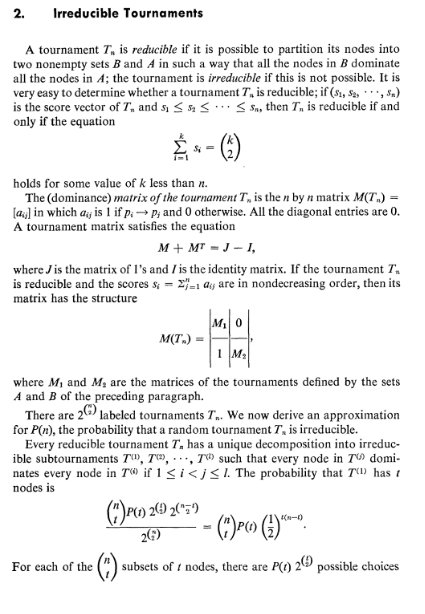 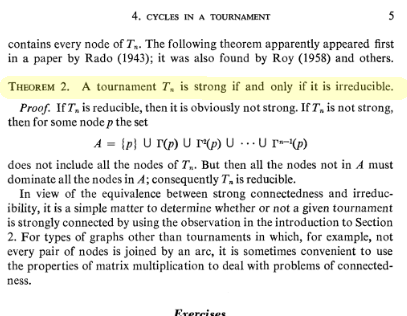 By combining the implications

Roughly speaking, what you require holds almost surely, and with exponentially fast convergence, and with easily obtainable explicit convergence estimates.

Edit. An alternative answer to the question in the OP.

One should also point out that the above, while valuable because of the structural statement

is more complicated than necessary.

Another, in a sense, more 'probabilist' way (because of the use of Markov's inequality) to answer your question is the following, which will also show that a random tournament a.a.s. is 'very' strongly-connected, in the sense that

asymptotically almost surely each vertex of a random tournament a 2-king.

This can even be passed-off as some sort of a 'paradox', as follows. While standard digraph-theoretic meaning of 'king' is 'has distance $\leq 2$ from any vertex', for the purpose of the 'paradox' and also for the purpose of the application to random tournaments (where the distance-equal-to-1-possibility fails with the uninterestingly large probability $\frac12$), we may focus on the property 'has a directed path of length exactly two to any other vertex' only. We now define

'being a defeater's defeater of participant P' := 'having defeated at least once someone who defeated P'

'weak winner' := 'being a defeater's defeater of all the other participants'

Then, as the argument below will show, the following 'paradox' is true:

In a uniform random tournament, everyone is a weak winner.

How this relates to your question: not only can any vertex a.a.s. be reached from $z$, but even be reached via a path of length two.

Since this term is usual in digraph-theory, it would be remiss not to define the term '2-king'.

However, in the argument below, and this is something I have not seen any text state clearly, the clause about there possibly being a length-one-path is irrelevant when discussion random tournaments. Its failure probability is too large anyway. Therefore, we will work with the following weaker predicate

We will now prove:

it follows that by what Wikipedia calls Boole's inequality (and most people I know call 'union bound'), it follows that the probability of $\mathcal{E}$ is

which converges to $0$ as $n\to\infty$. This proves the lemma.

1 This step is slightly non-rigorous: it should be easy to prove, though, that the event " $A=\{v_0\}$ is the root of a spanning out-tree of the tournament " is a.a.s. equiprobable with " the tournament is strongly connected ".

Not the answer you're looking for? Browse other questions tagged reference-request random-graphs or ask your own question.

0
Is there a proper way to define a threshold vertex density for a random graph s.t. the graph is fully connected?
4
Probability of two vertices being connected in a random graph
7
Random planar, bipartite graphs
2
Finding loops and double edges ASAP in configuration model random graph
2
Existence of a Connectivity Polynomial for a simple graph?
2
Difference between two largest degrees
1
Size of minimum cut in random graph
3
Unique maximum degree in tournament
Question feed