Do you have any advice to solve this type of problem (without programming of course!)?

The results below are known:

Context: We are a group of 3 French people working on it since 2007. It's a little exercise I found in my high school book (printed in 2007) which is pretty complicated. The one who created this exercise doesn't know the answer.

This question was previously asked on Math.SE (link).

Middle digits of the numbers $3^n$ are unpredictable. At least it is too hard for current techniques to say anything about them. It means that the their sum is unpredictable as well. Some good random number generators are based "digital" ideas.

If we take binary digits of $3^n$ then we immediately get generalization of $(3/2)^n$-problem which is out of reach today.

This picture is taken from a New Kind of Science: 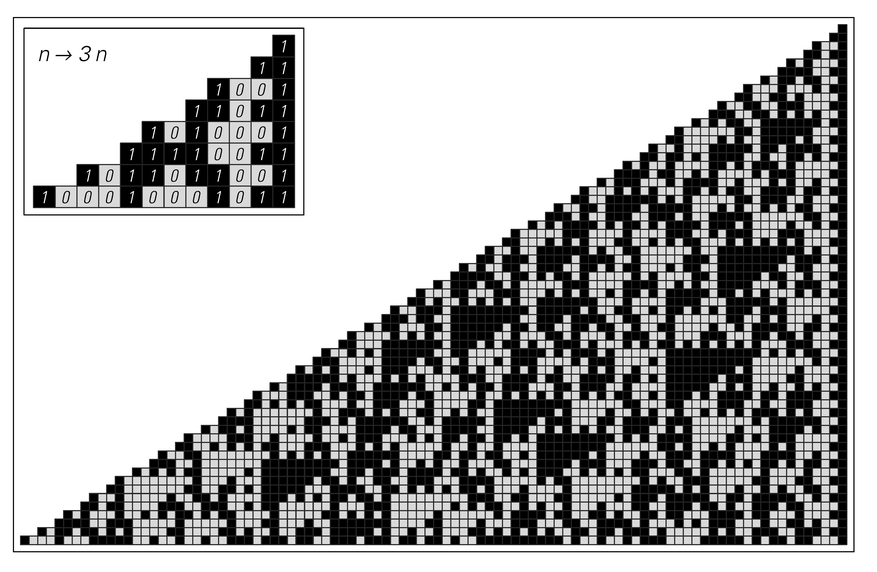 The pattern is very similar to "rule 30" picture from the same book: 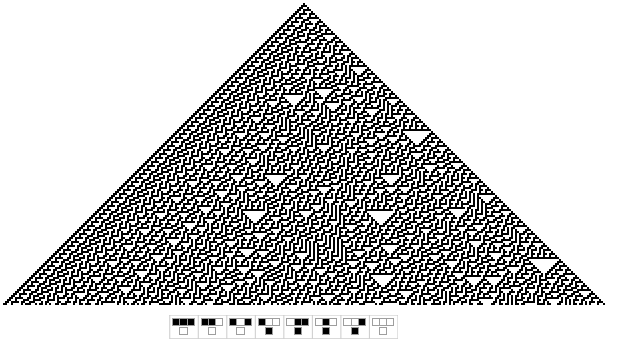 It is expected to have very good pseudorandom properties, see discussion at A New Kind of Science: A 15-Year View.

Not an answer, but a series of considerations.

One expects not only the digit sum of 3^n to be a multiple of nine (for integral n greater than 1) but also for the string of digits (in the decimal representation of 3^n) to be somewhat normal in distribution, having roughly the same number of occurrences of each decimal digit. For the given example, the actual digit sum is not far from the expected sum of 2151.

I have not observed the growth of the digit sum of powers of 3, but it should grow linearly with n, subject of course to being a multiple of 9 and not deviating far from the expected value. (Using the posted example for interpolation, I expect the rate of growth of digit sum to average about 2.1 for every increment of n, or to increase by 9 about every 4 steps of n.) Because of this, I would expect 1/7th of the exponents n to yield a multiple of 7 for the digit sum of 3^n, and to occur in runs (or near runs) of length about 4. (So the digit sum may be a multiple of 7 for n=998 or n=1002 as well.) Indeed, if it weren't for the variation, I would expect the digit sums to be multiples of 7 near n=1006.

Not the answer you're looking for? Browse other questions tagged nt.number-theory congruences digits or ask your own question.

6
Efficient (divergent) summation for sum of zetas at negative arguments?
21
Letting $S(m)$ be the digit sum of $m$, then $\lim_{n\to\infty}S(3^n)=\infty$?
5
About two 'negative' continued fractions whose sum equals $1$
0
About the sum of the first half and the latter half of the cyclic numbers of a repeating decimal
6
sum of binary and ternary digits
1
Problem related to inequality of sum of digits of power sum
Question feed