Einstein stated that he often explored and reasoned visually and spatially, and only after achieving understanding cast his insights into algebraic form. He could just "see" the answer. There are many mathematicians with extraordinary powers of mental visualization, even if they may not have been superb at symbol manipulation.

I'm interested in bona fide mathematical problems where one can visualize the answer, whether or not one later resorts to algebraic manipulation or proof. Certainly some mathematical disciplines are more amenable to the techniques of visualization (geometry, topology, ...) than others (number theory...). I'm not interested in the myriad problems posed from other fields, such as physics and chemistry, where the core problem is itself geometric, spatial or visual.

I'm interested in collecting problems in different branches of mathematics that are amenable to "purely visual" solution (or at least visual reasoning), even if formal proof may come later. Here are a few that come immediately to mind. I'll add such problems to the other subfields as I come across them. Of course the scale of these problems cannot be excessive (e.g., you cannot present a knot diagram with 1000 crossings and ask a student to visualize whether it is the trivial knot.)

My overall goal is to help students develop their mathematical visualization skills. 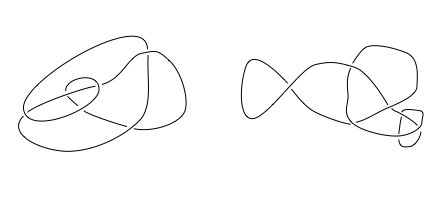 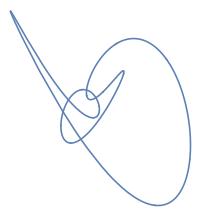 As to an example from number theory, Mumford style drawings of arithmetic schemes really helped me to get the difference between split, ramified, and inert ideals in (rings of integers over) algebraic number fields.

I work a lot on this myself, and study it some. I know visualization is not just something you are either born with or not. You can learn by effort. But I believe there is no substitute for trying, practicing, the very things you want to visualize.

I doubt that visualization per se, is an "expertise," which can be transferred from say differential equations to category theory (though these are both places i have worked on it). Whether I am right or not, what I mean to say is that visualizing one part of math only helps with others in the sense that success at one case encourages you to believe you can succeed at others.

Category theory: I would argue that commutative diagrams are more visual than the equations they represent.

Somewhere between category theory and algebra: string diagrams --- sometimes called "bird tracks", cf Penrose's diagrammatic notation for tensors in (pseudo)Riemannian geometry ---, ribbon diagrams, etc. I would say this is quite popular with people on MathOverflow, and there are various examples of papers that involve a lot of graphical notation. From my (admittedly fairly limited) background I would point to work of e.g. John Baez and collaborators, or André Henriques.

I would like to highlight a use of similar diagrams closer to my own expertise:

Quantum algebra and quantum integrability are highly influenced by graphical notation for R-matrices (cf braid diagrams) and operators built from them like the monodromy matrix, transfer matrix, etc. A standard example is the "train argument" giving a graphical proof of the "RTT-relations" (i.e. the Faddeev--Takhtajan--Reshetikhin presentation of, say, $U_q(\widehat{\mathfrak{sl}_2})$) from repeated application of the (quantum) Yang--Baxter equation. This is certainly more illuminating than working it out algebraically. A more advanced example is that suitable graphical notation immediately tells you, for example, what the correct algebraic expressions are in the "dynamical" case, with the dynamical Yang--Baxter equation instead of the ordinary (quantum) one.

Here are several elementar examples; I do not know whether they count?

From Number theory: the ring of Gaussian integers is Euclidean, because the distance from any point inside a square to one of its vertices is less than its side length. A similar reasoning may be applied to several other rings.

Recommended: Concepts of Modern Mathematics by Ian Stewart At 65, I've just started revisiting my physics degree from the '70s and trying to understand new concepts for me like Category Theory and Bond Graphs. I have been experimenting with visualising maths and apart from diagrams I have had some successes with algebraic derivations. E.g. The derivative of the exponential function is itself. Imagine the series expansion of the exponential function and then differentiate it term by term. Although I do not see this like a mental video I can imagine it enough to convince myself of the result.

17
Visualization of Riemann–Stieltjes Integrals
15
How can one characterise compactness-by-experiment?
6
Graphical representation of mathematical structures (in the spirit of unified modeling language)
120
"Mathematics talk" for five year olds
0
Visualization PDF of distribution defined by quantiles
Question feed